An interesting thing about living abroad is the different attitude people around you have to the Amerian presidential campaigns. The news coverage is pretty extensive for an election almost nobody here can vote in. I find the French are very pro-democrat. They liked Bill Clinton and didn't care about his sex life. They liked Al Gore, then John Kerry. They liked Barak better than Hillary, and don't get stuck at all on the 'first woman' or 'first black' nonsense. They definitely like Obama better than McCain, though the latter has his points and the former his faults.
There's not much they can do but like a candidate and wait around to see how it turns out.

This election looked like a contest between two reasonable candidates. Until the nomination of Sarah Palin for VP. Now it looks like McCain's Straight-Talking, Independent-Minded, Maverick façade has worn through, showing the Usual Republican underneath. She's up there on the ticket because she has a vagina. I guess the Republican party thought we'd all be so impressed with that that we wouldn't notice her utter lack of qualifications for the job. They thought the knee-jerk reaction among women would be to vote for 'one of our own'. (Not that Obama isn't a Usual Democrat after all, to be fair.)

Vote for someone (from his party) who has no idea what George Bush's doctrine on terrorism is? Vote for someone who wants to roll back women's rights over their bodies to the Victorian age? Vote for someone who claims credit for shutting down the 'Bridge to Nowhere', when in fact she was in favor of it up until the **** hit the fan, and even then simply rerouted the money to other projects in her state with no more utility?

Okay. I think we can all see where I stand on this one. Just go over to http://womenagainstsarahpalin.blogspot.com/ if you want to spend the rest of the day reading more in that vein.

And as happens every four years, I'm once again the local source for information on all things American. I'm called upon to explain what the Electoral College is (easy enough), then why we keep it (um... inertia?), and finally why the votes from a state have to all go together when that isn't the popular vote at all (got me...).

Darn it; I hate being called on to defend stuff I disagree with. Let's get back to the use of cloves in sweet foods, pumpkin as a dessert, and the joys of flavored coffees served to go. In fact, coffee to go, period. And coffee at meetings. Meetings here, you're lucky to get a bottle of water. Meetings with donuts or bagels are absolutely unheard of. A meeting where people bring their lunch and eat it at the table??? Let me tell you about being American...

In fact, in my first month here I gave an informal talk to my labmates, and since the meeting was at 8:30 in the morning, naturally I made a pot of coffee for everyone. I brought the coffee and the trayful of cups into the meeting room, served myself after inviting everyone to do the same, and set up my slides. Not a single person poured him or herself a cup of coffee, in spite of many of them being confirmed addicts of the 10 am pause. They just looked at it, and at me, like, huh? Nobody said anything. They just listened to the talk, during which I used my oh-so-handy cup of joe as a tool to slow my overly rapid english down to something understandable. At 10 the now-cold coffee was thrown out and a new pot brewed and happily downed by the very people who would not touch it earlier with a 10-meter pole. Plus some of them spent the afternoon complaining how I'd made the conference room reek of coffee. Alright, there's a cultural adjustment to make right away. I never even considered teaching them the time-honored academic tradition of the bring-your-lunch meeting.

It's true: this post has no particular story to it. I am learning to "blog", for better or for worse. Essays in my journal have a beginning, middle, end. They have a point. Blogging is just whatever is on today, finished or not. I'm horrified at the thought of a person like Sarah Palin being in charge of America should anything happen to McCain. I represent America to everyone around me, like it or not. There are myriad little cultural differences, even between relatively similar countries. All of these things I want to explore, somehow, together. I'll try to work on it and get back to you.

In the meantime, feel free to post comments. What do you want to know about?
Posted by NanU at 7:02 PM 2 comments:

See. This is why the rosemary never took off. 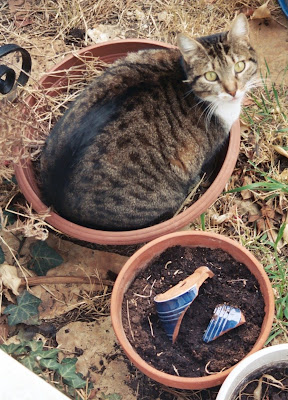 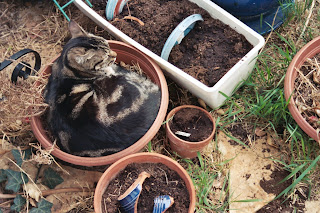 Cat magnets!
Cat magnets are everywhere. Closets. Grocery bags. Under the hedge. Under the sink. Under the bed. And now, planters you were trying to start herbs in.
Top: Natalie. Bottom: Pandemonium.