Can we hope for an end?

I'm not usually a political person at all. I really don't get it, and all. Politics is like a story somebody is telling in a language I usually know the words to, but it somehow doesn't make any sense for more than two or three words in a row.
But this season is just fascinating.
Like a slow-motion train wreck.
I've never been a big fan of the GOP, and since the Tea Party came around have been sincerely against the 'grand' old. Don't get me started on the reasons why.
The Reps are in danger of losing all credibility, what between the candidates for their presidential nomination, and the balls-up over the Supreme Court nomination. They can't stand for a candidate who doesn't stand for anything they stand for (what do they stand for, again?? pro-life, but not in favor of helping people live? oh, yes, I wasn't going to get started), but they can't just toss him out if he wins the nomination outright. Then, they're the party 'for' constititional purity, but the constitution is what they're trampling on in the court fight. Be jerks or be cowards, cowards or jerks. Cowardice is out of the question, but they've never been afraid to be jerks.

All of which has people wondering what the future of the GOP is.

Well, perhaps it should not have a future. Perhaps at last the USA can have some real multi-party politics. Not just black vs white, Us vs Them gridlock.
Go ahead, take your courage in hand and split up. If DT takes the GOP nomination, making the party into something unrecognisable, those who want the party they do recognise can go and make a new party.
The Dems could do that too.
And we could get rid of the Electoral College, have a real representational vote.
Just a thought.
Posted by NanU at 6:03 PM 1 comment:

It's the time of year again when you really have to know how to count.
I have all kinds of programs to help me with that now, so it should just get easier, right?
Yeah, right.
2015 was a year of transition. Accredited May 1st, and then they changed the list of what counts as an exam as of Aug 1st. But I can deal with that, no problem.
Most of the agencies we have to account to want to know how many patients we gave results to, for this or that gene. They don't really care how we did the work, just so we did it right.

But this one Annual Activity Declaration is super-super simplified. They want to know how many exam units we reported. Since genetics is complicated, these units are complicated.
In the newly-old way of doing things, you'd go through a 5-step process about 40 times before getting the whole result. I've got a formula to convert one BRCA1 sequence test into its component units, and another for the quantitative test for the same gene, and so on for all the others. Say, 67,583 beans for 2014.
What happened in August was they changed the units around. Some got merged into super-units, and others were just eliminated. So halfway through the year, suddenly a test worth 950 beans only counted for 6. We had a slow start to the year for various reasons, and churned out two thirds of the lab's activity in the last third of the year. But if you just count the number of beans, it looks like the opposite.

It's like they're wanting to know how much money is in my pocket, by asking only how many bills there are.

So fine. With that declaration we're sending an explanatory table, calculated the way the government wants us to do it now, and also what would happen if we did it the old way. No, we've not been slacking off, it's just we don't deal in $1 bills any more. Got change for a 50?

But then the other thing is really annoying.
We have to declare how much of our activity was accredited. Now we are accredited, there's no saying 0. That was easier, but much less fun.
My boss likes to count it this way: of all the reports we signed out, about 70% included a test we are accredited for.
Me, I like to be more accurate, and since those reports included both the accredited sequence test plus the non-accredited quantitative test, the number comes out to be 33.4% of all tests were accredited.
The agency in question, however, says right in black & white in the instructions for bean-counting that to be counted as an accredited report, all of the tests in the report have to be accredited. That comes out to about 1%.
70 or 33.4 or 1, all for the same thing.
Posted by NanU at 6:25 PM No comments:

Not much new going on. The republican primary race is like a long hallucination. I've seen some quotes put up from the Reagan days, and from the Reagan-Bush debates that show the GOP was a far different group of people just a single generation ago. Stuff they were saying then would be considered lefty-liberal today. What happened???

But anyway, I've been on vacation for a week, Off to the south of France and the Card Player's home territory around Juan les Pins. It was nice to relax and get a bit of sun. Plus, we did our part for the economy: came home with marmalade, pottery, glass, and wine. Resisted the paintings, and the small Calder mobile that would really be nice here next to the couch. Yeah, in my dreams! 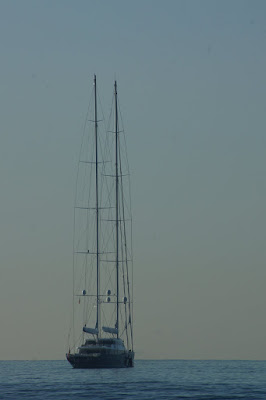 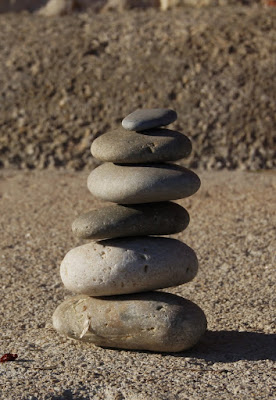