Sometimes it is better to just bang one's head against the wall.
Years ago, when L was hired, we knew she didn't know how to read DNA sequence, so we spent considerable time showing her how. At the time, though, we weren't very good at documenting all the different training sessions and tutorials and certifications.
Now we are.
Since forever, however, all our sequences have been read, independently, by two different technicians, and every disagreement is judged by a third. So if somebody misses something, there's a backup, and we really don't miss very much.
In the early summer we found some problems in some archived data, and we decided to give all the techs a test of 100 sequences to read, a new training session, with a quiz afterward, and then another test of 100 sequences. So today I should be able to count on all of the techs to read sequence. Even the newest tech has been on the job for at least 3 years.
There will always be things skipped over. Nobody's perfect, and even I have passed over variants that were right in front of my eyes. So I understand the problem. An error every 500 sequences seems reasonable.
So.
There's a series of samples just finishing up in the lab, and I took the page for the 2nd read myself just to get things going faster. Families are waiting for these results.
70 sequences, and the tech had either not- or mis-noted eight neutral variants.
Now, neutral variants have no effect on the results (they are, after all, neutral). But they are an indication of whether or not the tech is paying attention to the sequence she's reading. Any base change could be important. It's obligatory to note them all.
I made a tic mark next to each discordant result and put the tech's page back in her folder for her to finish her analysis (there were 7 sequences she hadn't gotten to yet). I haven't had the chance to talk to her yet, because some days she's not here, others I'm in meetings all day. So tonight I went to see her progress, and yes, she had correctly noted all the variants in the sequences I had pointed out. So she was aware that she had made a bucket-load of mistakes. And she was aware that it wasn't one of her buddies that found them, but the boss. So you'd think she'd take special care to finish those last 7 sequences.
Two additional errors.
Head meets concrete.

Just to let you know how tortured things are, the heater problem was in fact a water problem after all. With the flow of hot water being partially blocked somewhere, the heater didn't have any water at one point, and had to shut itself down. Otherwise there'd be some kind of meltdown, and that would not be good.
There seems to be enough flow now to keep everything going, and I can take a shower if I'm patient. Even had a bath on Sunday, though it took ages to get a worthwhile amount of water in the tub. The water cools down considerably while waiting so long, even with an insulating layer of rose-scented bubble bath, and I had to top it off with a large cauldron of boiling water from the kitchen. Must remember to up the maximum water temperature...
But I had my bath!
And it was good.
Saturday morning we went looking at mirrors and bits of shelving or cabinetry. I found a mirror I really liked. They had little cabinets just the right size to go with it - not too deep because the space is quite narrow - and I really would prefer to store the usual cleaning products and miscellaneous bottles & tubes behind a cupboard door, but I really don't like the doors they had. So we didn't get anything.
There was some thought of trekking to Ikea, to see what they have there. But it was well after 11 already, so lunch + bridge playing + looking up the catalog online & only driving the hour to St Etienne on the toll road if they actually have something I want to buy seemed like the better plan. (Yeah, like Ikea will not have anything I want to buy!)

Sometime during the week, the plumber should come by and then everything will be perfect in that particular part of the house.

Then we can get on to the kitchen...

Wednesday...
Tile! Tile is good. Sink & toilet would be even better, but they are still in the bedroom. 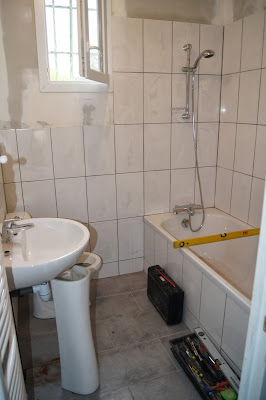 And here we are Saturday evening, all finished. I'm in charge of any decoration. 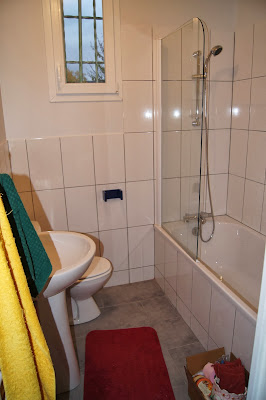 In moving my box of bathroom stuff back into the bathroom, it has been noted that although the room is much bigger than it was before, there is actually less storage space. The little corner shelves I disliked so much have gone, but they were handy. And now the toilet has taken up residence in the space I used to have a small but useful shelving thingy.  I can hang a towel on the new towel-heater (yea! heat!), but that's it.
And I have no mirror.
Oh, and the toilet seat is gone.
Oh, and the rod that holds the toilet paper in the toilet paper holder is missing.
So. Looks like next Saturday will be spent on these issues.

But wait!
That's not the whole saga.

Last Saturday evening I moved back into the house, and everything was great. Nice and toasty. Indoor toilet.
Then Sunday morning, no hot water. The place was still warm, though, so on the phone to my landlord we thought it was a plumbing thing. So he arranged the plumber to come back Monday. But then, things started to cool off considerably. And it was noticed that the heater was no longer heating. The pilot was out, and Jean-Philippe and I could not get it relit.
Ah.
Cancel the plumber. A heater problem, that will take a little longer to get fixed.
That was fixed on Thursday, and I again moved back into the house. Indeed, when I got home that evening, the place was tropical! My landlord said it was so cold inside when he was there for the heater guy that he turned everything up full blast.
I think we can tone that down just a bit.
So I'm sitting pretty, hm?
Er, now there's a small issue of water pressure for the hot tap. Cold, plenty of pressure. Hot, just a dribble. Enough to do dishes with, ok, but not enough for a shower.
Guess we'll be getting the plumber out here after all.

I spent Sunday rearranging the house - people were coming on Monday to presto-chango my bathroom into a properly functional space, and that meant moving a lot of stuff around.
At first I was thinking, well, they'll disconnect the toilet as late as possible, and install it in its new position as early as possible. I can take a shower at work if need be, and the house would only be un-livable for a couple of days. Yeah, sure.
Enlarging the bathroom means shrinking the bedroom, so everything in there had to go, except for the bed and the armoire and one of the catstands. All that got tossed into the library/guest room. Really just tossed. I had been thinking I'd be staying in that room during part of the remodeling, but gave up on that in favor of staying with Jean-Philippe.

Monday night there were new items in the bedroom: 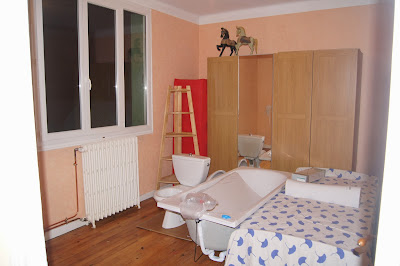 And the sad, sad bathroom, here it is all empty: 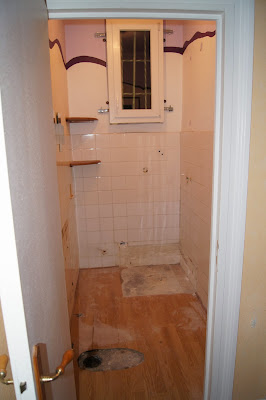 It used to be lavender all over which is far too much lavender for me, thus the white about as far as I could reach. Not so easy to get a ladder in there while it was still all encumbered with various plumbing fixtures. When they installed new windows a few weeks ago, it was really strange to see the one in the bathroom not set into the wall, but sticking out into my shower about 3 inches, with these ugly braces keeping it there. I had always known the insulation in this room was poor, but that first shower with the new window showed me just how much - with the door closed, nothing dries in there any more. The old window leaked so much it may as well have been open.
Two days later: 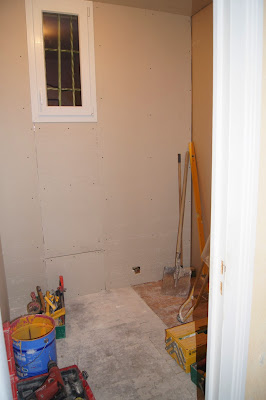 Another day, another step forward, but it's time to break for the long weekend. 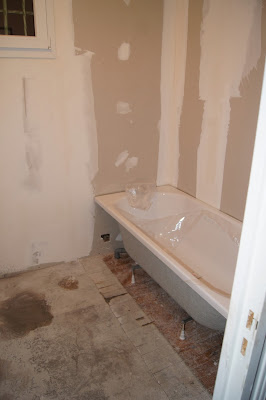 Yes, there is a bathtub in the bathroom!
Not connected to anything yet, but it's in there.

Oh, I know. I'm such a tease.
Come back with a whole series of posts about Italy, just like I'd be back to blogging regularly, and what do I do but up and disappear again.
This is because the times where there's lots to say are the same times there's no time to say it.

Patience, please. I have a whole new saga for you.