Where's the spring this spring?

All this water falling from the sky these past two months has done wonders for the weeds. But just try to get some tomatos going.
The veg patch is a sad, sad affair this year.
Potatos are up all over the place, even outside the area I planted them. They're going strong. It's a good thing I like potatos.
Coming along behind are the peas. They took so long to peek out of the ground that I planted a second patch (and indeed the first batch never came up), but now they seem to be doing alright. But what of the onions, radishes, carrots and green beans I seeded at around the same time?
Hmm?
Some beans finally put out two leaves. Yea! But then, the plants started looking sickly and yellow, and now all the bean plants are gone. Mind you, the beans and peas were mixed in the same area, and the peas are doing fine, as are the random potatos resprouting from last year. And the weeds in the patch are going great between weedings. It's just the beans.
Carrots?
Not to be seen.
Onions?
Not a one.
Radishes?
Okay, there are some timid radish leaves in one corner of the radish patch, and they are looking rather eaten. But there might be some radishes.
The only other thing I planted from seed was the corn, and let's not even go there. I love corn on the cob in the summer, and I planted plenty. Less than a dozen plants came up, all pale and spindly. None have gotten beyond two tiny leaves, and a few have disappeared in the past week. Forget the corn.
Meanwhile, the rhubarb is as monstrous as ever. No problem there. My garden has a rather selective growth deficiency.
I started tomatos, zucchini, squash, and cucumbers in little pots indoors. Eventually they get too big to do any better like that, and I transplant them outside. And they promptly stop growing. The tomatos were nearly killed by something underground, and have since been hanging on at roughly the same size they were when I put them out there. The two zucchini disappeared altogether, and the two squash nearly did but are now hanging on with two or three small leaves each. Cukes: one gone, one going.
I think I will be getting my veg at the market this summer.

I don't mean to be snarky, I just need a place to share.
I'm writing this paper with my statistician colleague. He's done a lot of population modelling, adding in mutations that give cancer at different ages, and how those mutations disappear if the age at cancer overlaps the age at which you can have kids, and figuring out how big a fertility advantage you need to balance things out so the mutations can persist over generations.

Yeah, exactly the kind of mutation that Angelina has.

So he gave a 5 % decrease in the miscarriage rate for mutation carriers (there's some evidence for fewer failed pregnancies in carriers), and his population grows a whole lot more. That's fine - you've got more kids being born. But it's a big effect.
So I'm thinking. The base miscarriage rate was set at 20 %. He said he decreased the rate by 5%, normally meaning that 20 % is reduced by 5 %, which gives us 19 % for the carriers. Now, that 1 % difference is pretty slim to change the population size by such a margin.
He must mean he changed it to 15 %.
Well, OK. But it's a 25 % difference (20 becomes 15).
Who's the math person here?
Just sayin'. You gotta be careful with what you mean, and just as careful with how you say it. 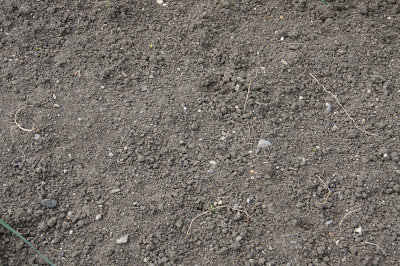 There it is: the corn patch.
The smooth, plant-free aspect of this patch makes it the favorite rolling-in-the-dirt area of the Frumious Bandersnatch. 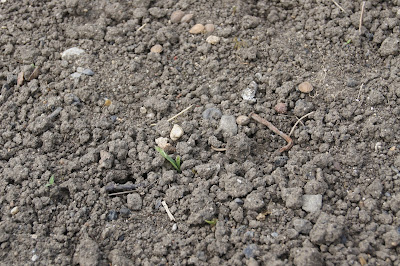 After a fairly warm month of March, leading all of us into spring early, with anticipations of all the warm, sunny days to come, spring has kind of stalled. It's been cold, and often rainy. There have been some nice days, enough to get out there and plant all the different things I like to eat over the summer. But since then, I've been waiting. And waiting. And waiting for something to sprout. I was just about to look for a non-wet day off to plant something else in the still-bare corn patch, when lo & behold, a couple of shoots came up. They're still small, and most of the patch is still bare, but there's hope for corn still. 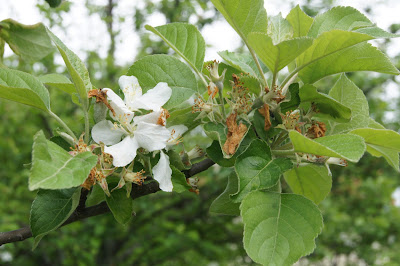 The trees have been going strong, though. The three remaining apple trees have set a lot of fruit, far more than last year. 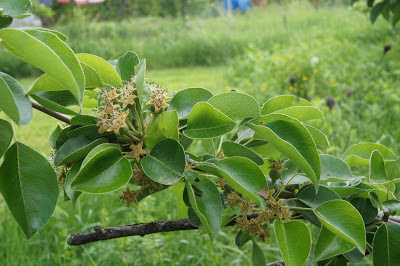 For the first time, the little pear tree is getting into it. Trying to make up for bearing nothing at all last year, I think. A lot of fruit trees alternate off & on years. This year is ON for apples, pears, apricots and cherries, and OFF for plums (thank goodness). 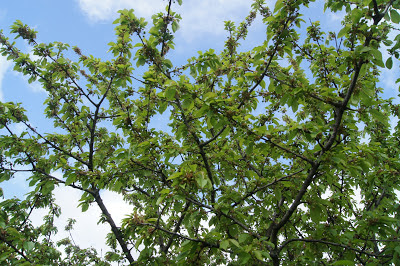 Hard to tell from here that the cherry has more nascent cherries than leaves. 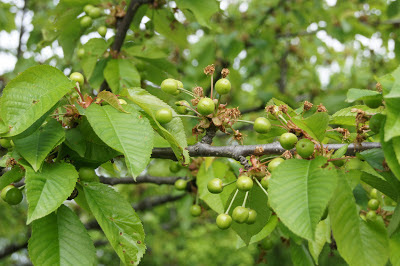 But yes. In a few weeks there will be more cherries than I will be able to deal with. The trees are so big that even in an off year, for the two weeks or so that the fruit is ripe but not too ripe, every day I'm picking cherries or pitting them before freezing or making jam or making dried cherries or whatever else I'm doing with them.
So I'm sure that spring is fully here, as the fruit gets bigger and the nights come later and the lawn needs mowing more than once a week. Still waiting for stuff to happen in the veg patch, though. The weeds are coming up just fine - why not the beans?

Time to admit it.

I've been getting old lately.
Actually, I'm getting older at the same rate I always have ever since I was born: one day per day.
Though if you figure it another way, I'm getting older more slowly than ever if you figure each new day proportionally to the accumulated days already past.
So it's all fine.
Until you hit one of those milestones that bring you face to face with that accumulated pile. For a while now I've noticed how tired my face is by the end of the day. And I just can't read the fine print any more. Certainly not in the evening.
So I was at the store for catfood and etc the other day, and noticed the rack of reading glasses next to the sunglasses. Aha. See, if I have to make an appointment somewhere it'll be months more before I do anything about this. But if you present me with a convenient bunch of cheap reading glasses, no fuss, no examination, just another grocery store purchase, well, then I might just get some.
Then I put on a pair and read something, and was astonished at how big and clear everything was! Wow!
Yeah, I guess text used to look like that all the time. Bad eyes have crept up on my so slowly I just didn't notice. 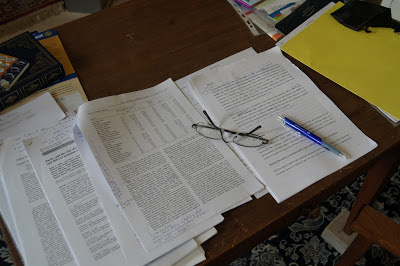 I suppose I'll be getting used to these things.

oh, dear, has it been that long since the last post?
I've been meaning to, really.
Some time ago, I went out and took pictures of my cute little rhubarb plant, before it re-became the monster it often is. And then I realised that the memory card was not in my camera, but in my desk at work, and you know how long it can take to bring such a small, insignificant, easily fits in a pocket, item home from work. Weeks!
As the size of the beast can now attest: 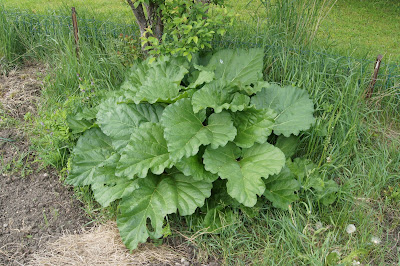 So naturally I took a knife to it.
Gotta get some sunlight down to the spindly little stalks underneath, all overshadowed by the first ones to leap up. 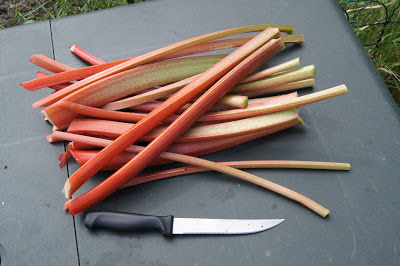 My colleagues will be happy. 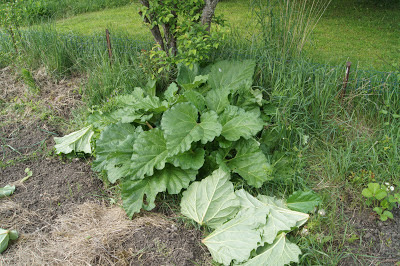 And yet, the beast hardly noticed.
Posted by NanU at 12:57 PM No comments: