In the summertime when it's hot out, I like to keep the kitchen door open, to get some air moving between there and the bedroom window on the opposite side of the house. I suppose opening windows in the kitchen and dining room would be just as well for the air and avoid certain problems. But that's too much work. My plants, of which there are many, live in front of the windows. The windows all open inwards, so opening a window means moving aside everything in front of it.
Nah, that's too much work. And besides, where would I put it all?
So the windows stay shut, except for the one in the bedroom, and the door stands open.

Natalie knows she is not allowed to bring her toys into the house, but Sunday she did anyway.
She came in with a young shrew, which she let go of before I could shoo her back outside. She let it go under the dining table, in the forest of table and chair legs, and the quick little thing made it to the safety of behind the armoire before I could get to it.

Since then I have had a shrew loose in my house.
Last evening about 10 it ventured out for a stroll around the dining room, but made it to hiding in time. I hoped it would make a dash for the open door, but maybe there's too much open territory to cover.
All three of the cats were in all night, and for a few hours there was quite a lot of fun for them as the shrew would come out and then be pursued screeching by Sienne or Natalie. Bandersnatch could not be bothered. It's amazing how much noise an animal that small can make.
Nobody caught it. The poor thing, if only I could get it to go outside. Being chased by two cats can't be much fun, and there's not much for a shrew to snack on in the house.

I wish the french would catch on to the idea of screen doors. Useful things!
Posted by NanU at 1:23 PM No comments:

Finally a good use for it

Apparently, slugs do not like rhubarb any more than I do.
In fact, they seem to like it even less.
This seems odd, given that the undersides of the rhubarb leaves often shelter a goodly collection of snails, and snails are just slugs with shells, aren't they?
Ok, not quite.
So JP was putzing around online, as he often does, looking for ways to keep our garden 'bio' without sacrificing all the goodies we want to eat to the wildlife that also wants to eat them. We already gave in to anti-doryphore product, after all, and it's a slippery slope.
The site said you could take a kilo of rhubarb, let it macerate for 3 days in a couple gallons of water, and then spray the stuff on the garden each day for three days.
Alright, I can do that.
I cut up an unweighed bunch of rhubarb, and let it soak in a casserole. After 3 days at room temp, there were all sorts of fungal colonies floating around, and the rhubarb-associated bacteria were going strong. I wonder what part is it of the plant that slugs don't like. Perhaps I should boil it first and then let it sit the 3 days. But what if it's the culture of one of the fungi that's the active part, and being too clean would ruin everything...
Well, whatever. I bottled up some and sprayed the garden with it on Wednesday evening. I only saw one slug at the time (they tend to be out a lot more in the morning, as you might imagine), so I doused it.
It did not seem to appreciate this.
At all.
Then last night I went around again, with an even funkier spray bottle of rhubarb soup. This time I did not see any slugs at all. As I said, however, the evening is not the best slug-observation period. So I will pay attention tomorrow morning whether or not there are the usual number of slugs on the salad and in the potatos.
Posted by NanU at 1:31 PM No comments:

We've been making the rounds of the local bridge festivals, and the latest one was at Puy en Velay. JP had never been to the Puy before, so we went early and had a wander around. 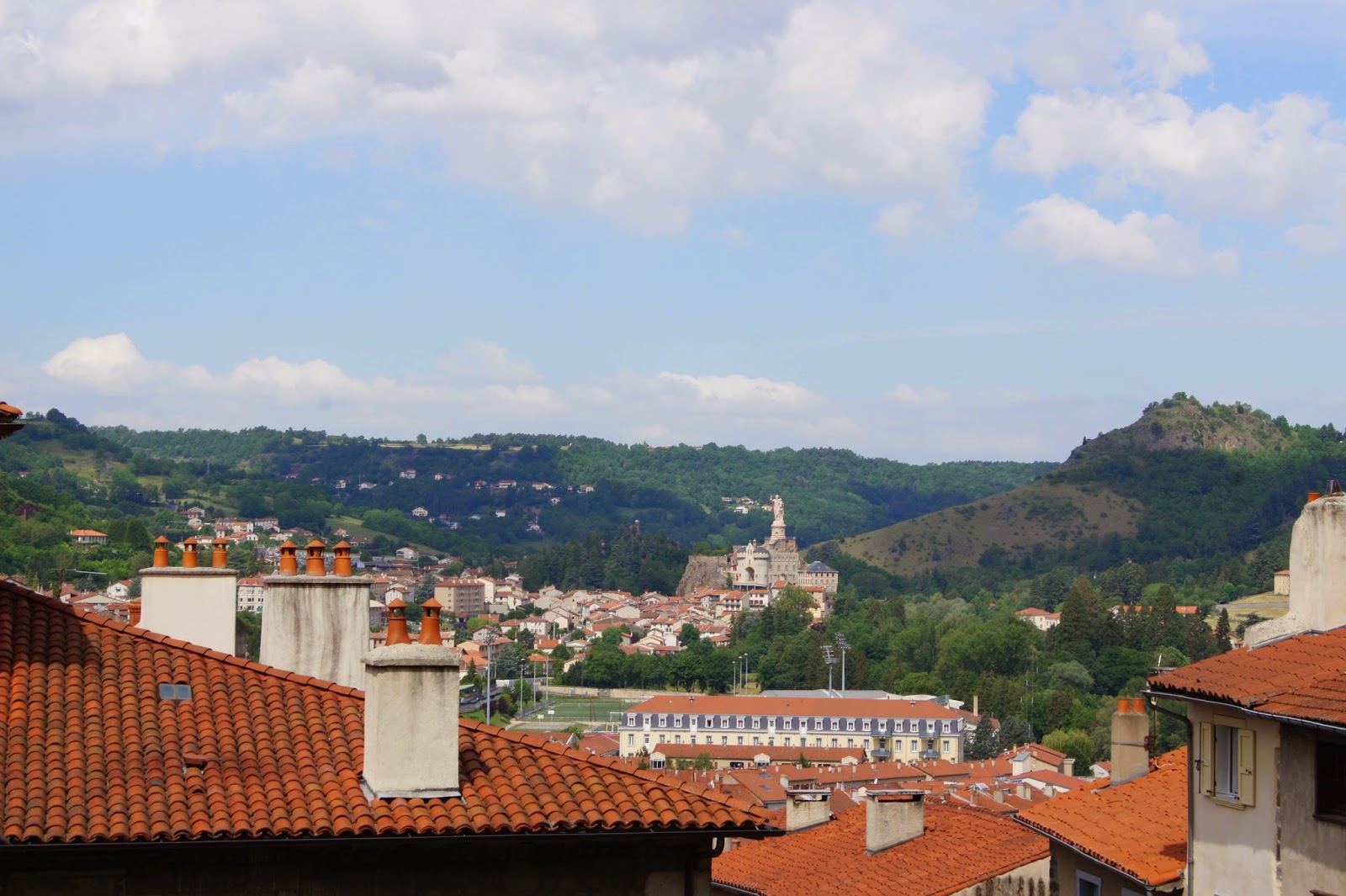 It's quite a vertical place, with several of these sharp rocks around the valley, where people have stuck a chapel or a statue of the virgin or a fortress. 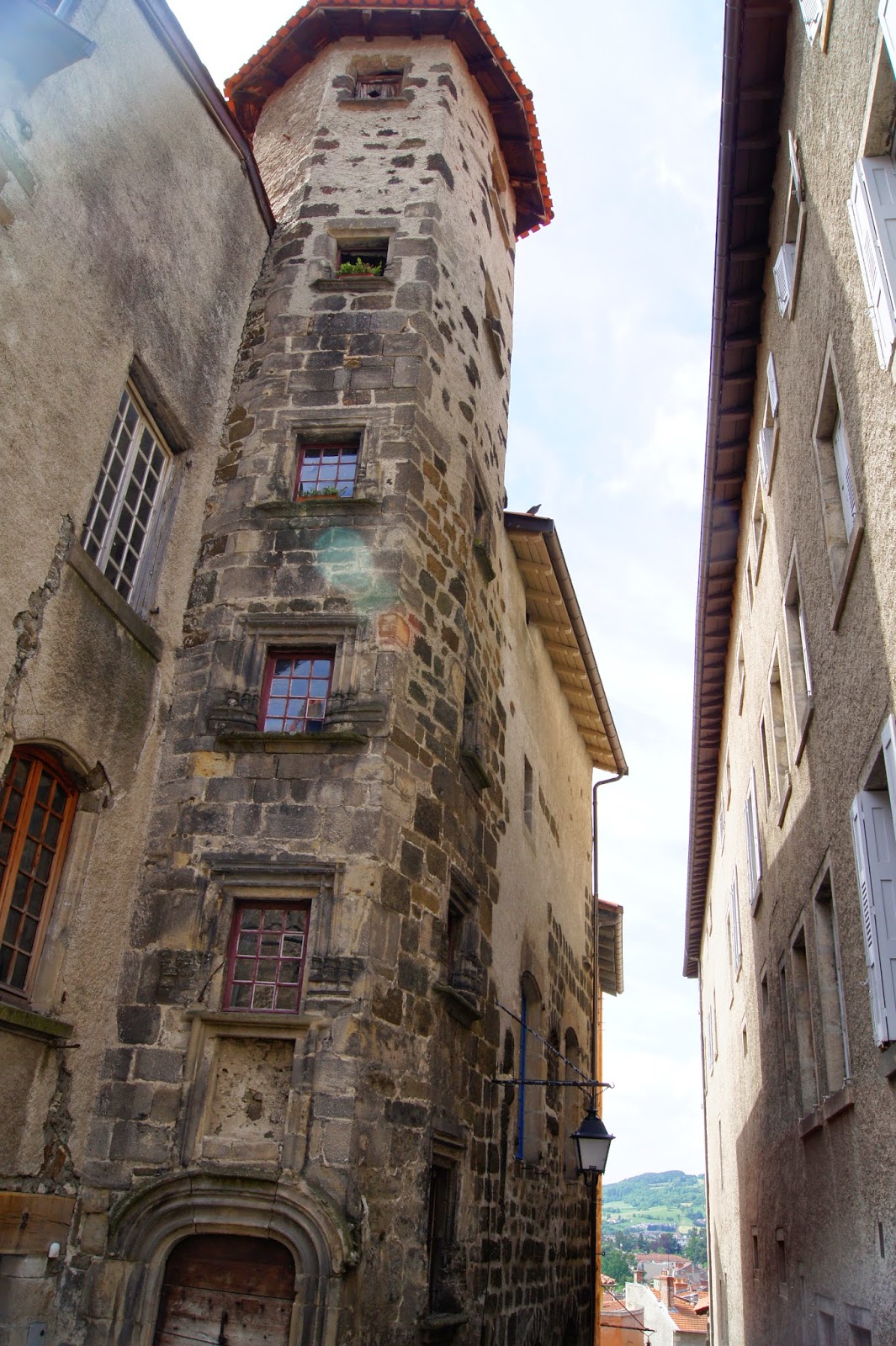 The medieval town center is nicely preserved, with plenty of flamboyant gothic restorations. 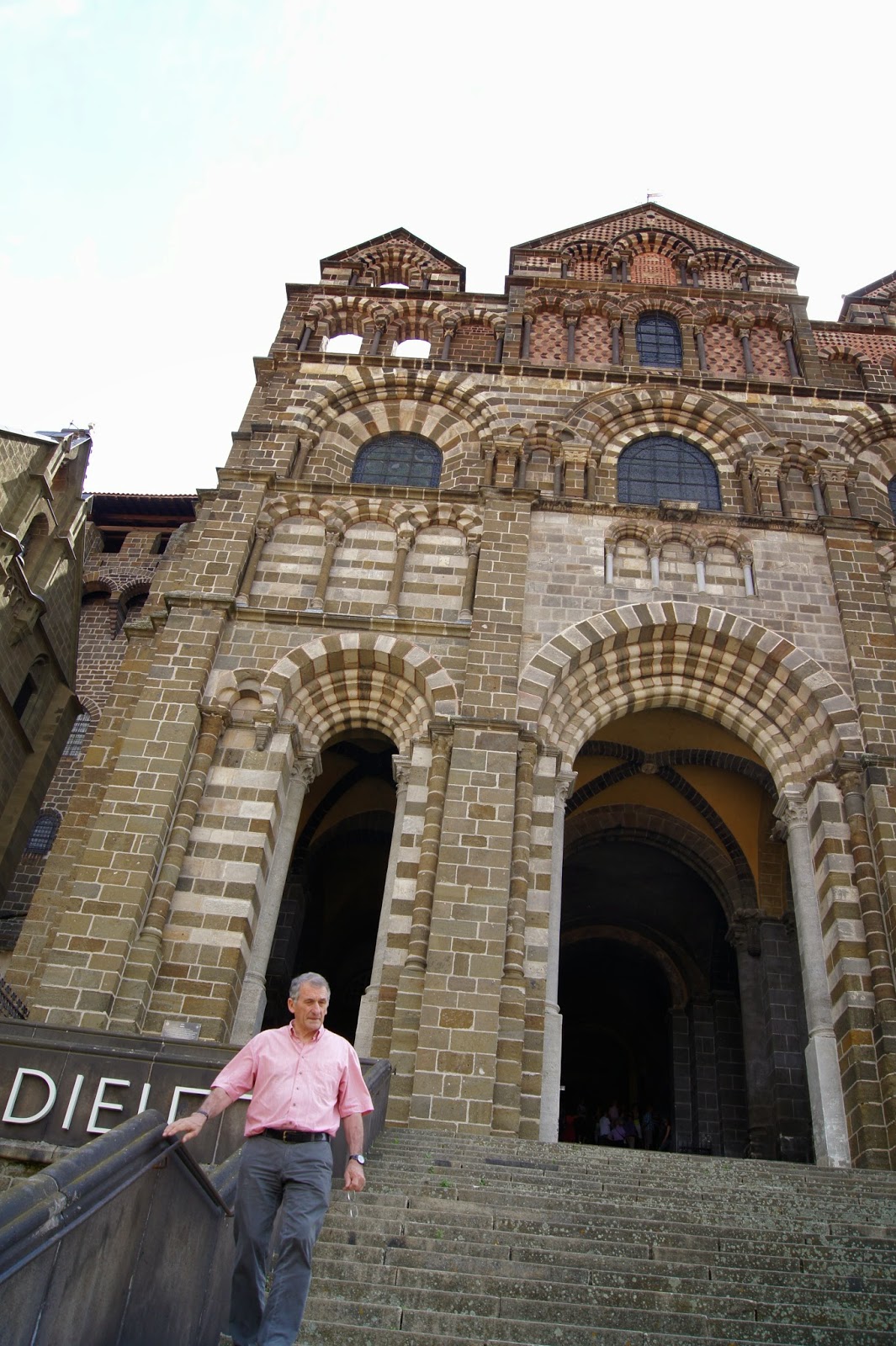 The cathedral is impressive and very odd. The stairs take you an entry in the center of the nave, not the back of it. 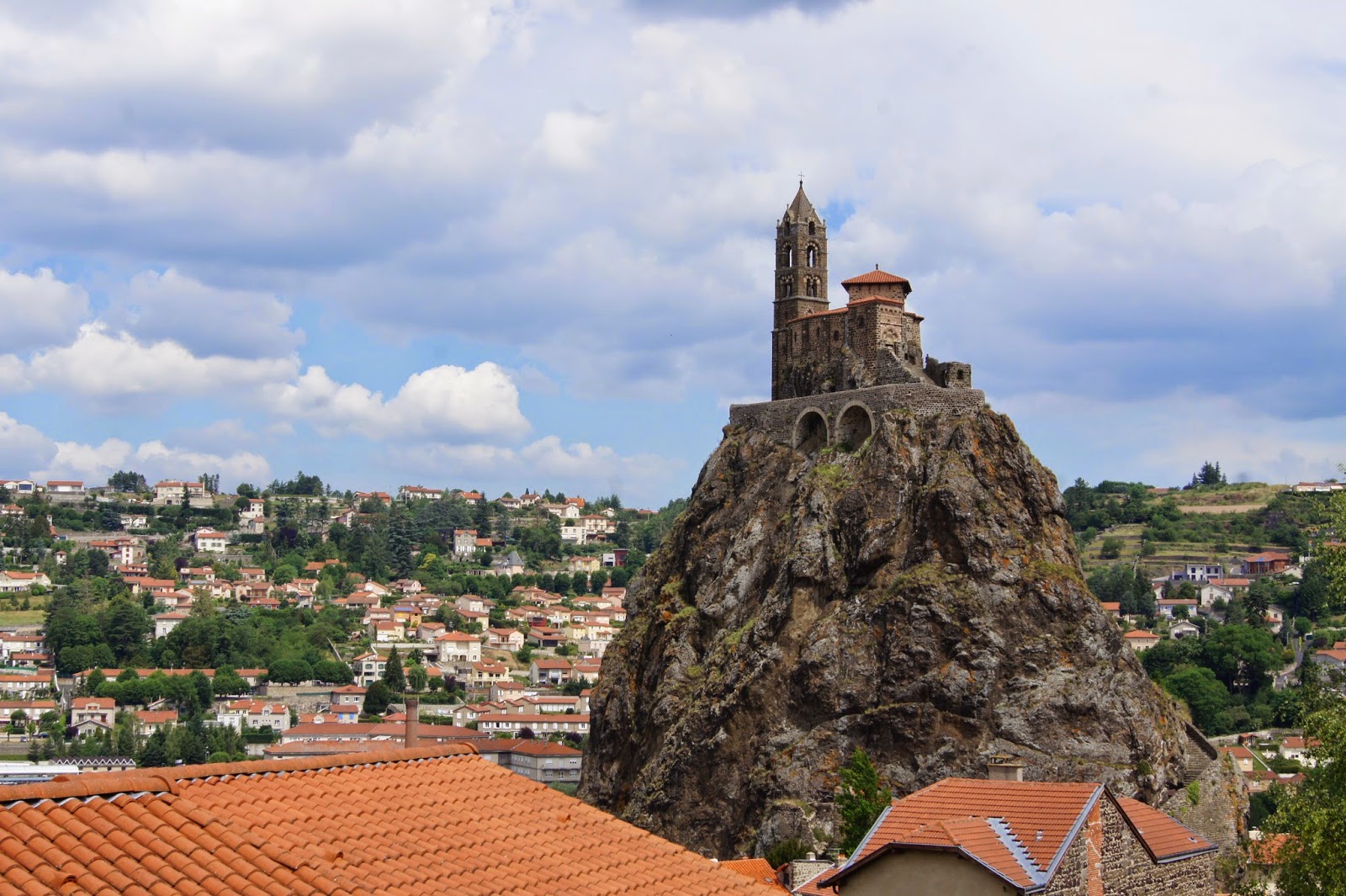 Another of the perched churches, St Micheals. I wanted to walk over there, but it was getting on to noon, and you know how JP gets concerned about being late for lunch. ;-) Yes, well, we don't want to eat in a rush, and we had to get to the tournament site early because we hadn't pre-registered.
They had some unusual success this year, and with unregistered people arriving at the last minute, the referee had to actually turn a few away. Not enough space. There were in fact not enough bidding boxes to go around, and at two tables we had to share. Perhaps we'd have been better off giving up our seats to the latecomers and having a nice hike around town, because we played horribly. Not every hand was a catastrophy, but there weren't many teams to do worse. Just not our day for cards.
Posted by NanU at 1:04 PM No comments:

Time to adopt a hen

Facebook post: My garden has been elected Best in Aubière (!!!yea!!!), by the Doryphore Proliferation Society.
I got 9 likes, which is a lot for me. I'm flattered, really, and particularly enjoyed the request for photos. So here they are: 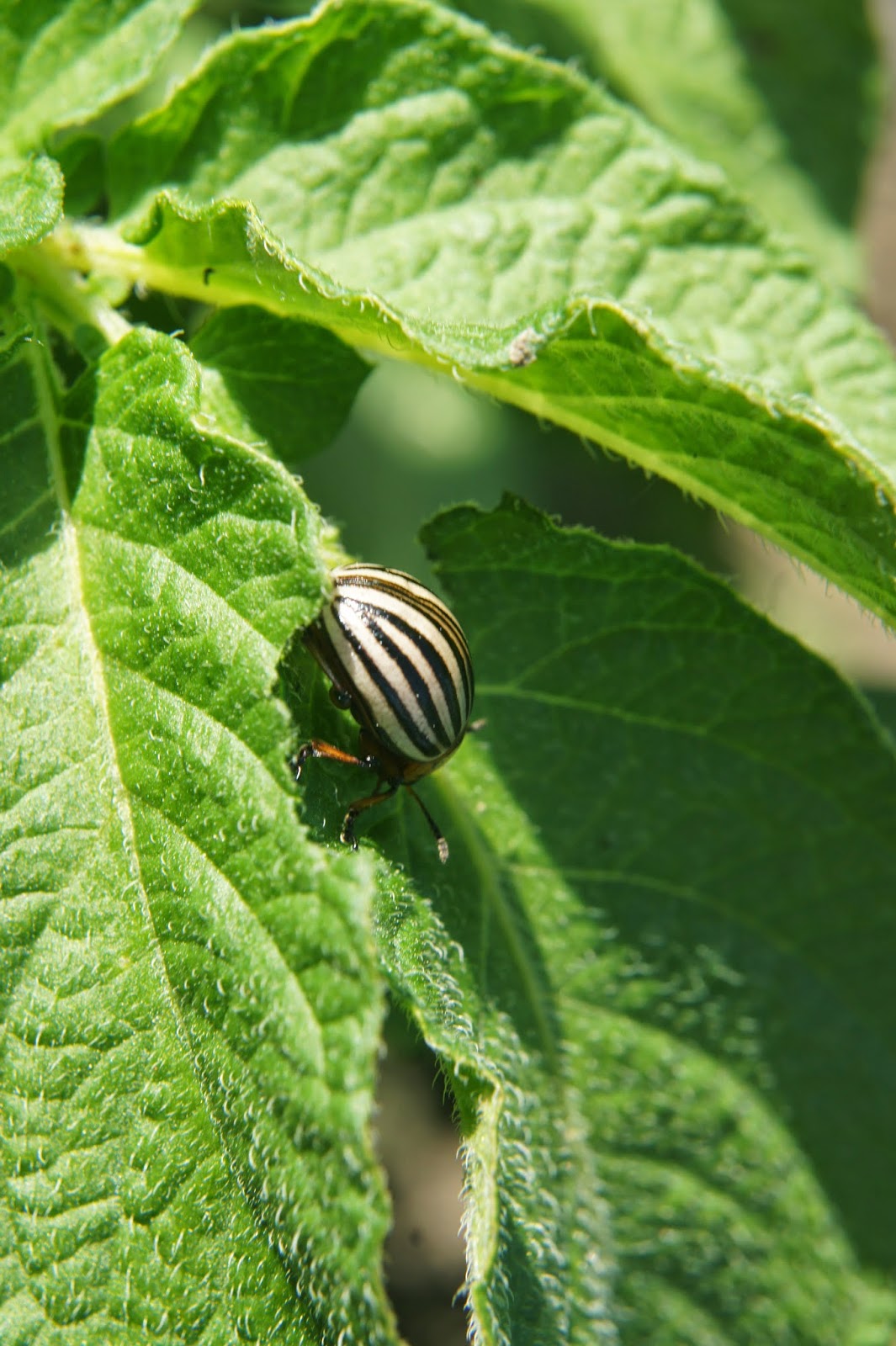 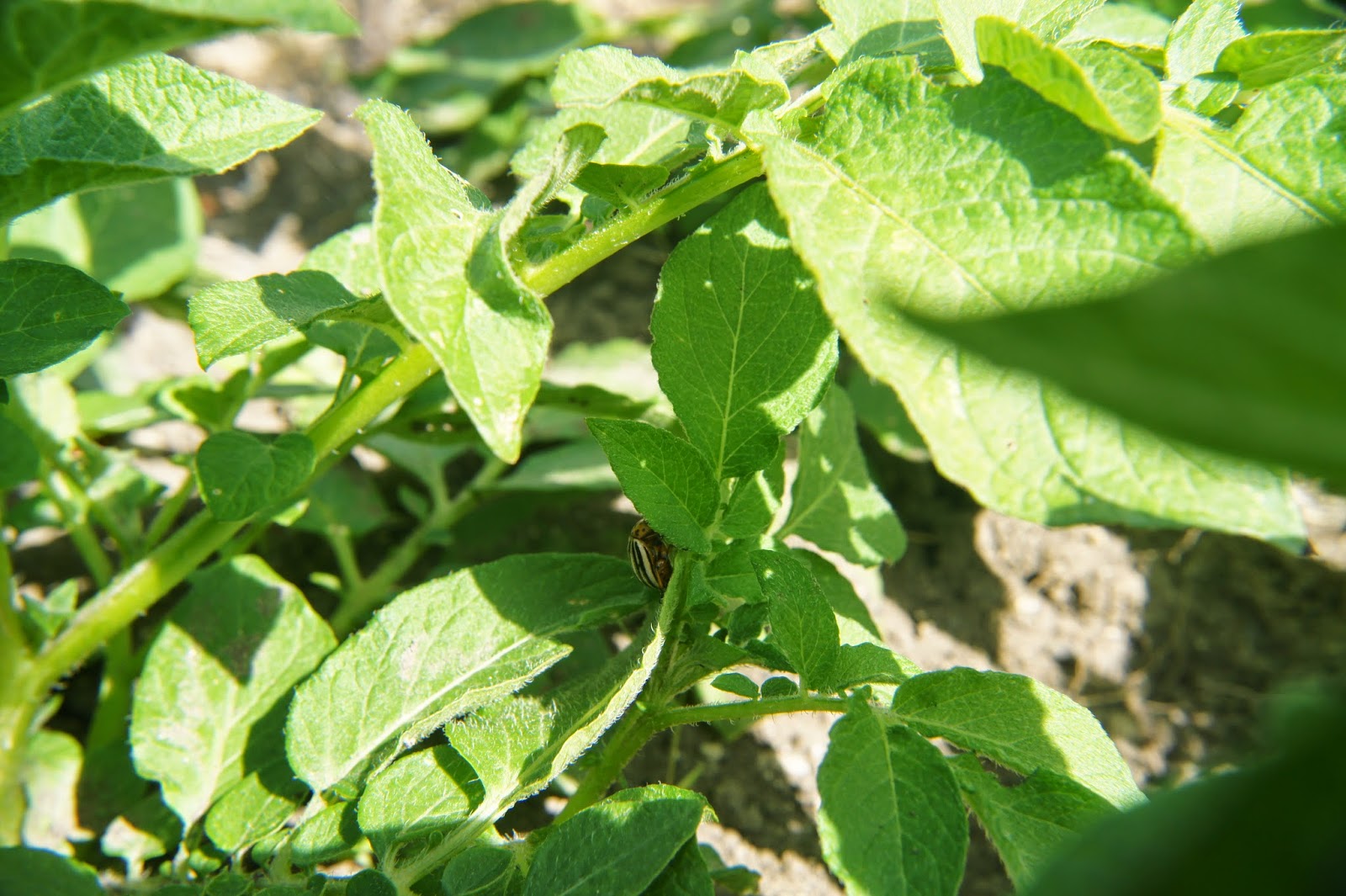 And another one! And they are laying their nasty orange eggs everywhere, too. Soon there will be disgusting squishy bloated larvae all over the place. The bottle of stuff I bought last year doesn't seem to be doing anything against them, so so far they've been ending up looking like this, one by one: 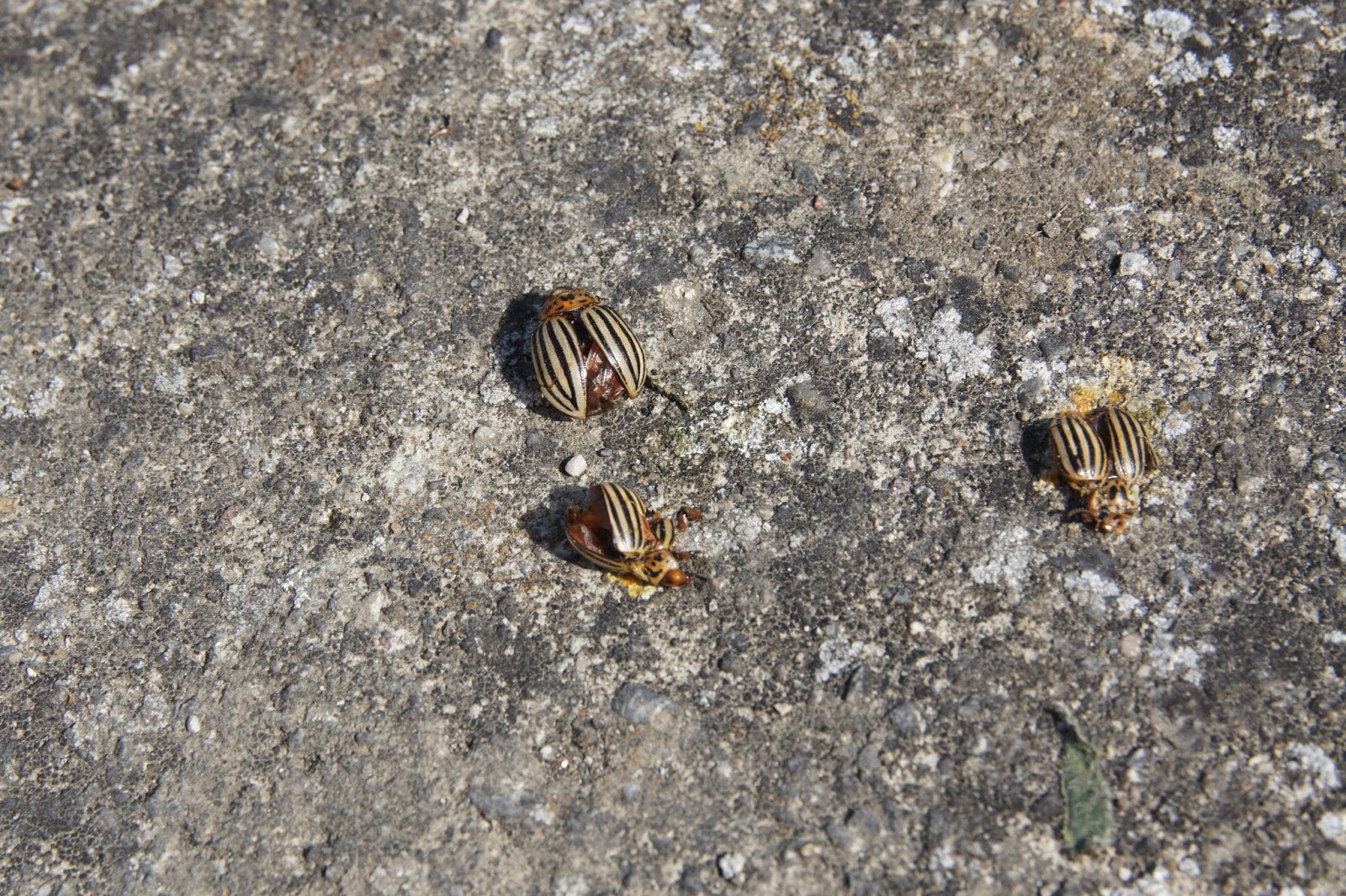 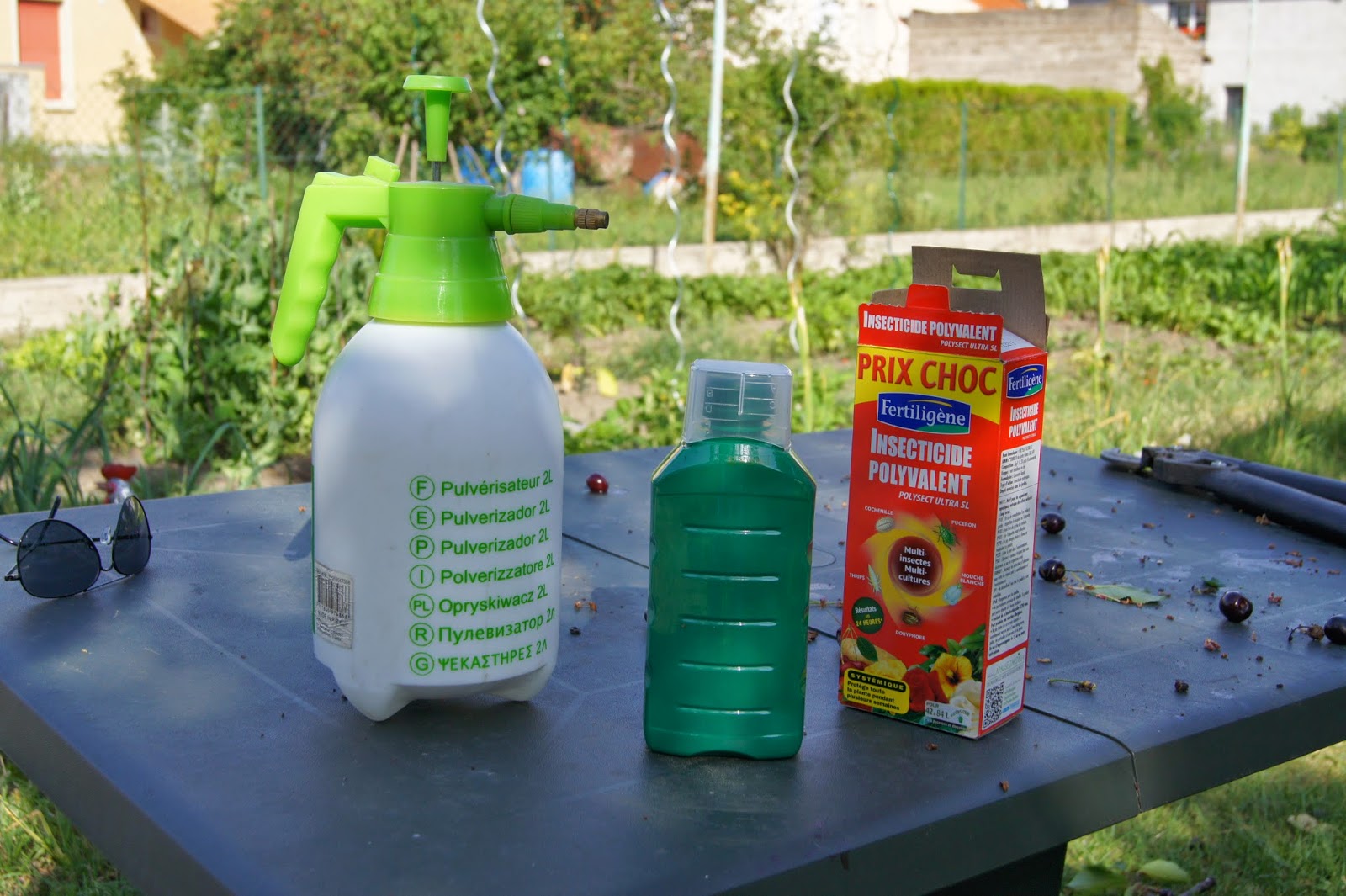 And soon after the bugs were looking more like this, waving their nasty little legs around in forlorn expressions of agony. 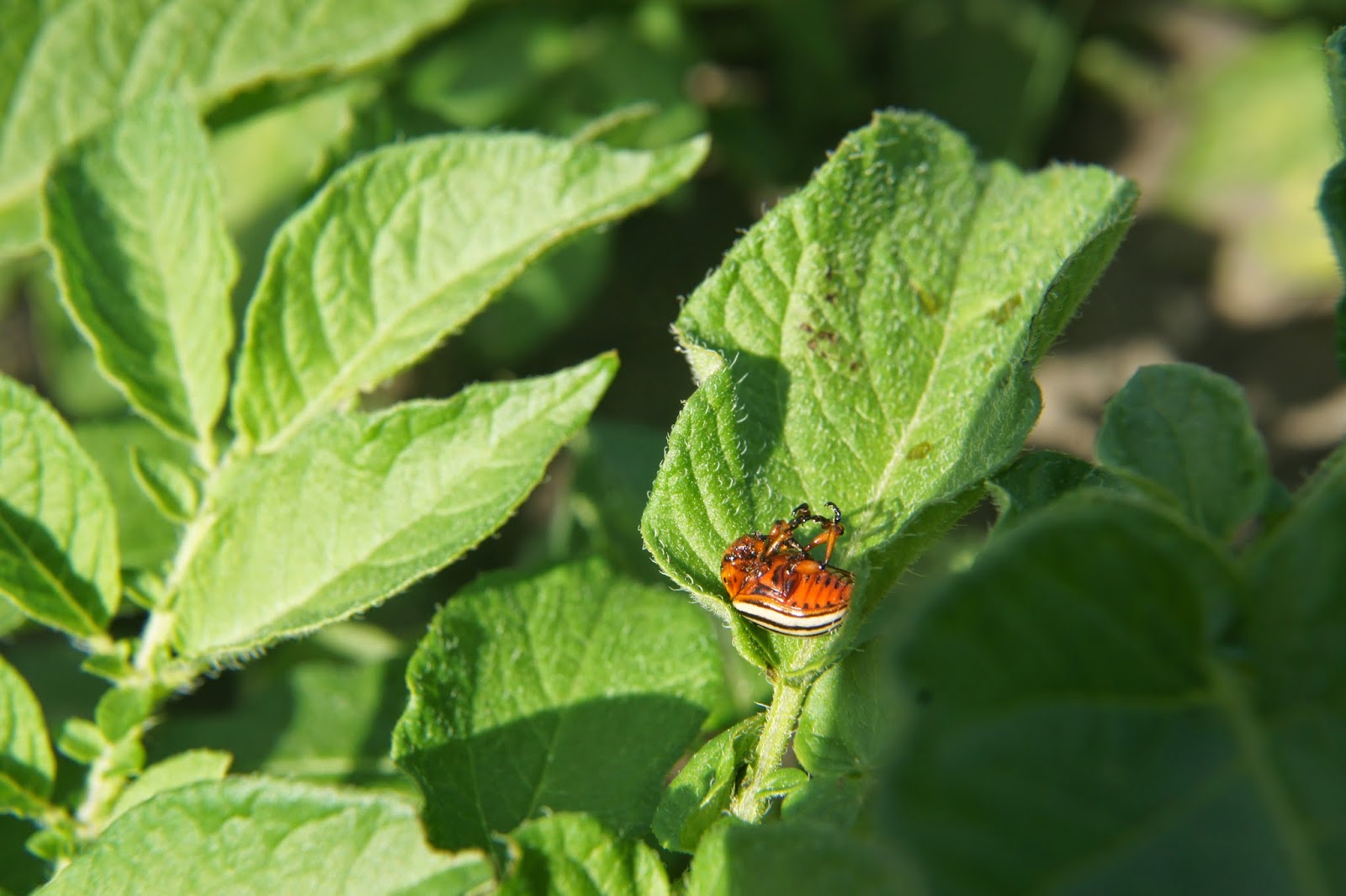 Thus far it seems to be working, and there have been no new infestations, and no sign of hatchlings. That is some powerful stuff! I think I will definitely heed the warning not to eat the treated spuds for at least two weeks. I did harvest some just before spraying, and they were delicious. So much for a chemical-free garden, but if it's that, or no garden at all, well, I made my choice.
Posted by NanU at 5:36 PM No comments:

Making itself at home

What is that there, behind the peony? I have a sense that there's something lurking in the garden these days, and it's not just the doryphores attacking the potatos. 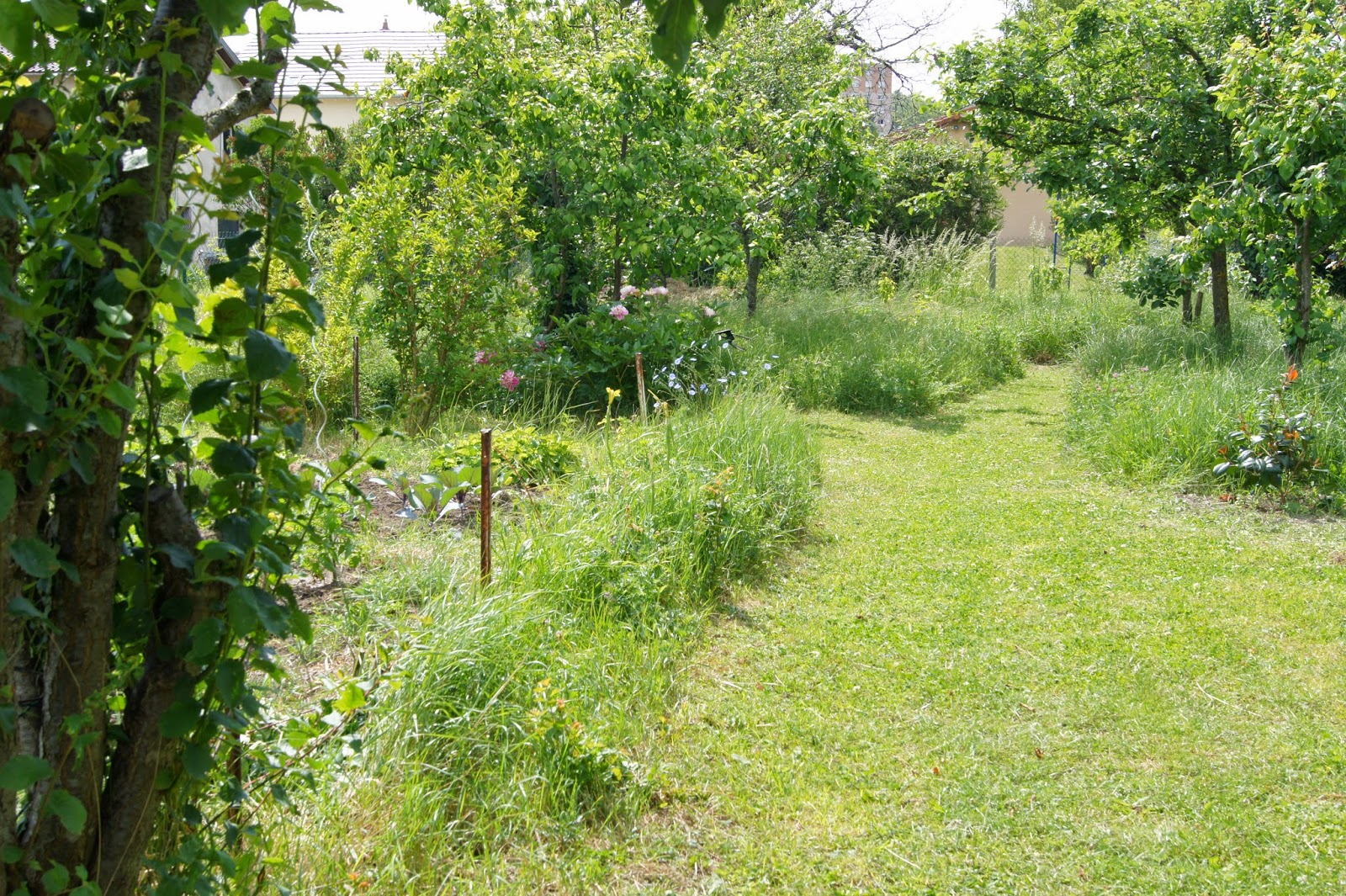 It's the monster from Avignon! 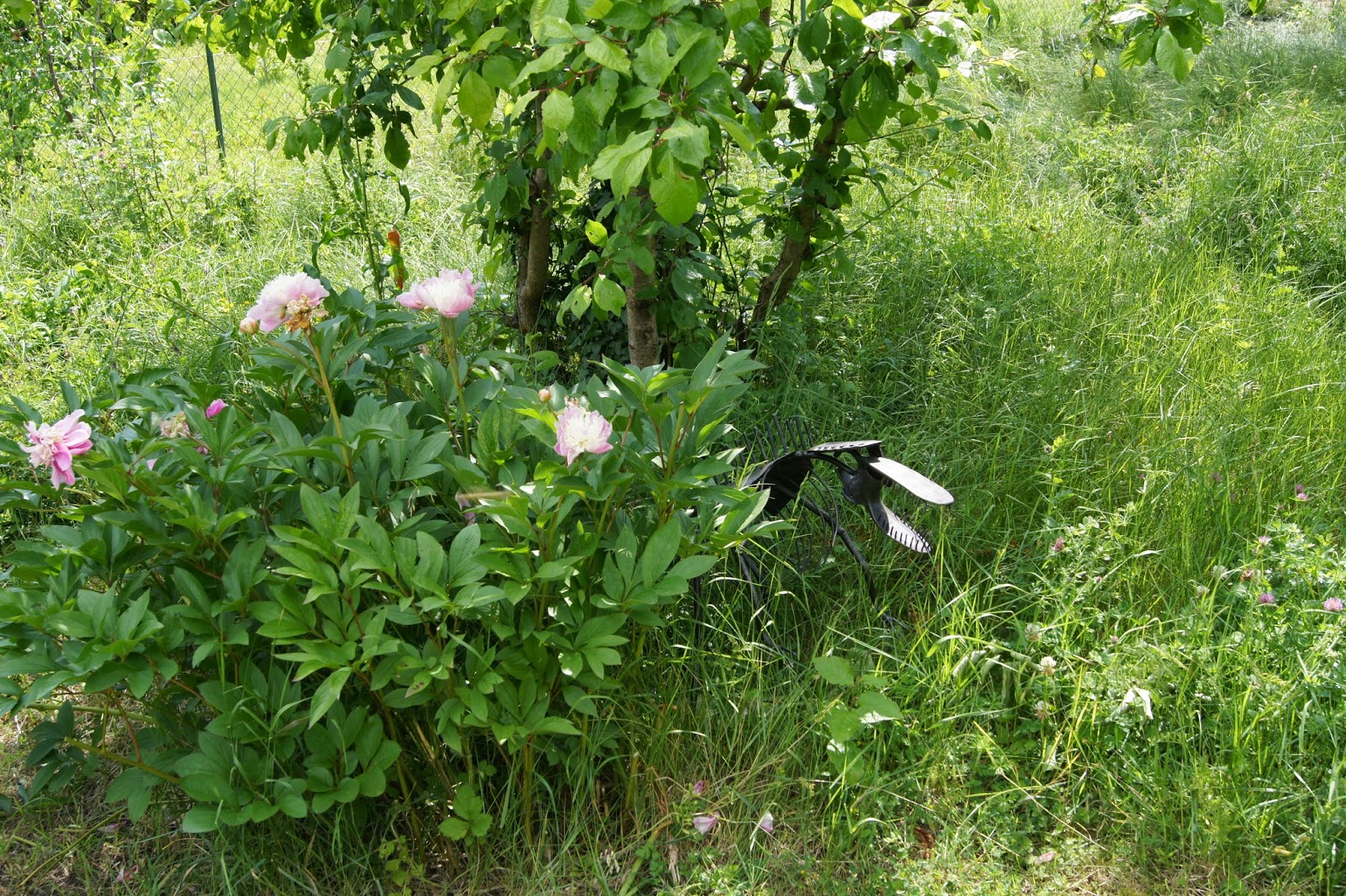 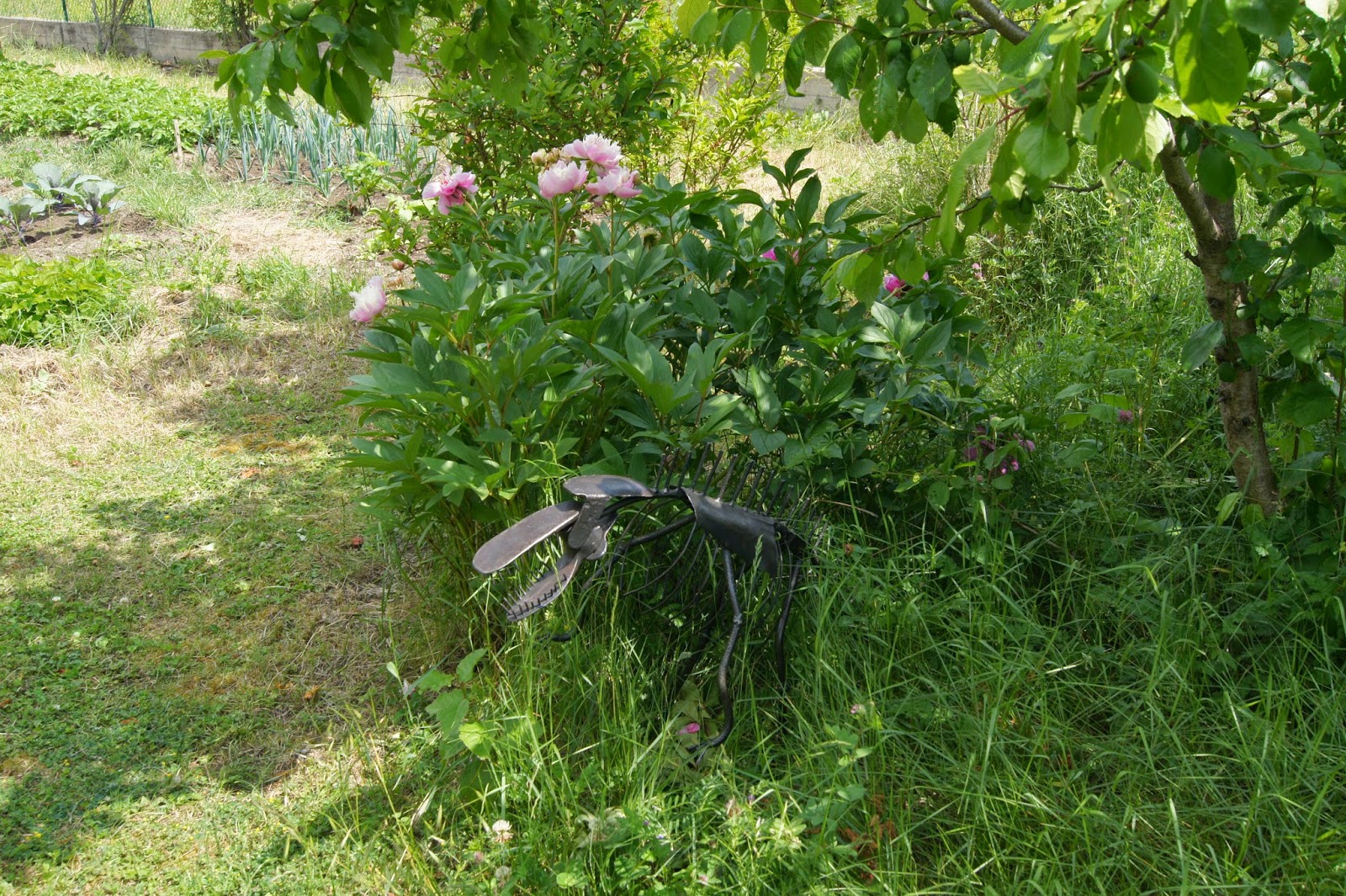