Getting to the point

The last time I was in Avignon, I was with two friends on a whirlwind tour of bits of France & Italy. We drove down from Clermont, stopped in Avignon just long enough to have a cold beverage on the square in front of the Papal palace, then hurried on down to Arles to spend the night. The line to get into the Palace was way too long, and the price of entry way too high, so we didn't linger. Or maybe it was just Dean & I who had a cold one and a wander around while Dan the popophile went in. That must be it. I vaguely recall tales of fabulous brocade.
On that trip I did want to stop and see the Pont de Gard, a rather famous bridge from the Roman era, if it was at all anywhere near our route. Alas, after sighting a couple of signs for it, we lost the trace and gave up. You can't see everything.
Tightwads that we were at the time, it's just as well we didn't find it, because entry to the site is a whopping 18€. Reasonable for a carload if you're going to spend the day seeing not just the bridge but the museum and have a wander and a picnic in the lovely and extensive park, but not for a couple of quick snaps and we're off to the next thing on the checklist.
Ten years later I'm back, and for a good look. 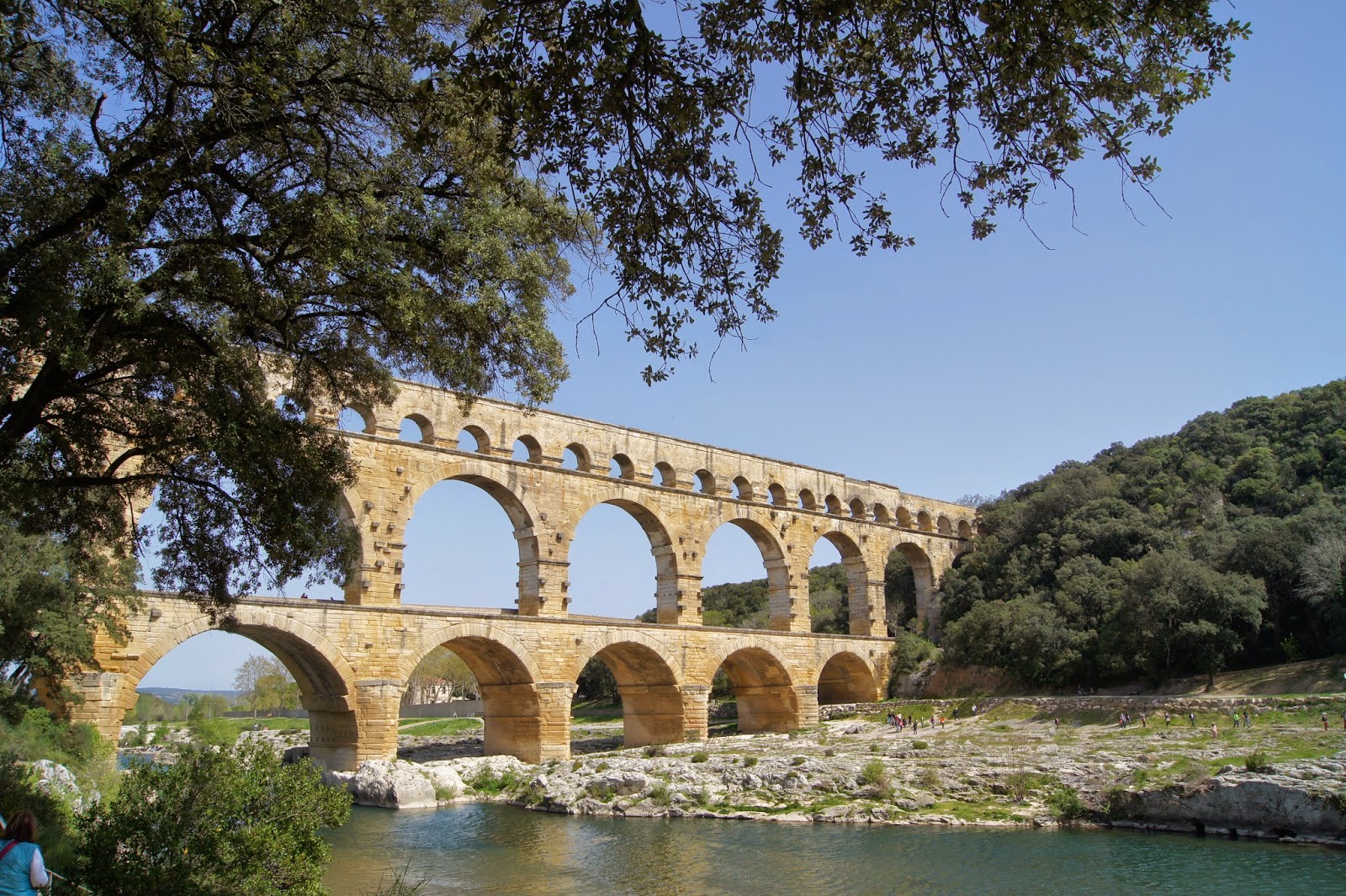 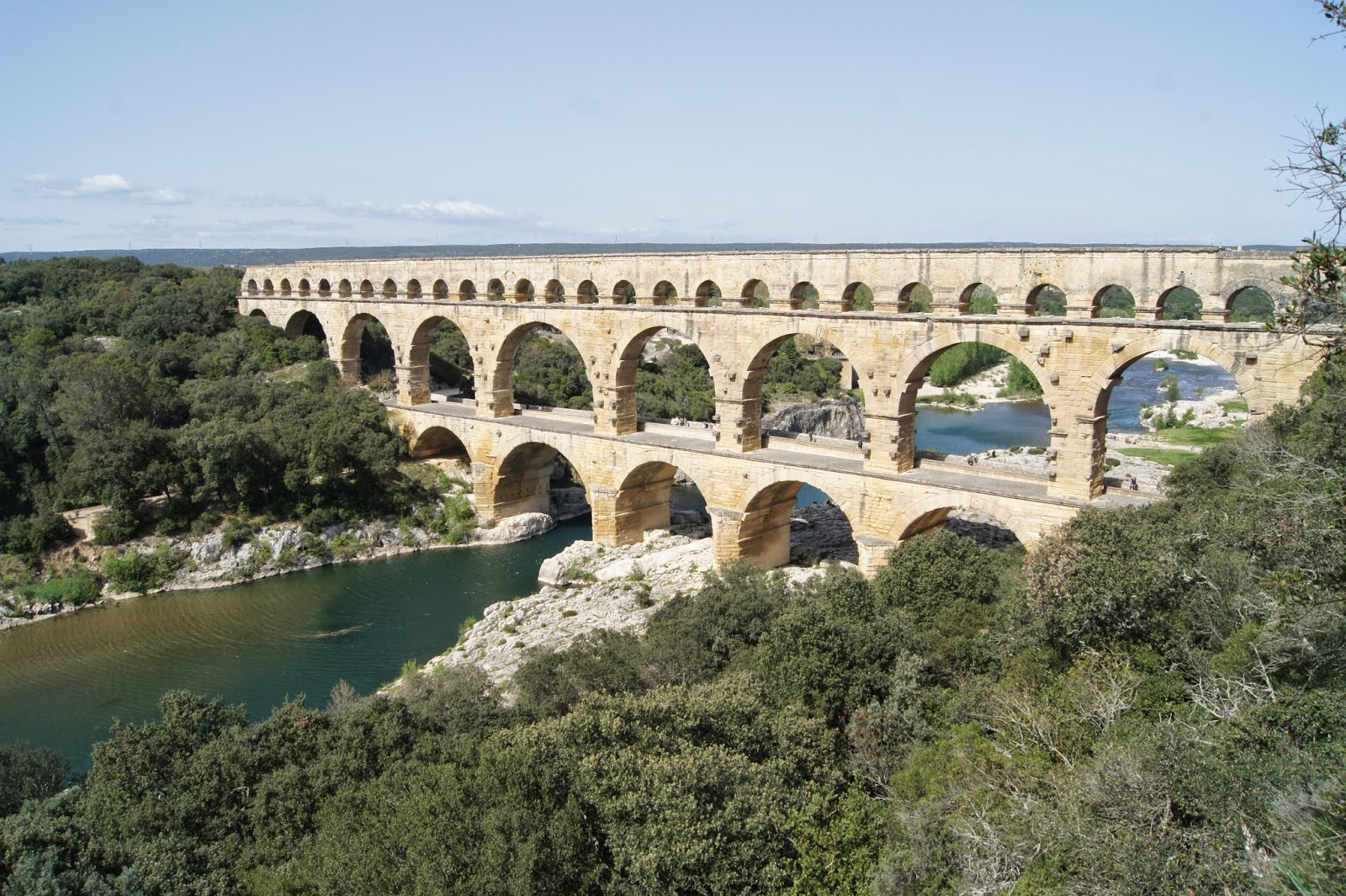 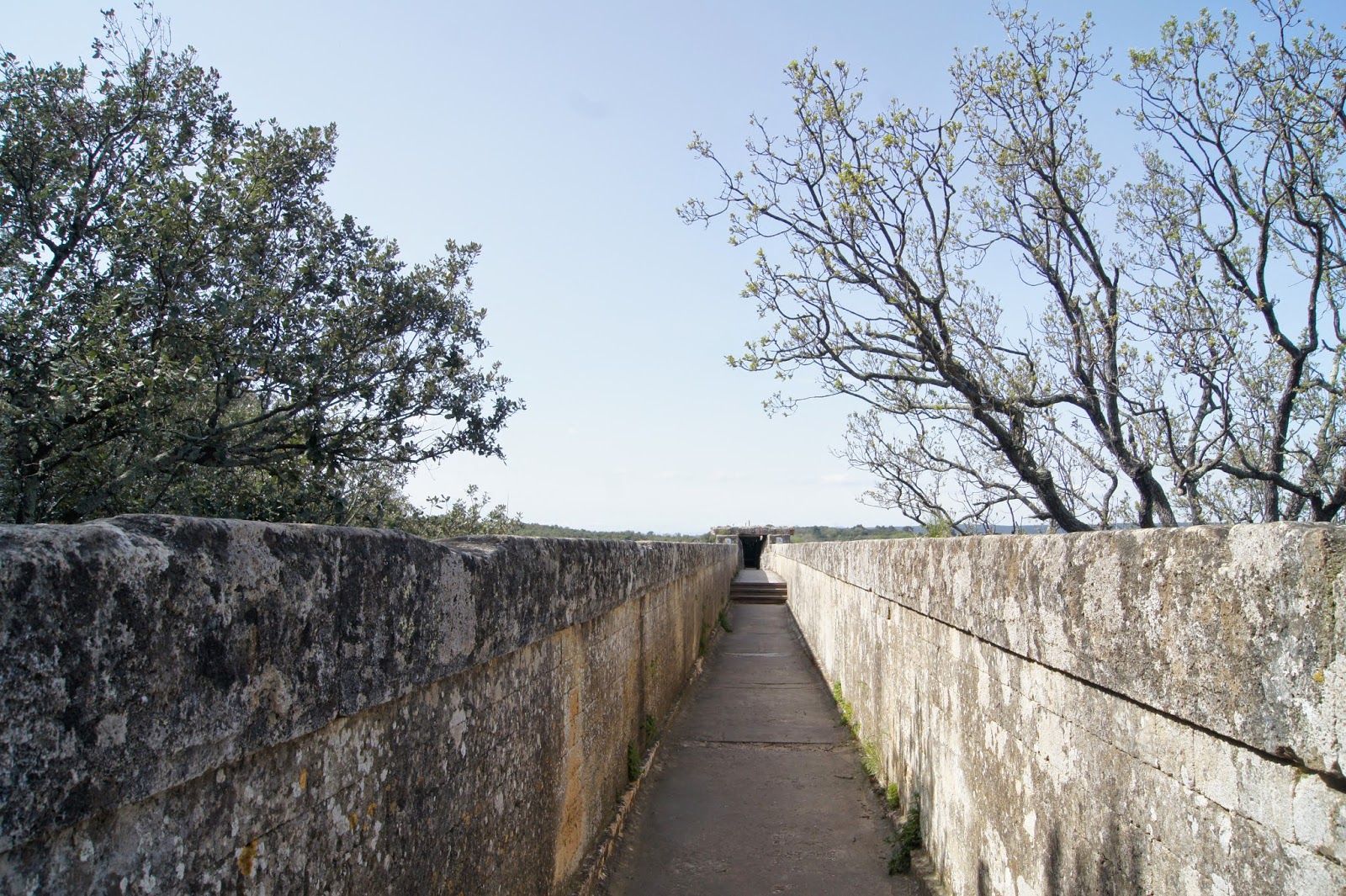 The top level was an aqueduct, taking water to irrigate crops all over the region. 2000 years ago, those Italians sure knew what they were doing! The lower level was for pedestrians and other traffic, and you could still cross the old pont itself until just recently. Now, however, the monument is closed off, and a discrete bridge parallel to it allows visitors to reach the other side of the river. 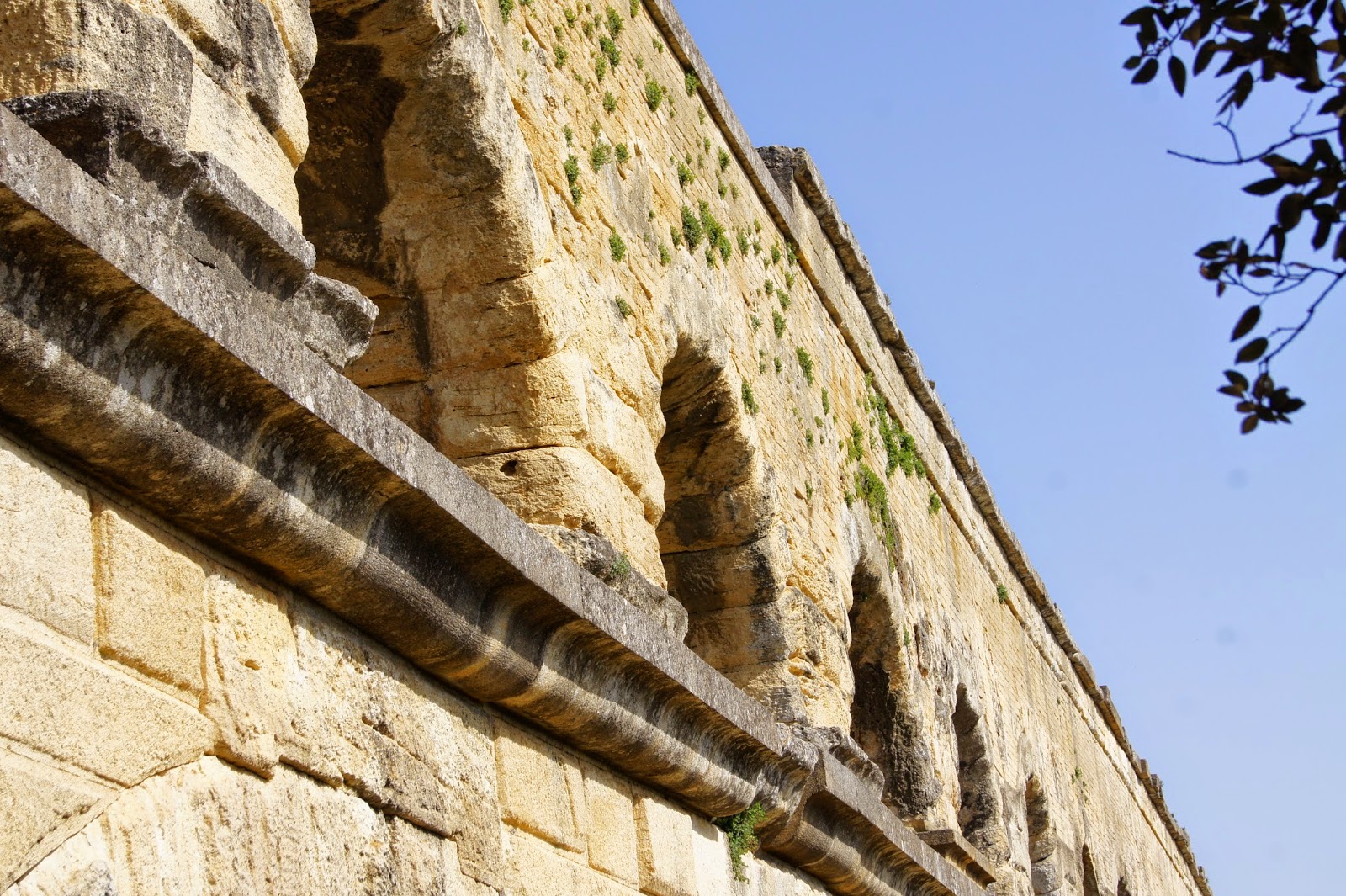 After admiring the Pont, we wandered about the countryside, stopping in some of the more picturesque villages. This is Cote de Rhone wine country, and most of the rocky land is planted in grapes. In the summer these wonderfully preserved villages are nightmares of tourists with their busses and cars and whining children, but now at the beginning of April, with the vines barely beginning to leaf out, it's quite calm and pleasant. 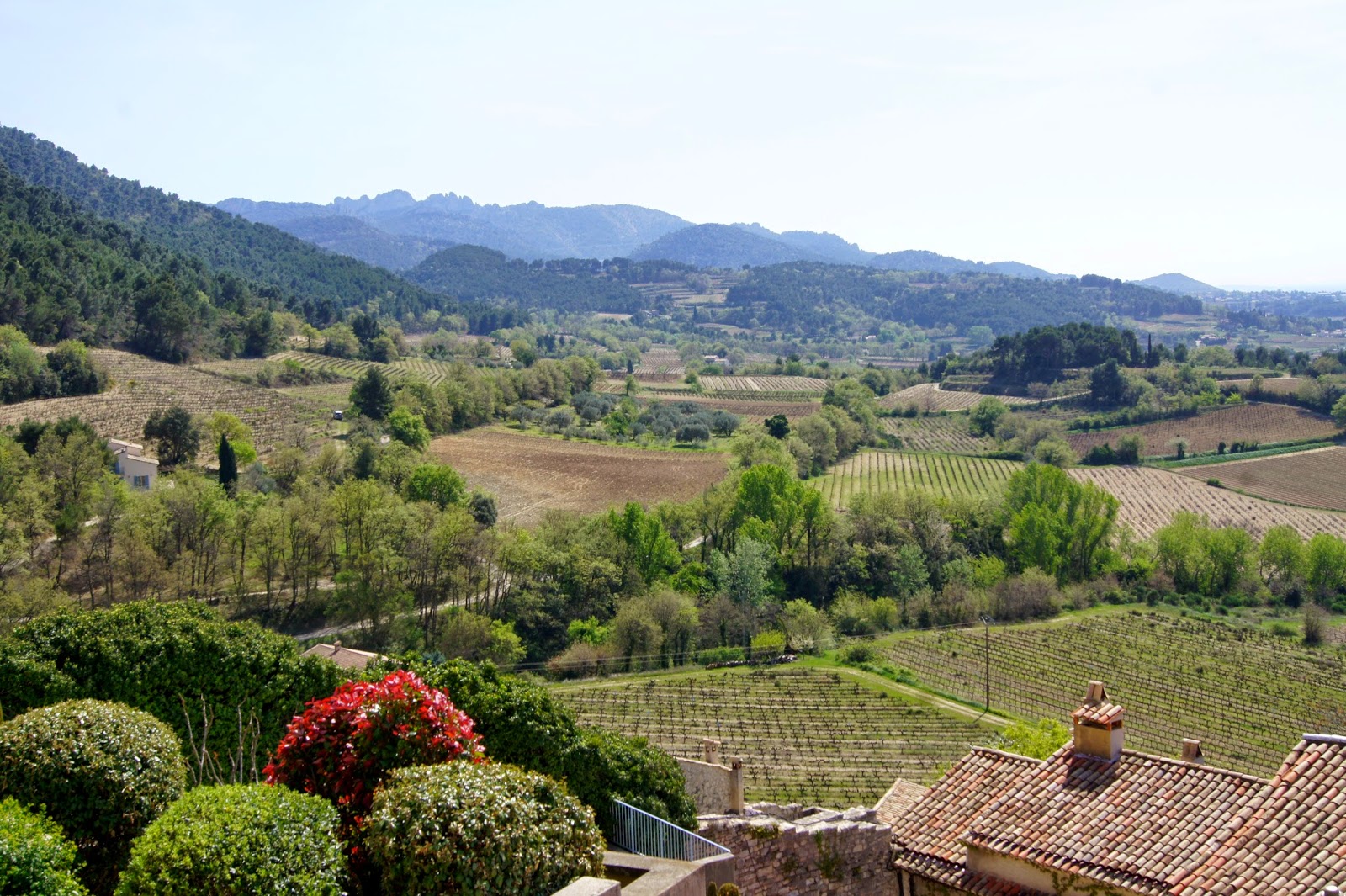 More of the south 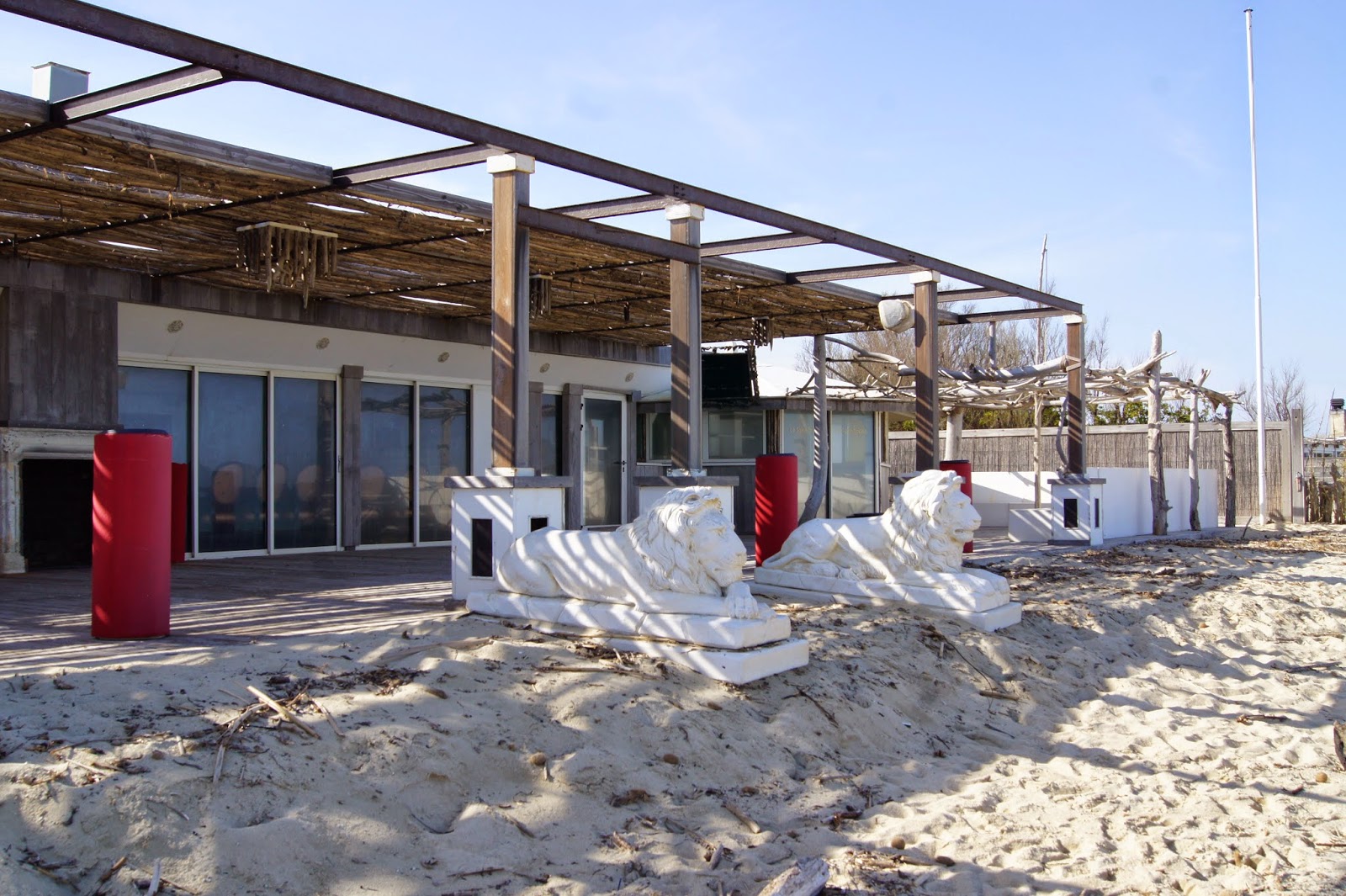 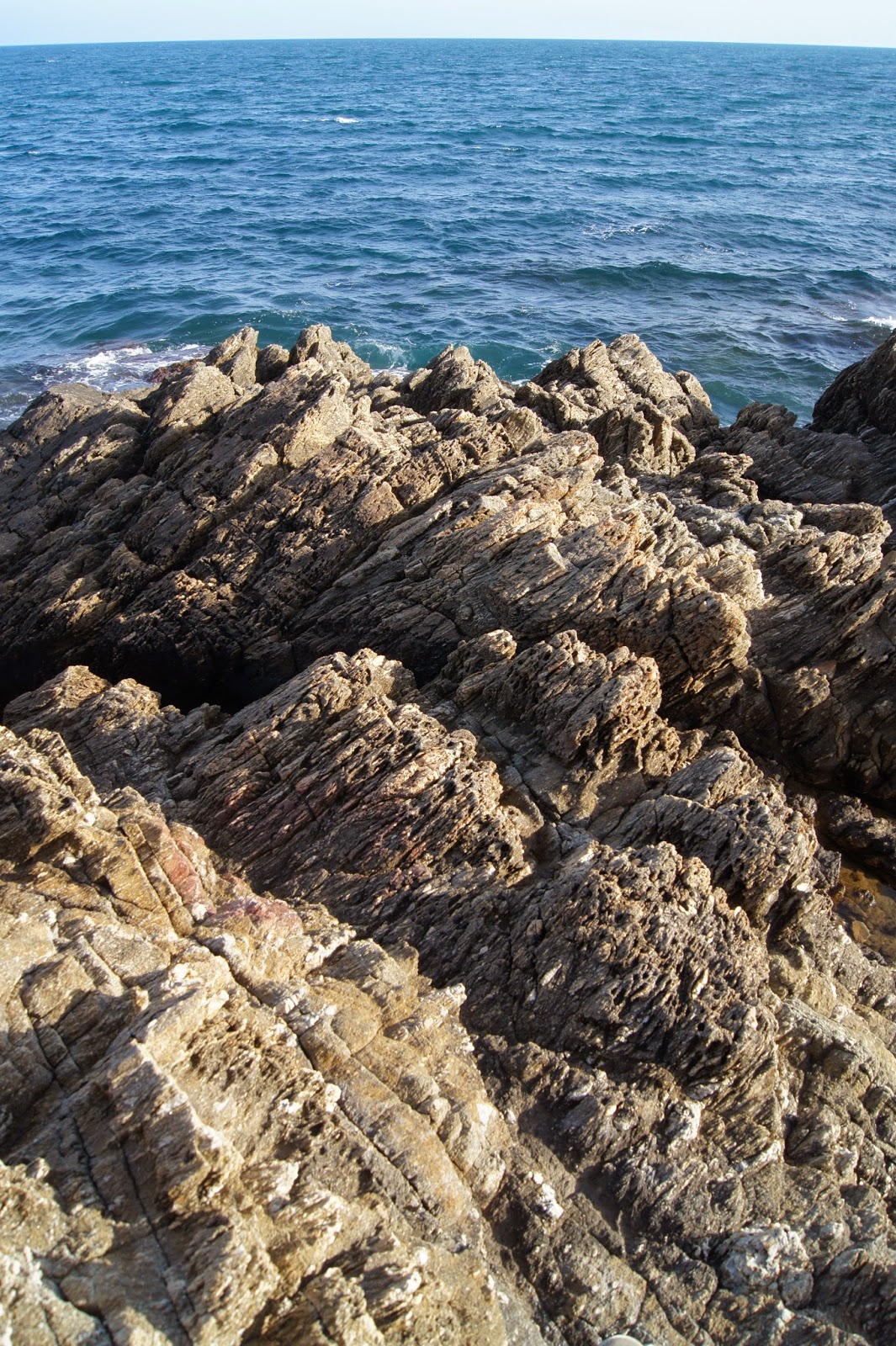 There are a lot of little sandy beaches along the coast, but there's a lot more of this kind of rocky edge. So the people are all crammed onto 10 metres of beach while right next door there's peace & quiet. 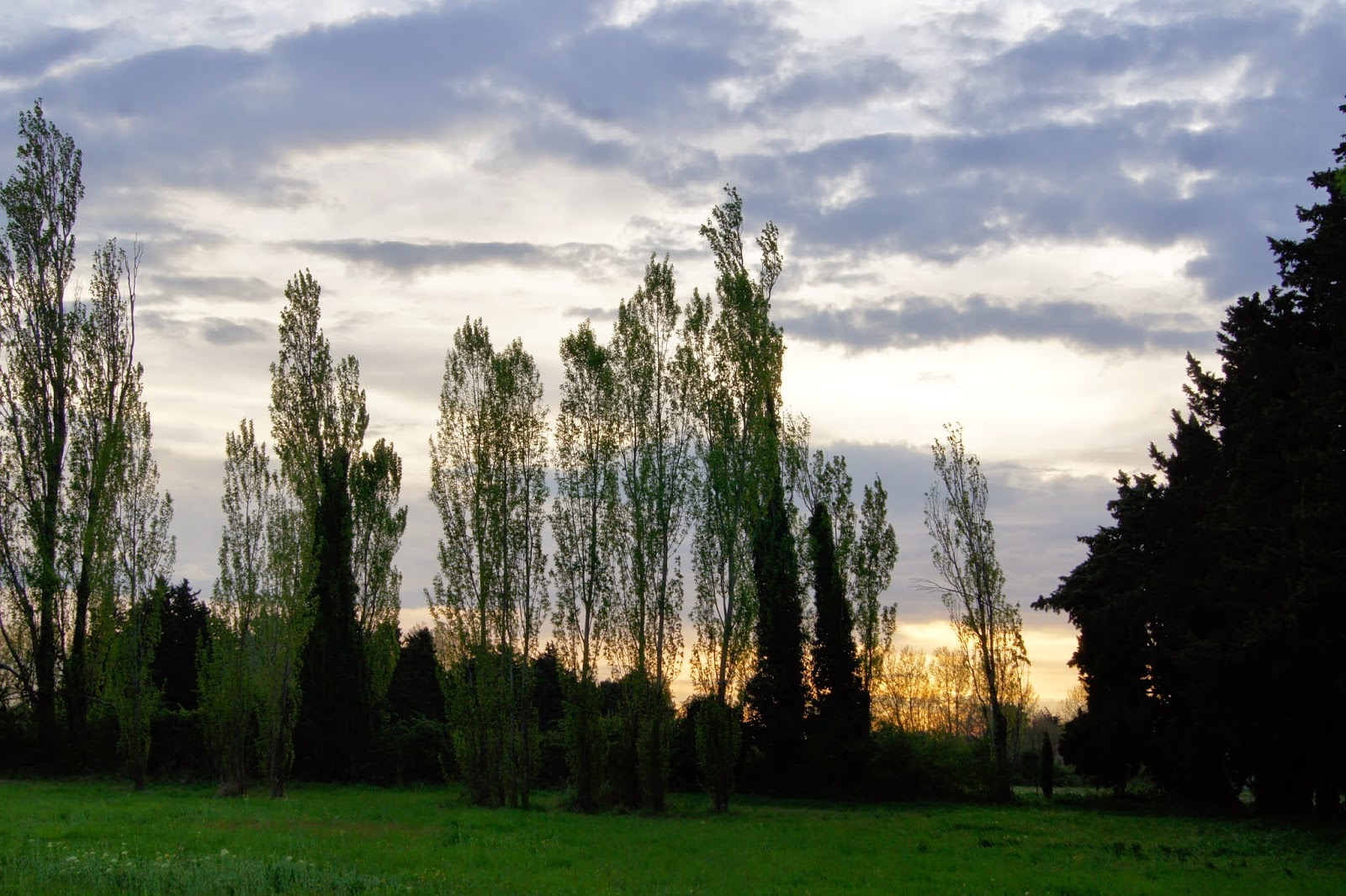 After a couple more days of bridge, we went back to the house at Sarrians to spend the weekend à deux. 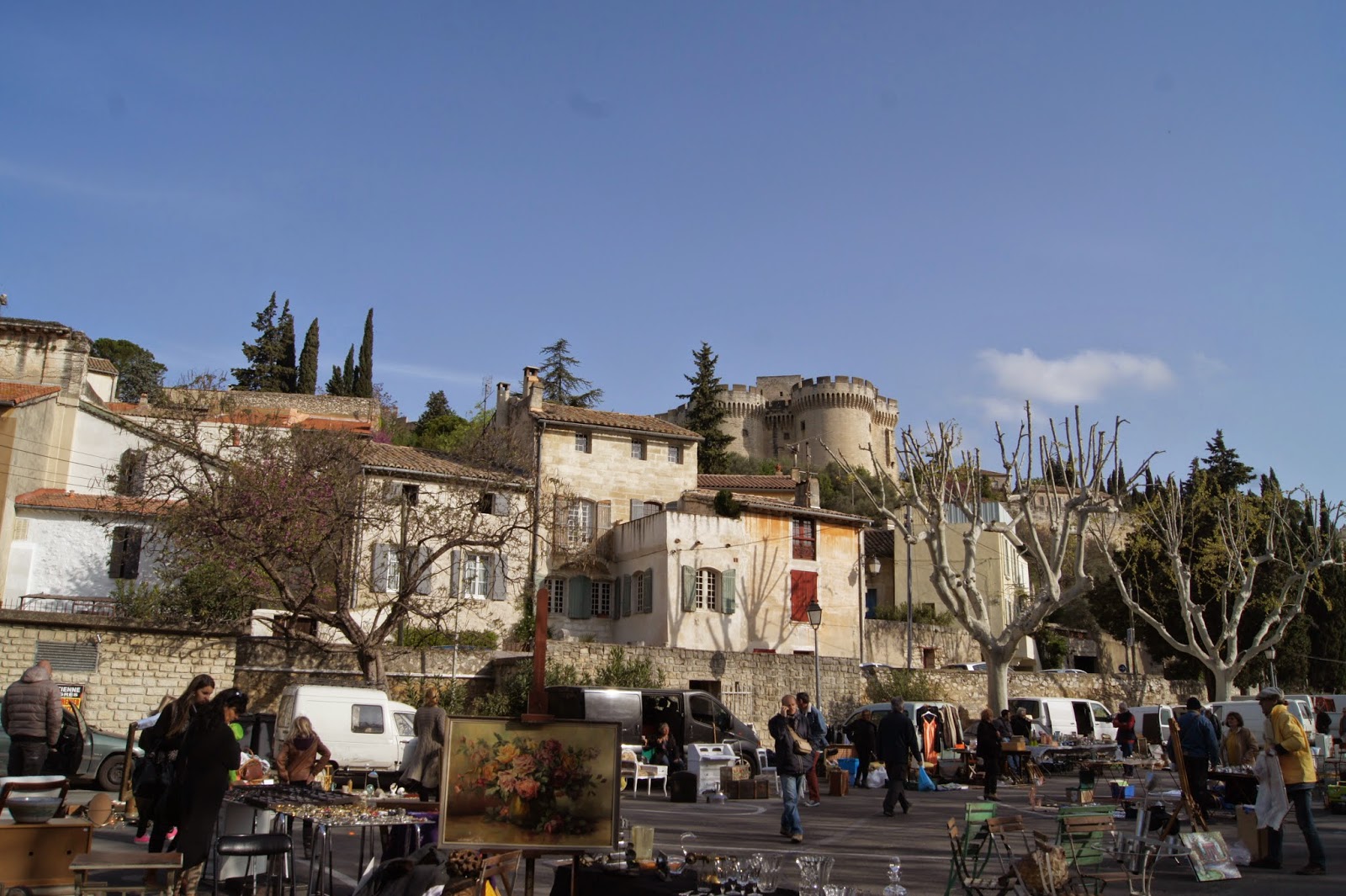 Saturday mornings in Avignon there's a flea market (really a low-end dealer's fair - there are no garage-sale-type stands here, only professionals selling to tourists). But I like that sort of treasure hunt anyway, and treasure I did find. 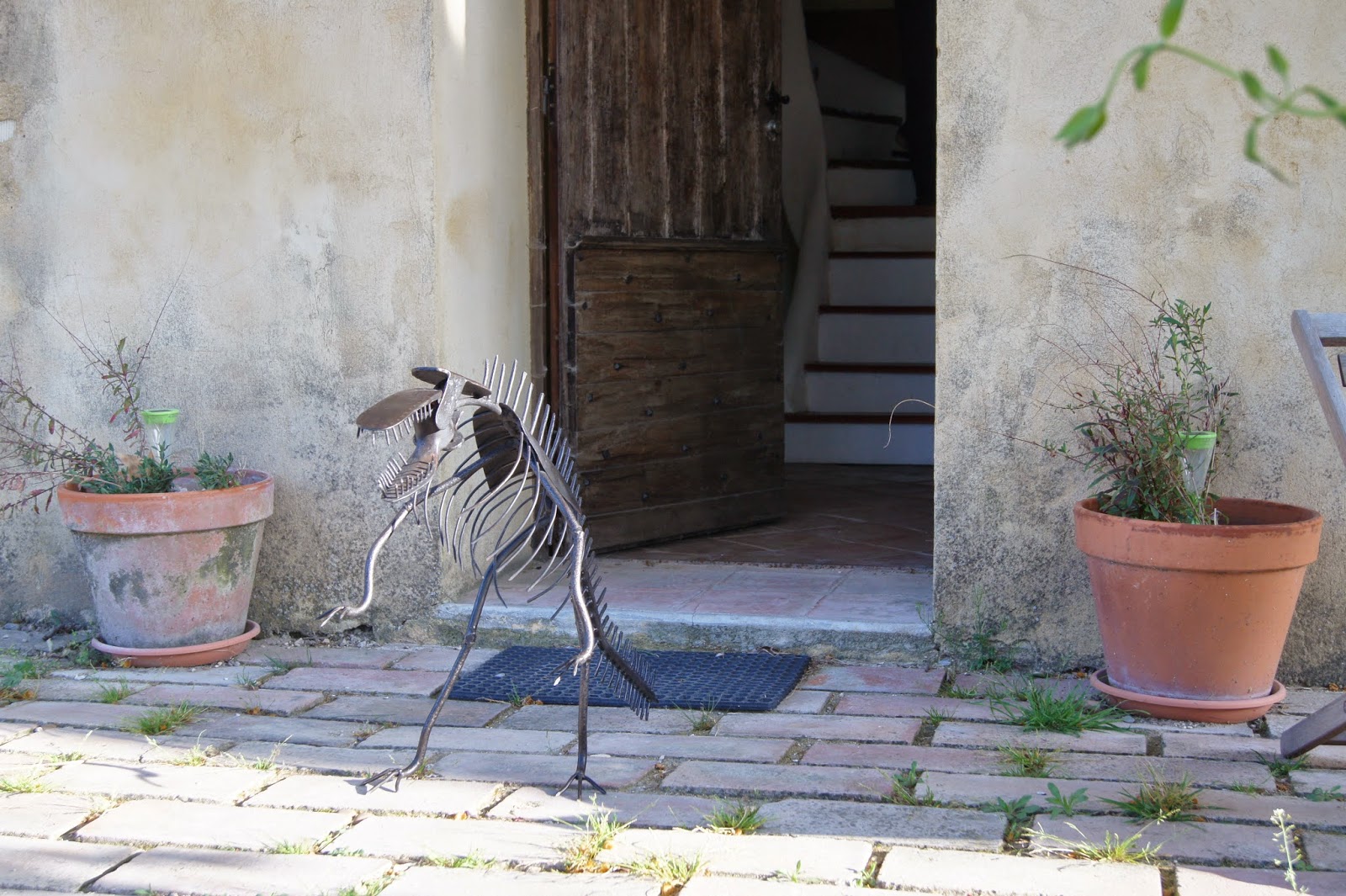 My very own dinosaur.

For the week, we stayed with JP's cousins Michel & Marie-Lou. They live near the town of Adrets de L'Esterel, in the hills between Frejus and Cannes. I didn't get in any walking at all, first because there are no real trails right near their house, and second because we were hardly ever there. Most of our time was spent on the coast, where we had bridge lessons in the morning, and a tournament every evening, meals included, with the afternoons free to wander around.
With 45 minutes travel each way, there was no point in returning to the cousins' for the midday break, so we just went around visiting some of JP's old haunts. He grew up around there, and knew St Tropez long before it became popular and filled with tourist restaurants & bad portraits of Bridget Bardot. 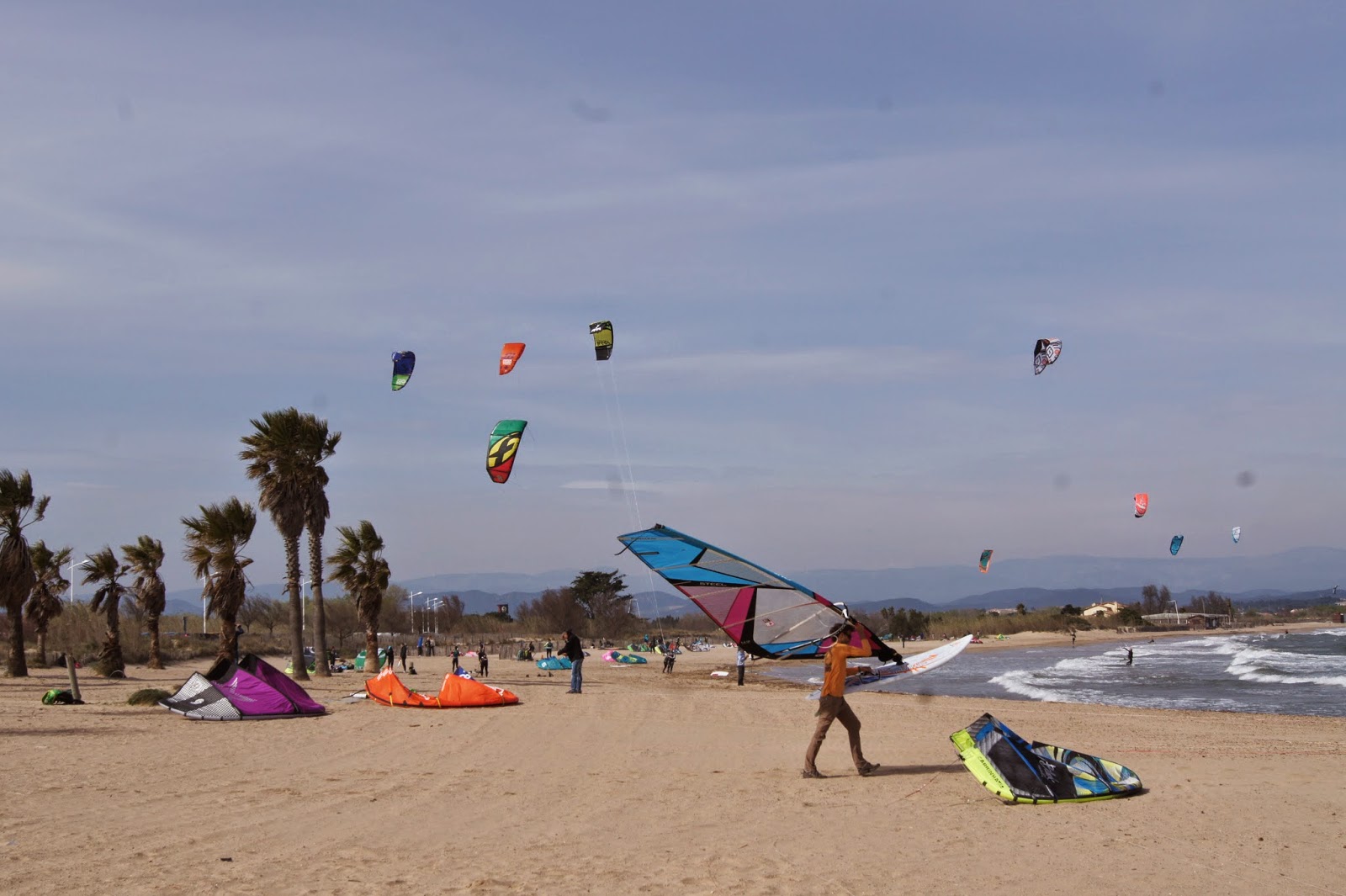 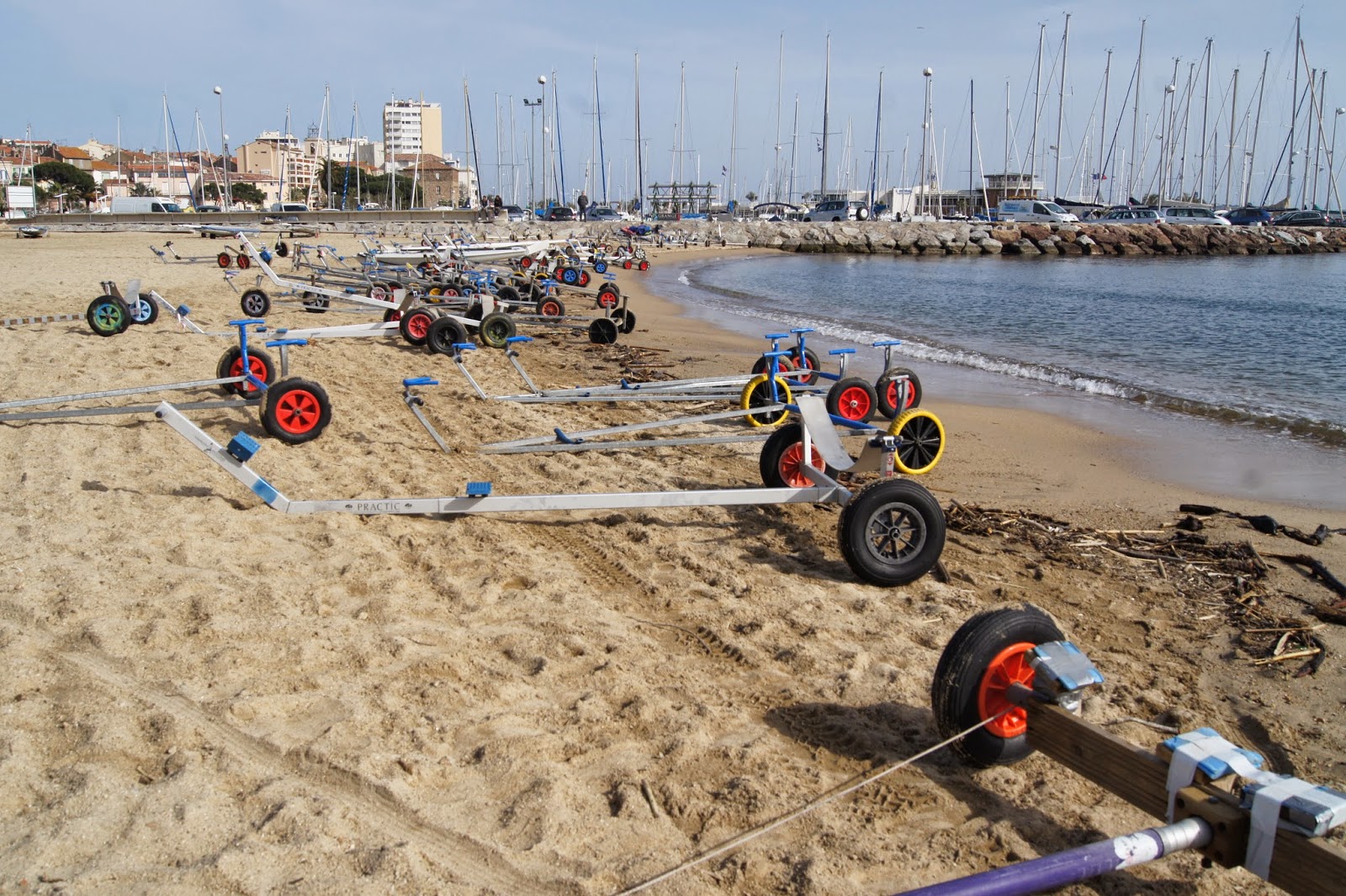 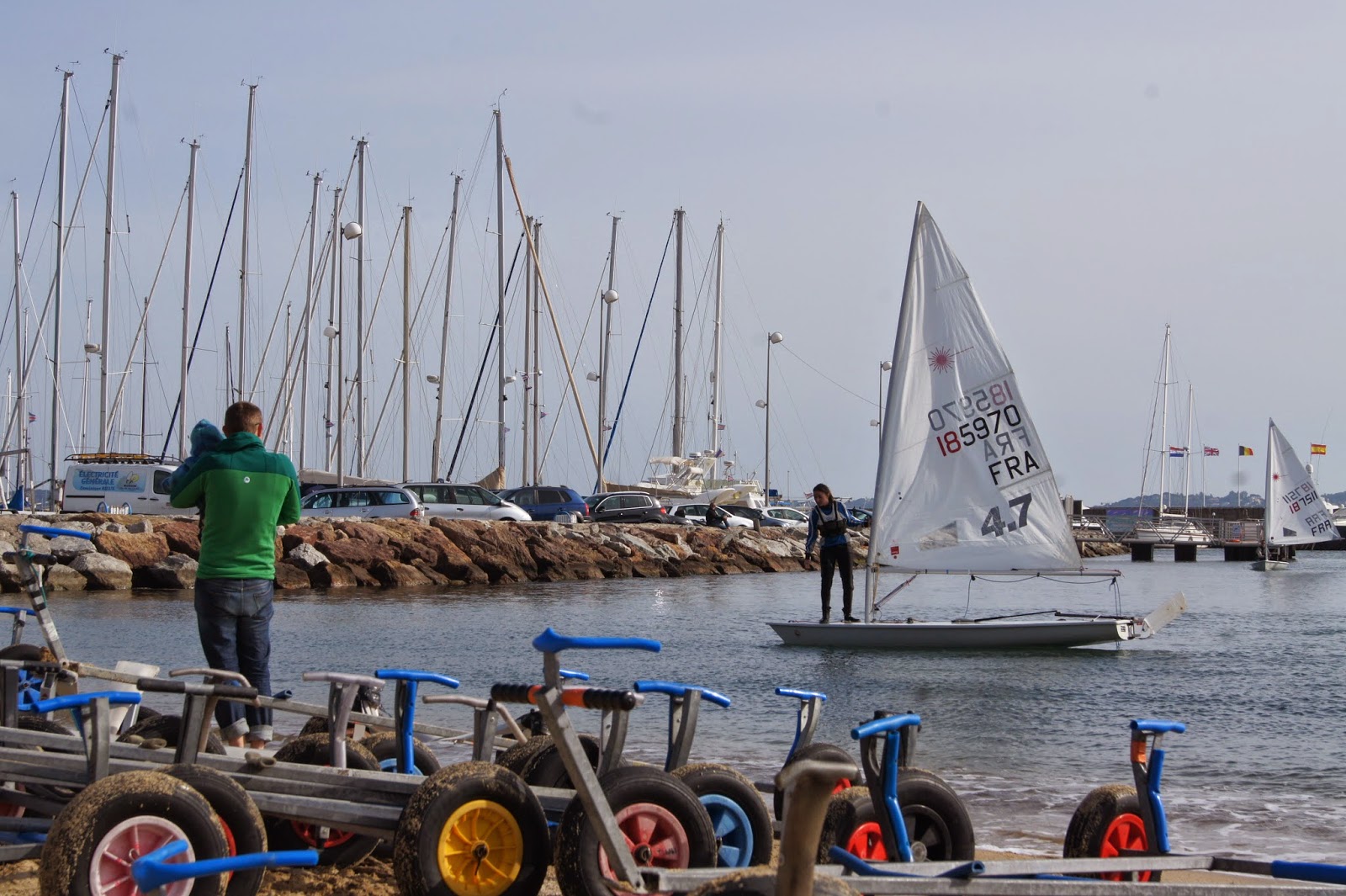 Mom coming ashore after the regatta. 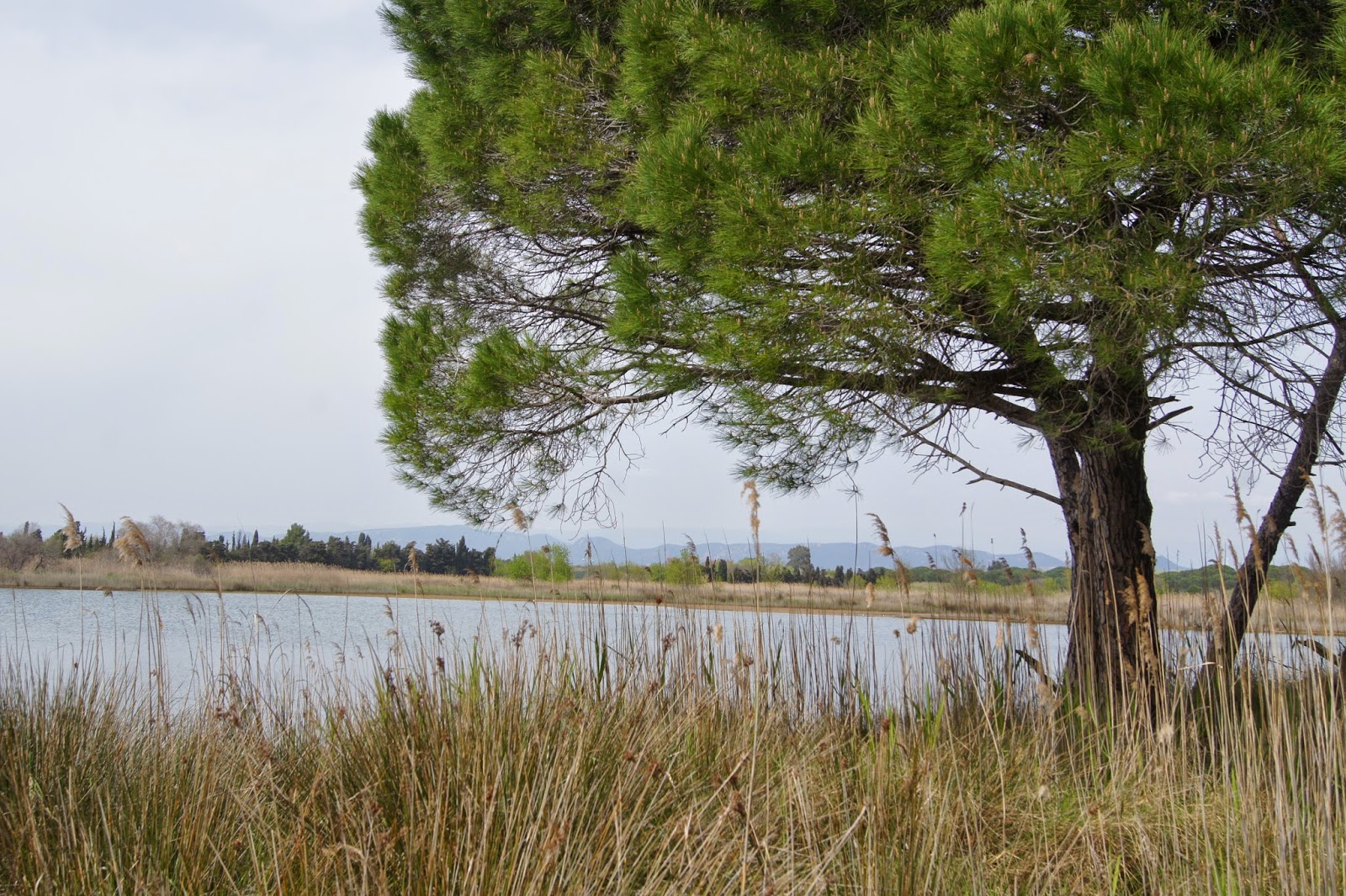 One of the rare open spaces along the Cote d'Azur. We saw three swans and a couple of coots. 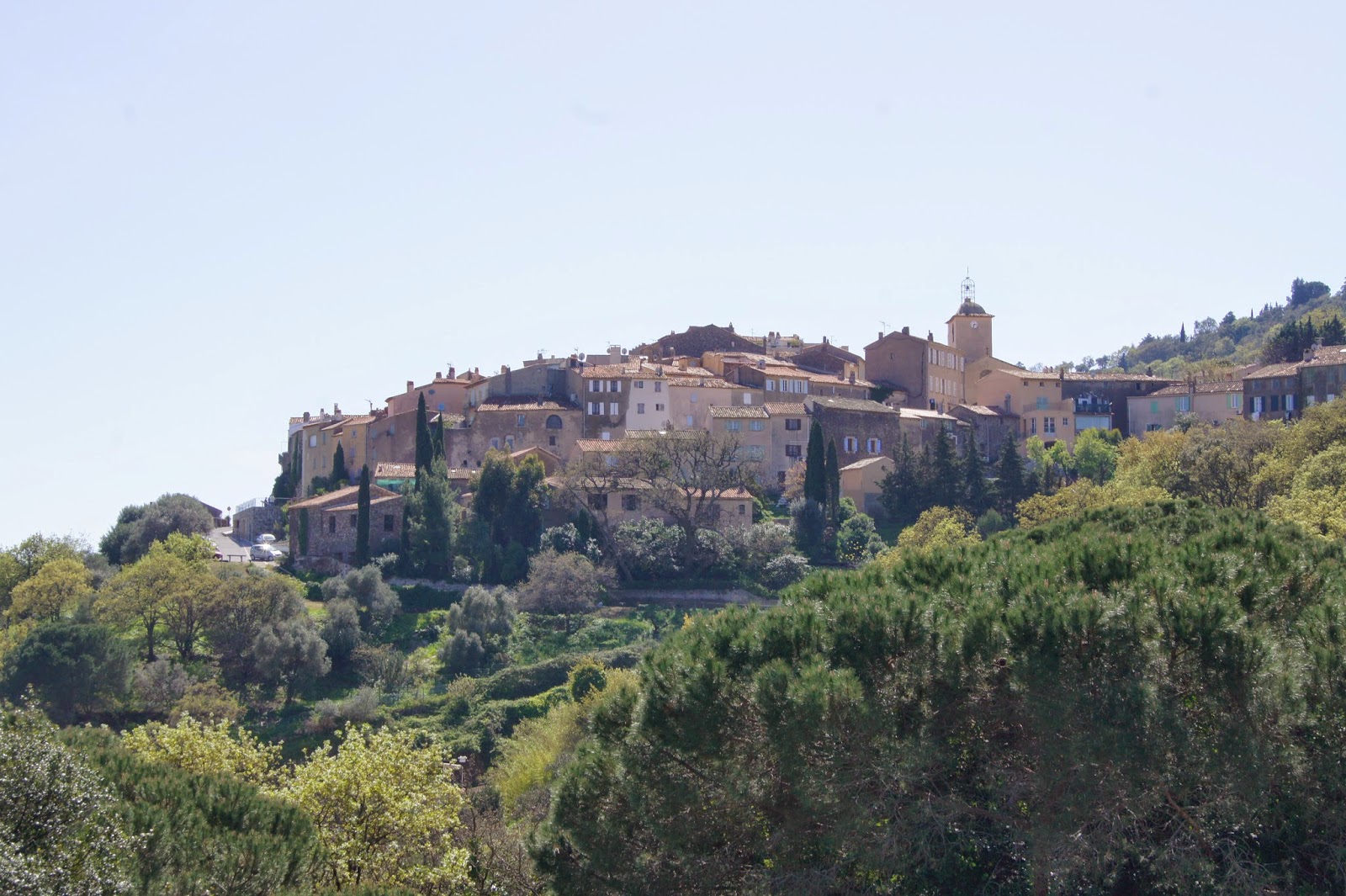 One of the many picturesque hilltop towns in the interior. 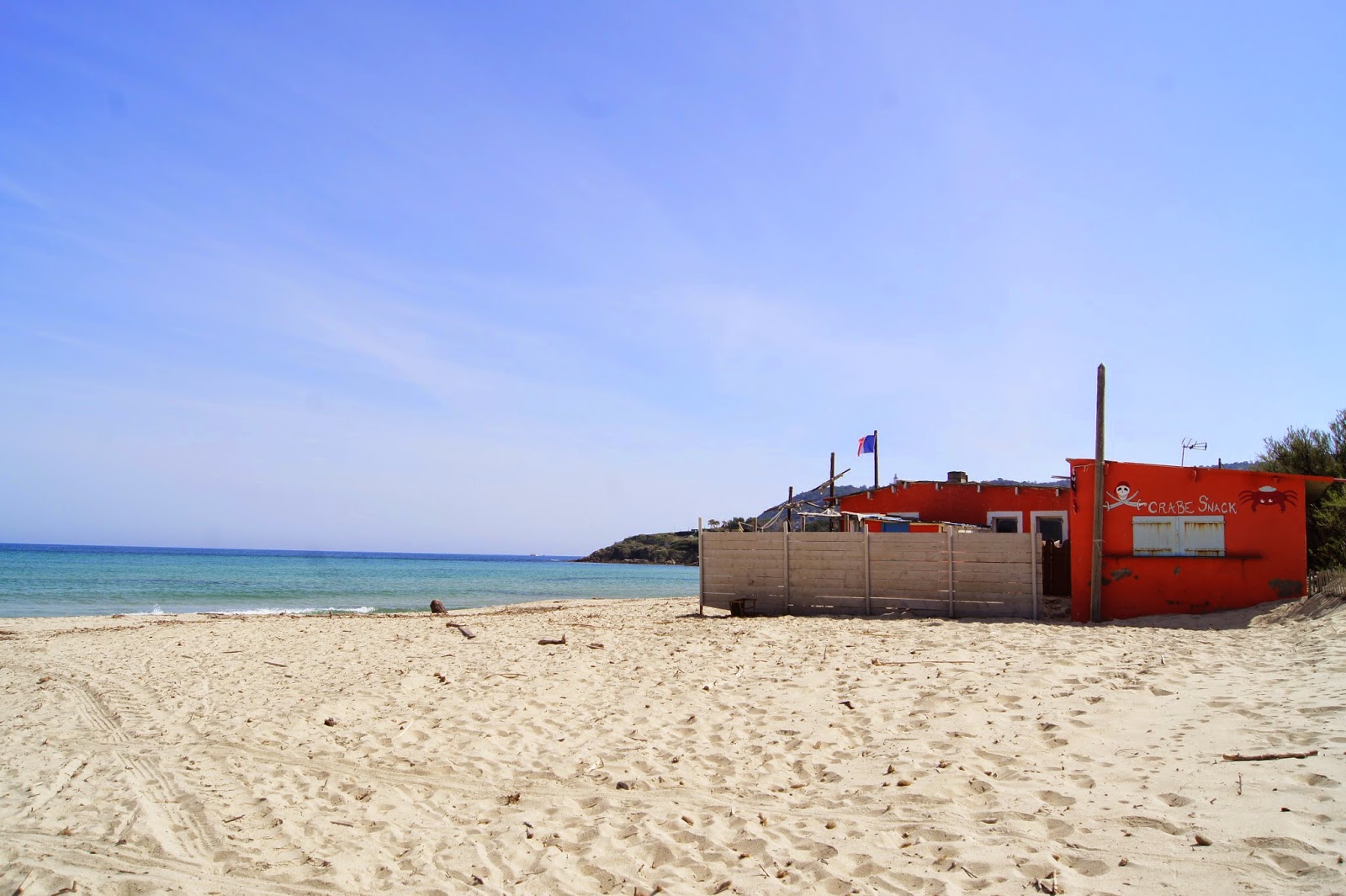 The beach not far from St Tropez, before being mobbed by thousands of tourists. We walked in the sand for a while, and I stepped on a bee. It's been years since I've been stung. It wasn't too bad, but it did keep us from and serious walking around for the next couple of days.

Back to work! More later. 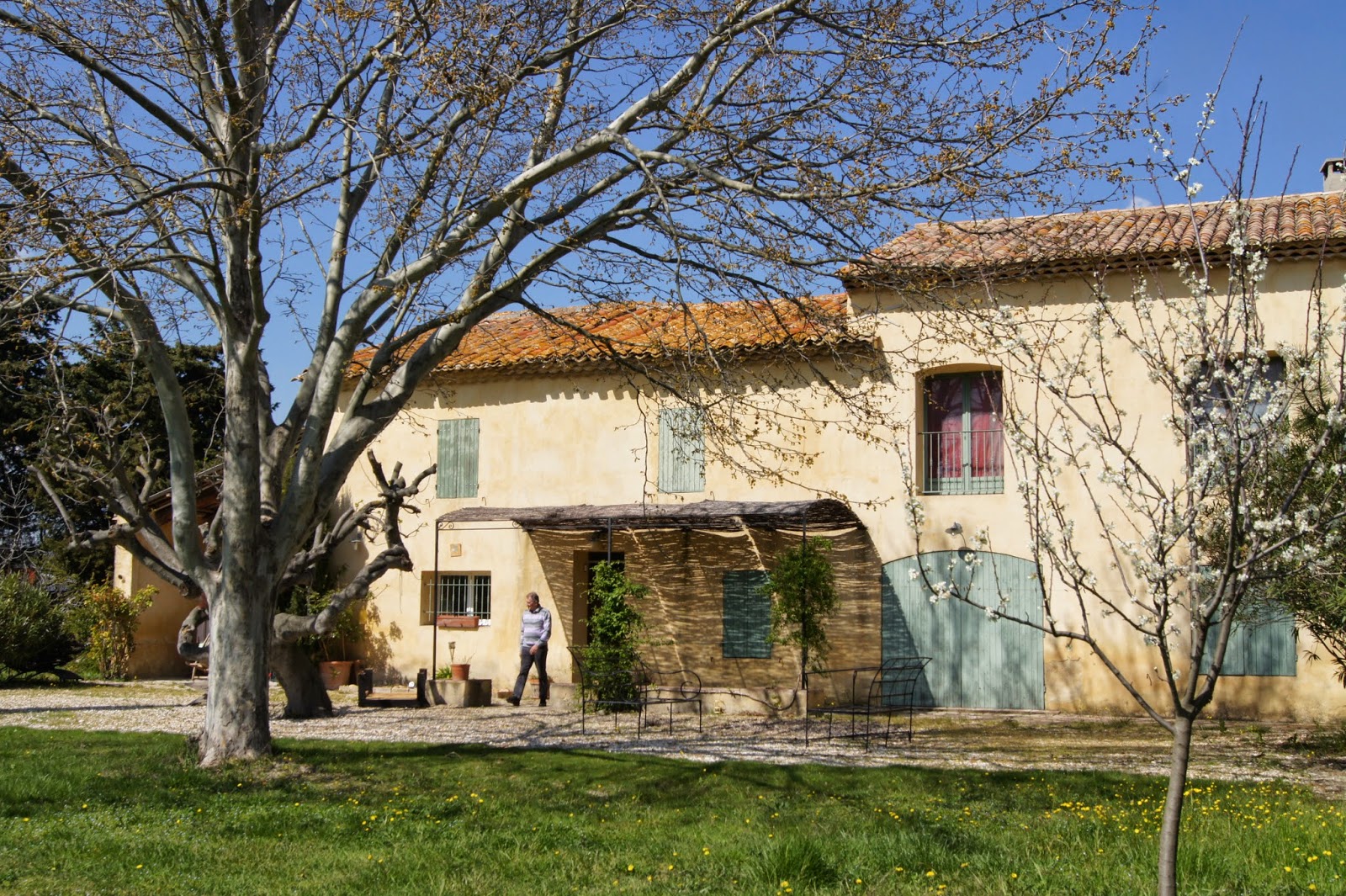 Well, I was on vacation last week so I figure I should share some of the snaps I took there. First stop on our way south was Jean-Philippe's son's house in Sarrians, near Avignon. 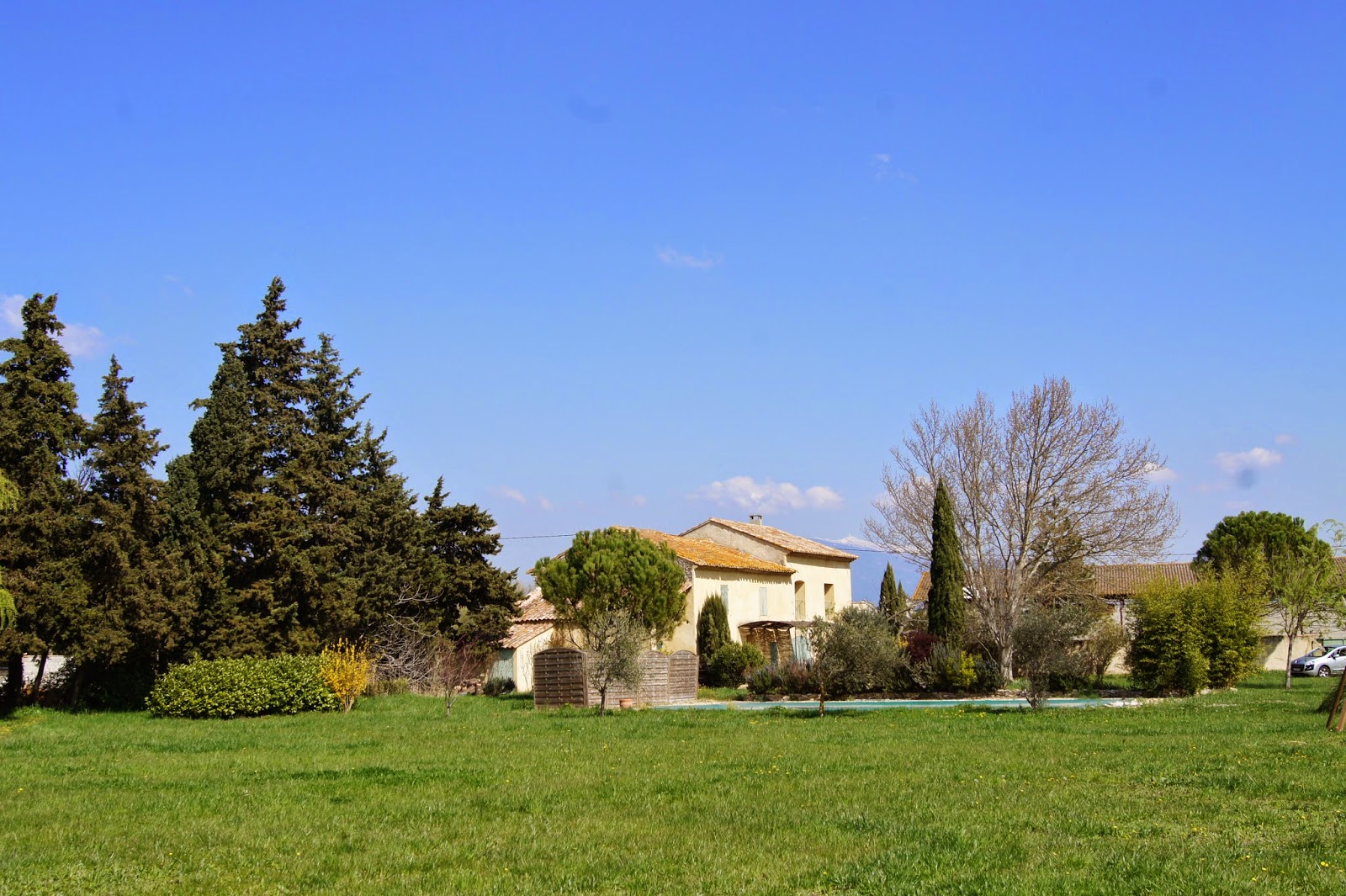 Nice place! Nice big yard, too, though with the Mistral ripping through I imagine it must be difficult to fully appreciate the pool 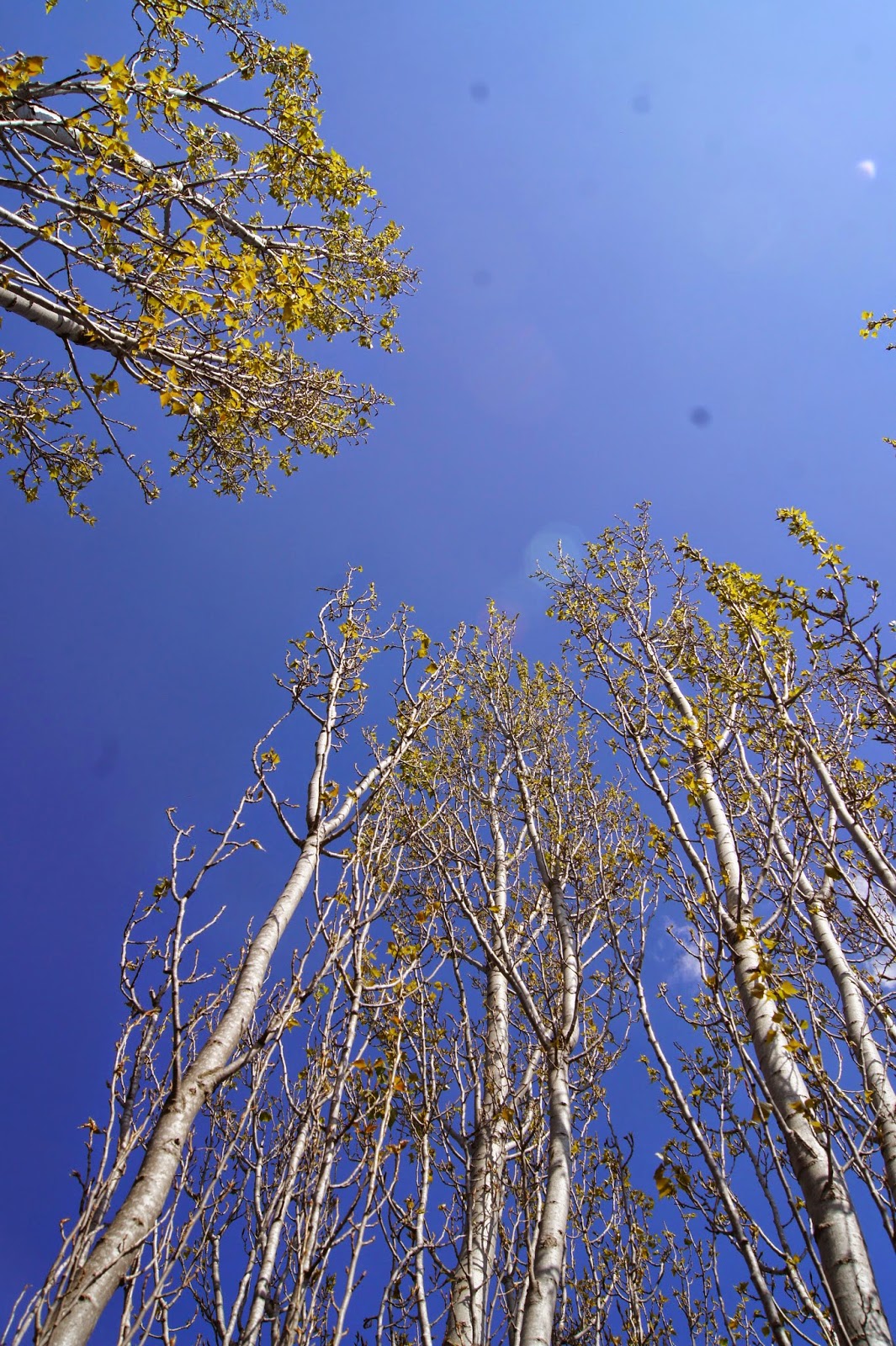 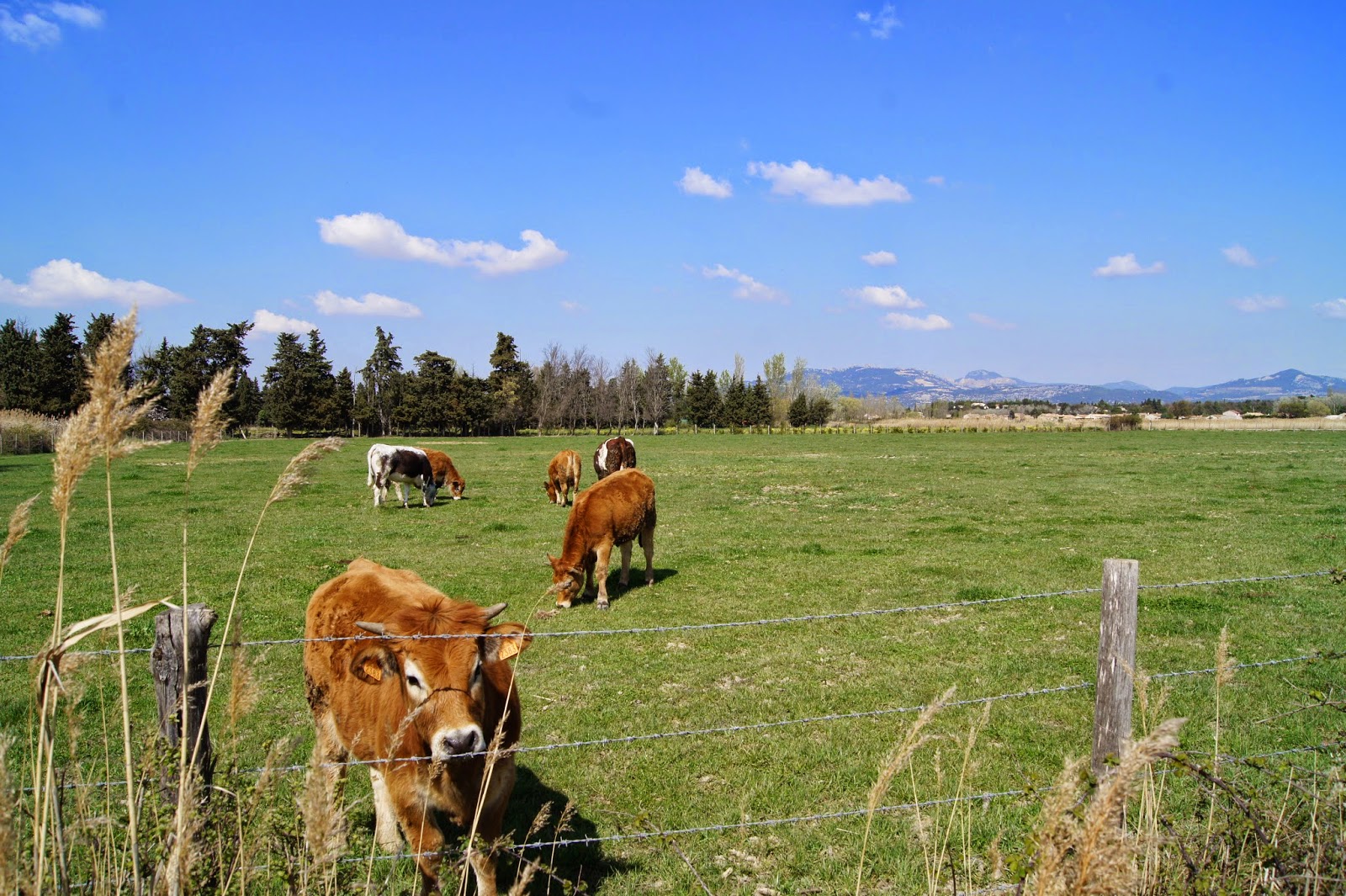 And some cows.
Actually, mostly the region is covered in vineyards, but they were barely sprouting leaves yet. 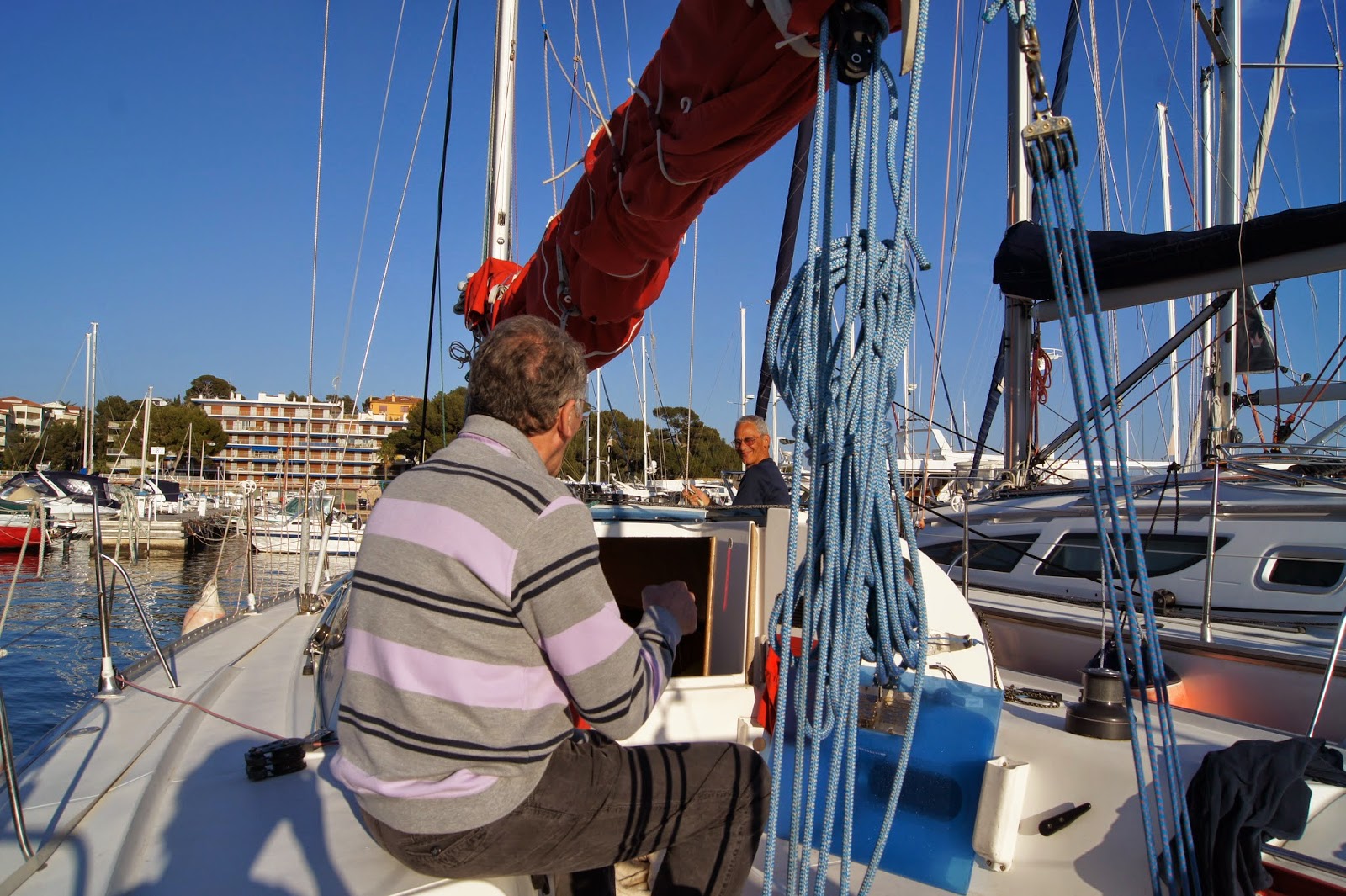 After just time for lunch we continued on to the port at St Raphael, where JP's cousin Michel has a boat. 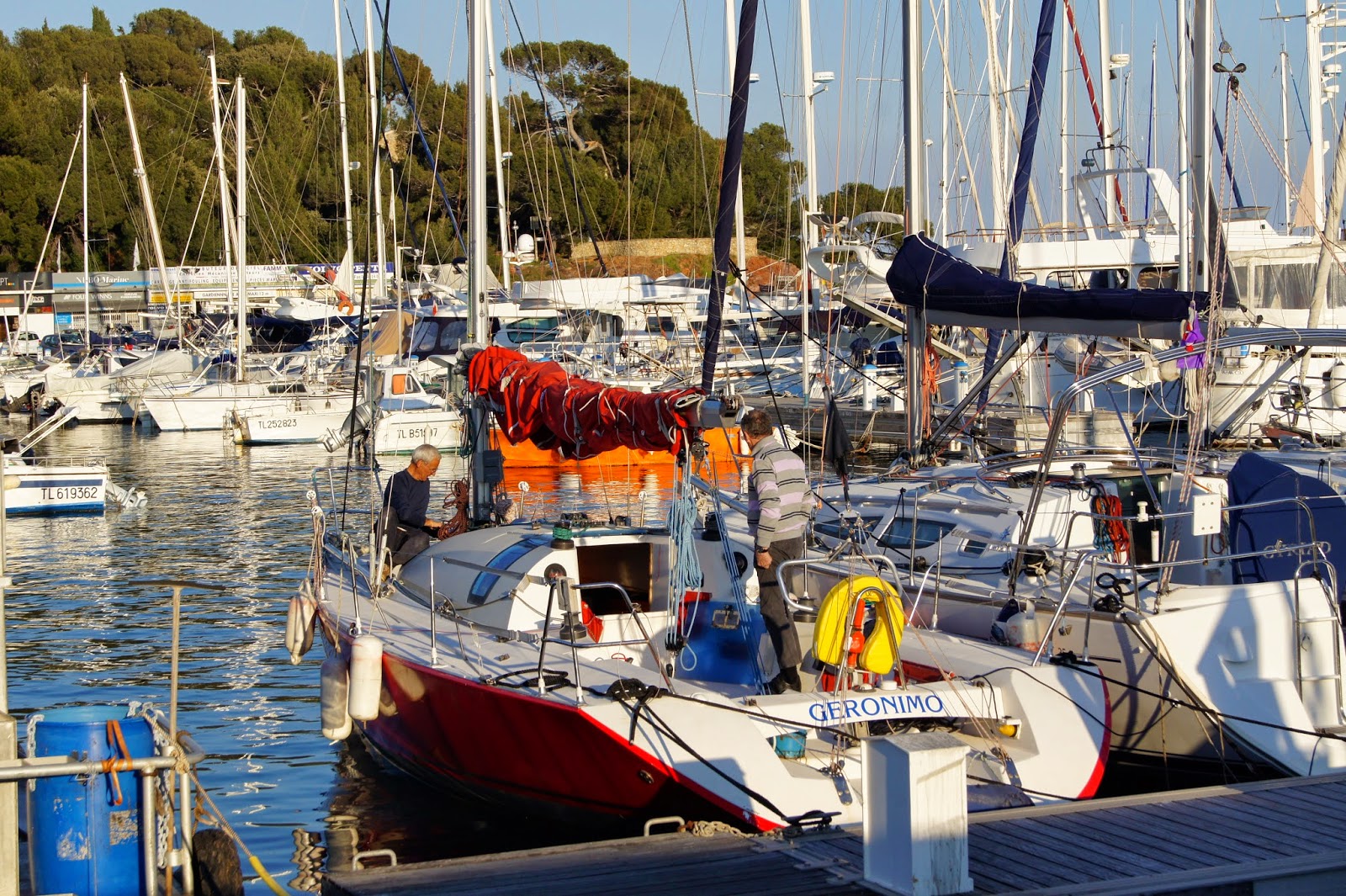 Not just any boat, a racing sailboat that needs its mast repaired before next week's regatta in Marseille. They spent some time undoing all the ropes and pulleys in preparation for de-masting the boat, so I wandered around a while & here are some miscellaneous shots. 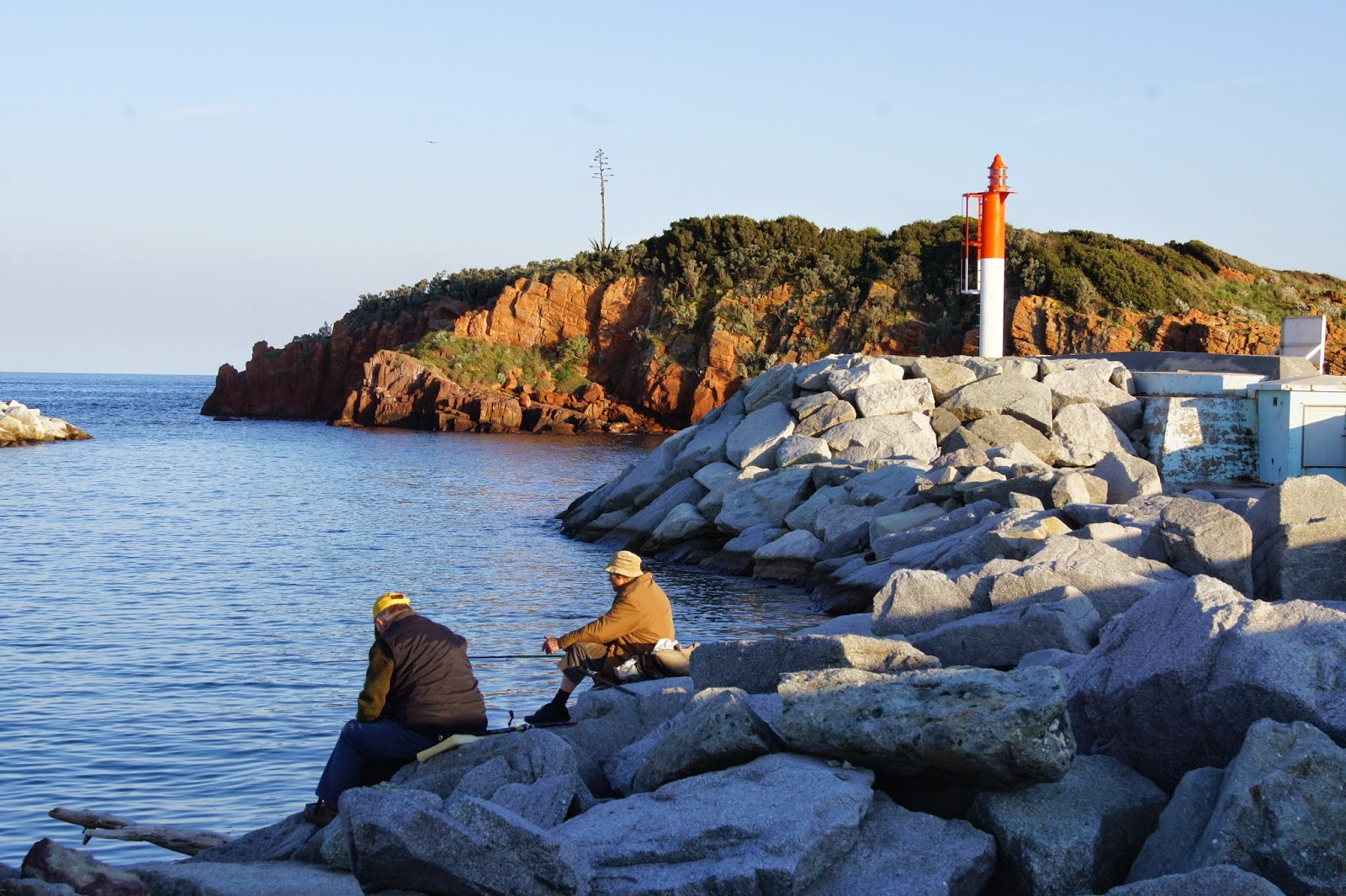 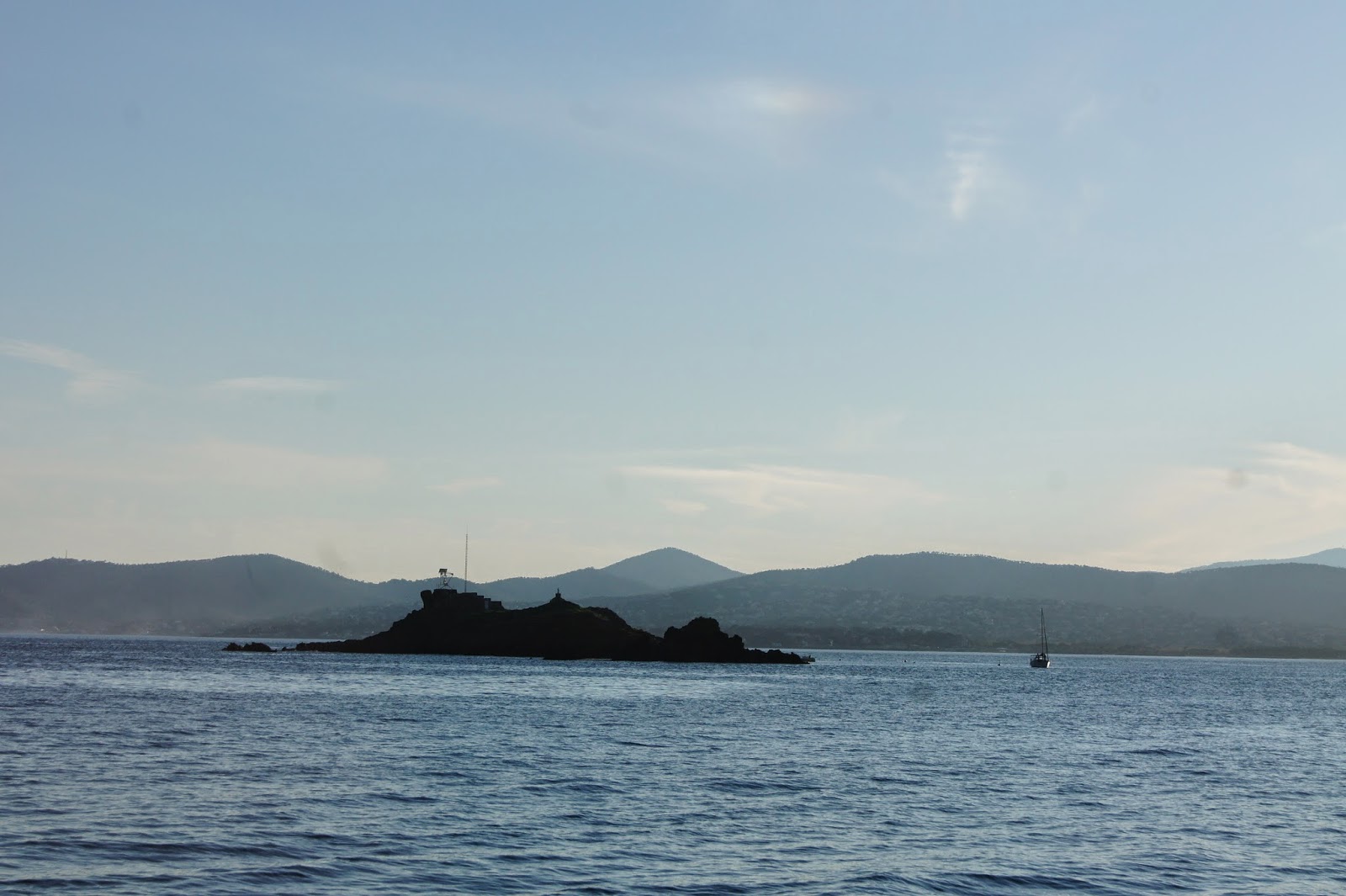 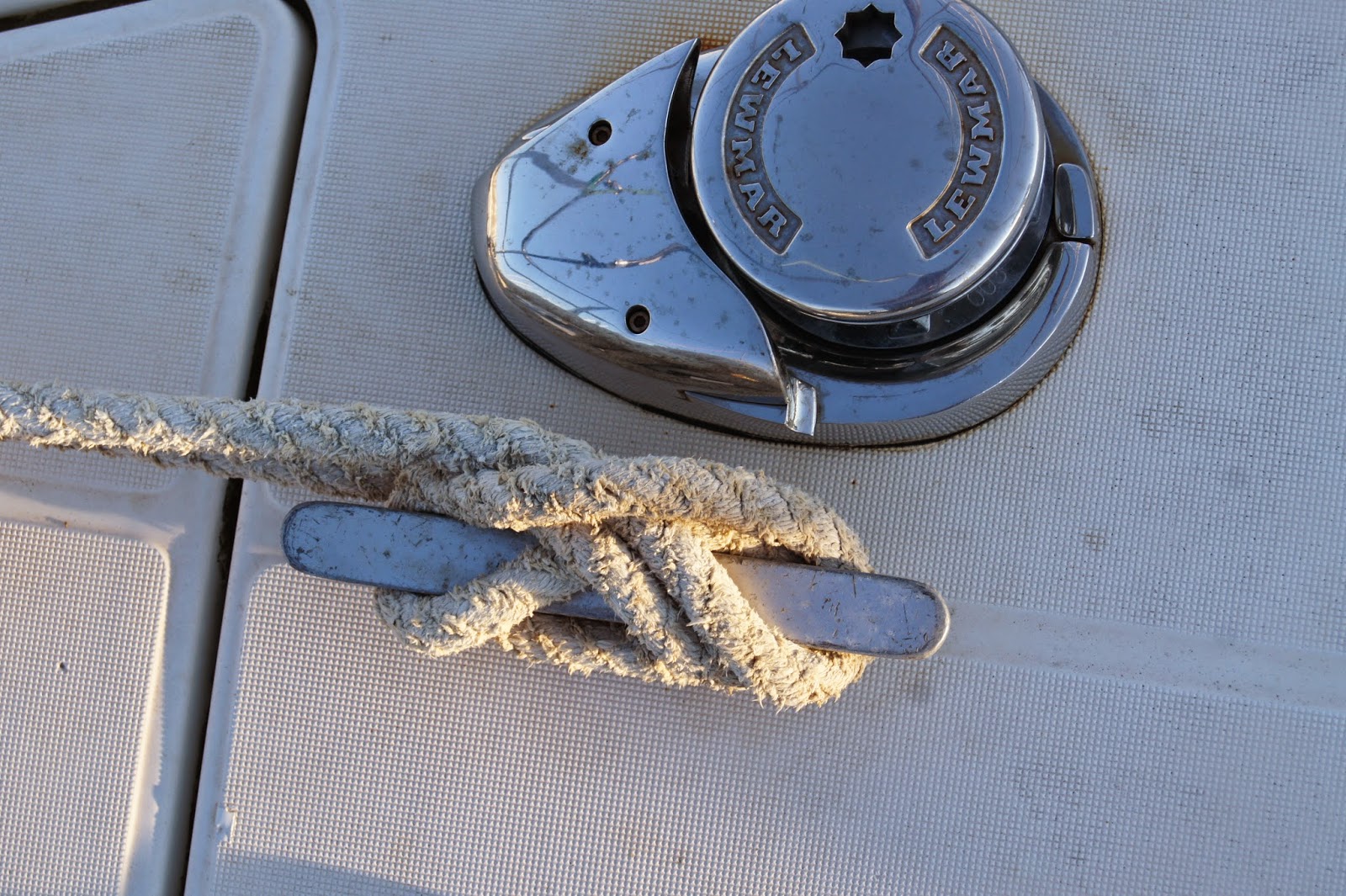 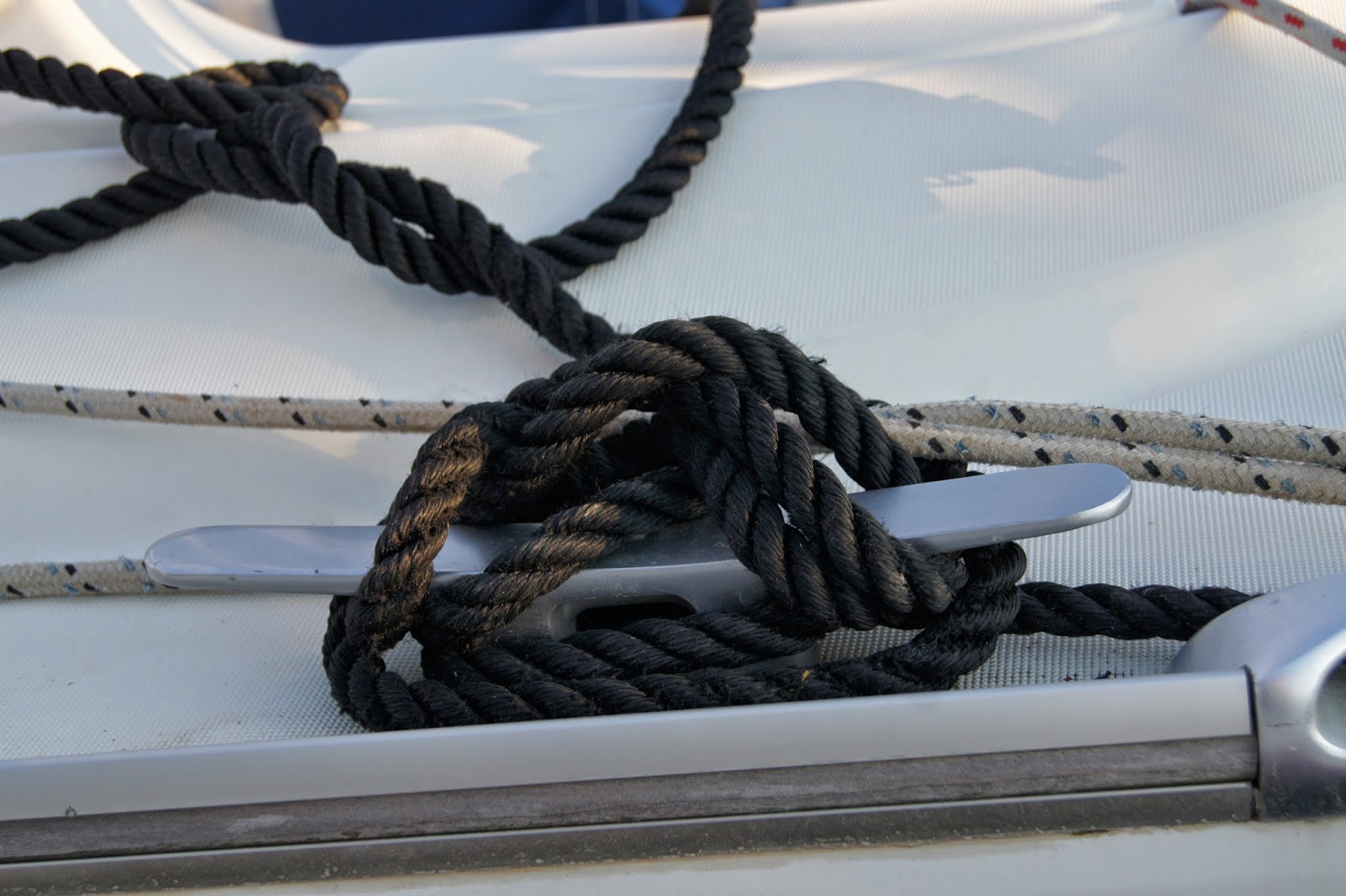