Today's Poetry Jam flavor is Summer Chillin', the good idea from Margaret. I haven't found any proper poem words, so this unwordy collection of photos will have to do.
Posted by NanU at 7:09 PM 11 comments:

This year it is possible for me to show you the totality of my apricot crop.
There's one! way up high, on its own.
Then on the other side of the tree there are two together.
Finally, there is a fourth, but
a) it's hidden by a bunch of leaves
b) it's rotten.
These photos were taken this morning with my long zoom lens. It is not at all certain that I have a ladder adequate for the picking of my prizes. Certainly I will not be making jam of them. Rather, I am carefully hoarding the last jar of last year's apricot jam for a midwinter treat.
Instead, I will be heading to the store tonight to buy peaches and ginger for another go at ginger-peach.
Posted by NanU at 1:30 PM 2 comments:

The other day, I was reprimanded for speaking English.
Yes, ok, it was rude (somewhat). but we only said a few words, spontaneously, after the hand was over and three no-trump scored.
Our opponents, women in their late 70's, may have grandchildren now spending summer internships or a semester of study abroad, but they themselves never did that. They may have spent vacations in foreign lands, surrounded by strange talk, but they never put aside their own language for the week, let alone a year. They just don't know what a pleasure (and relief) it can be to speak one's own language now and then, to speak it freely and at speed - not the careful and enunciated speech of multilingual meetings.
So we switched to French and let the little spark of home go. I don't imagine that made the lady on my left any happier: we beat them three hands of four.
Posted by NanU at 1:11 PM 3 comments:

too long haiku of several subjects piled up

the season for cherries is long gone
bicycles wait patiently
while players !crack! on the field

The Poetry Jam too, is filled with stuff stirred in together. Have some here. Spread it on your toast.
Posted by NanU at 1:08 PM 13 comments:

Yesterday’s post was written last week, actually. I’m so behind. This week around here the IMF is all Christine Lagarde. Our heroine Christine. Tall, straightbacked, straighttalking, take your medicine Christine.
And yet, hate to disappoint you Frenchies, but it’s time the IMF went truly international. Non-European, that is. The fund is not your pet. You’re its biggest clients - don’t expect to control it as well!
Besides, if there’s one leader in France with her head on straight and her integrity intact, we should guard her jealously here. Don’t let her get away. Politics these days isn’t overcharged with competence.
Posted by NanU at 11:36 AM No comments:

This one has been in the bucket from the beginning, the kickoff random sampling from the Economist (which often has something or other to say about the IMF: I mean, what issue of the E doesn’t). I’d been wondering how to work it in, what sort of alternate initials to cook up.
But now IMF is all DSK. What is it with men in power? He consented, sure! She had possibly never heard of the IMF, never seen his face on a magazine, could not care less who he was. Just another fat cat jerk owning the world. Yes, you!
Posted by NanU at 6:29 PM 1 comment: 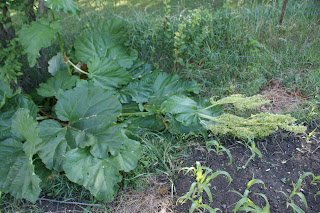 Oh no! A big wind came up and knocked over one of the Mother Ship's antennae!
Thank goodness it has a backup (to the left, rising up out of the frame).
Posted by NanU at 3:02 PM 1 comment: