I was going to post one of those stories that I sometimes do, featuring various toys doing odd things. Took all the pictures back in January, when the house was still decorated for the holidays. I just couldn't come up with an interesting end to the story, though, so it never got finished.
So here are the pix. Think up your own story. 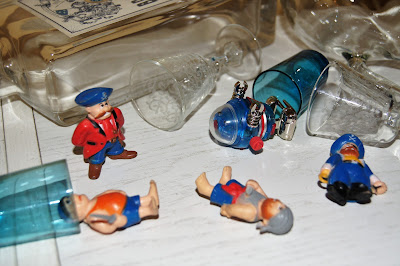 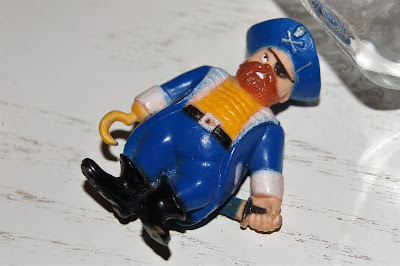 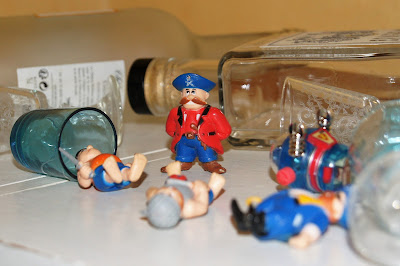 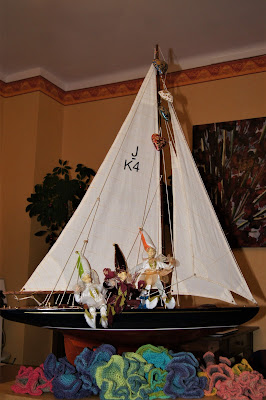 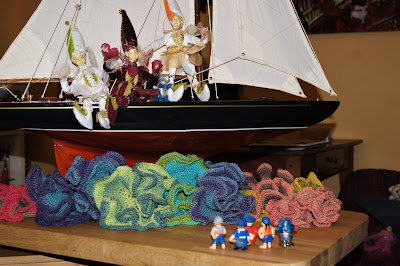 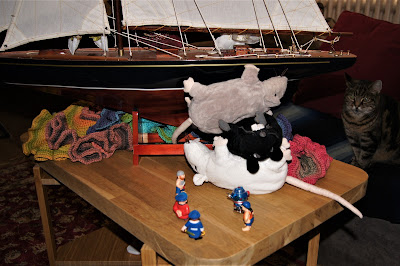 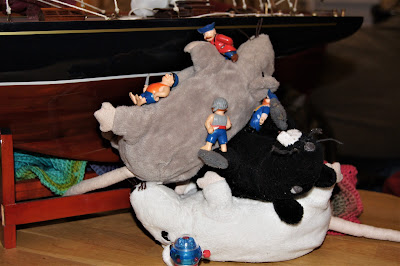 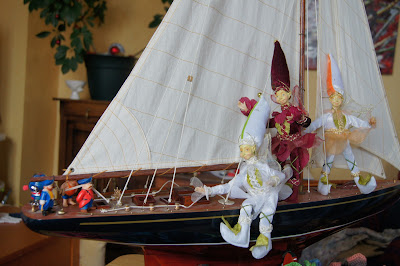 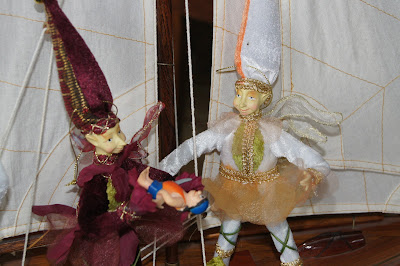 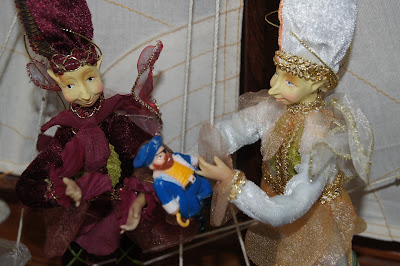 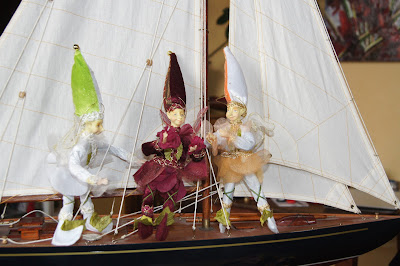 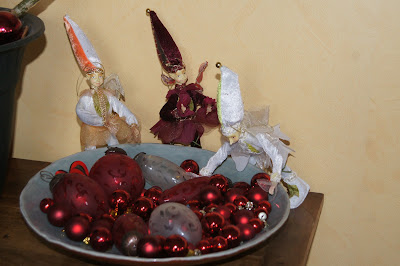 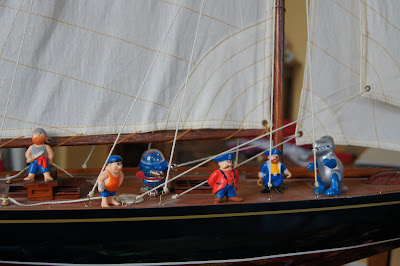 oh, is it spring already?

ok, ok, some blogging for you. yes, it has been a long time. a long, long time.
Nothing much has been happening, not recently, not since the Card Player died.

It is spring outside. Early spring has been happening since February. The apricots flowered weeks ago; they are pretty much leafed out now. Then came the cherries and the plums and they are mostly done now too. Last up are the apples.
I like the apples best, with their bright pink outer petals.
Alright, I'll tell you about the gardening.

I've been eager to get out in the dirt, though it is still officially Too Early for that. Too much risk of a hard frost, and indeed just yesterday the apricots lost a lot of their tiny fruit to the cold night.
I turned over a couple of plots of dirt, and buried old potatos along the left side of the veg patch, along the clothesline. Tomatos get too tall, the sheets get tangled in them. Spuds are short. 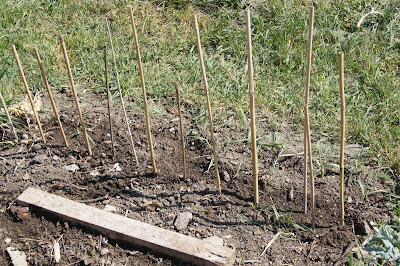 Most every morning I go see if they're peeking up yet, but they are not. Also planted are some onions, coming along fine, and peas & salad seeds. Nothing up but the onions, which I suppose is just as well since tonight again it may get to -1°C. Whenever I turn over some ground and come across a lost spud from last season, it's always got great roots, but no leaves yet. They know what they're doing.
For the aromatics, the rosemary is going gangbusters, much to the pleasure of the bees. The sage is trying to keep up, but it's set back by the cold nights. The different thymes have sprouted new leaves, and the raspberries & currents at the back have new leaves. 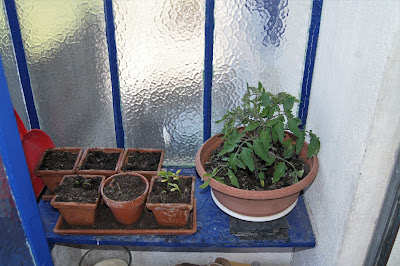 You can't resist tomatos. 70 cents a plant at the Sunday market. I've got 4, safely in pots where it's warm, and some green beans sprouting.
Mostly for the veg it's hurry up and wait.
Eggplant, zucchini, cabbage, leeks, hot peppers. All will wait. 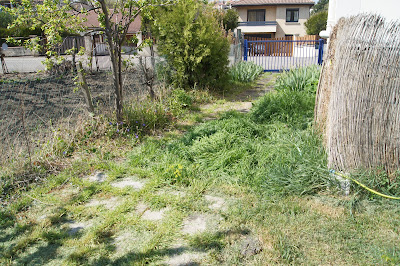 Part of why it's so frustrating to not get on with planting is that the lawn was halfway up to my knees in places. 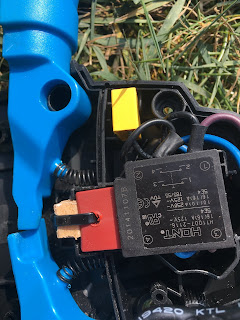 My electric lawnmower had a bad contact and was out of action or I wouldn't have let it get so wild. Jerome came over on Saturday and messed with it. A broken bit of plastic was all it took for nothing to work. So he took a bit of wood and stuck it in there where the plastic used to be and now the thing turns on when you squeeze the handles, just like it used to. As a nice knock-on, when I release the handle it doesn't stop immediately. It'll stop in a minute if it gets jiggled right, but with a solid hour of mowing ahead of me, it's a relief not to have to squeeze constantly. Yesterday the mowing took 2 hours, and I didn't quite finish, but took off instead with Mericia to go shopping. 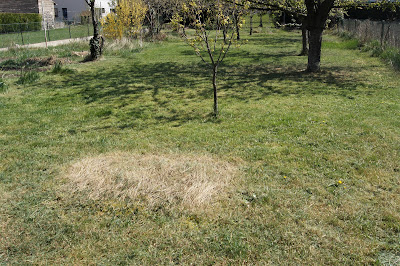 In previous years, you may have noticed the unmowed patches left here and there. Cat playgrounds! Used to drive JP nuts; he thought it looked sloppy. Yeah, so? Well this year I decided to change the areas for not mowing. So I shaved off the patch by the apricots. Ew. Now that looks shabby! The larger areas at the back I didn't completely mow, just gnawed around the edges. And then I left three new patches, places with interesting flowers growing. we'll see how that develops.
Then the other thing that makes it seem like it should be past time already to get the garden in, is that the flowers are all coming along fine. The daffodils have come and gone. The tulips and the camellia are in full swing. The irises and lilacs are about to burst. Those renonculus and poppies in the planters don't count; I picked those up at the market last weekend. Gotta plant something. 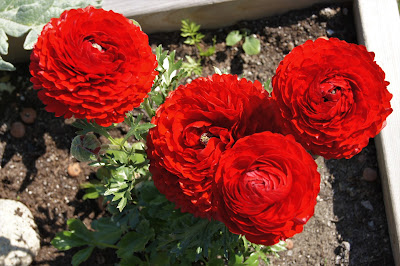 I have a section full of azaleas and rhododendrons, but they're not doing well. I think they get too much sun in the afternoon (though not until 3 pm, because of the shadow of the house). Maybe I can move them (but where to?), maybe they don't have the right soil (possible, though I have added bags of the 'right' dirt a couple of times). If the lilacs would just grow faster and get some shade going, that might do the trick. I have a deal with Mericia to trade lilacs this year. She likes the white ones, and I like the dark ones. She has only dark ones in her yard, and whenever I shopped for lilacs at the gardening stores, they never had the dark ones. So I have white and pink and 2-tones. We'll cut each other bouquets in a couple weeks, and if you're nice to them, lilacs will sprout roots from cuttings. Then I may just plunk a dark lilac among the sad rhododendrons and let it take over.
The worrying thing is there's no water. In February I emptied the tank that collects water from the roof into the well, thinking that the rain would fill it again long before I needed to water the yard. No sense in sending the overflow into the sewer system. Usually it rains plenty in March & April.

We've barely had a drop since. A drizzle now and then. I've not yet set up the pump to draw well water, but I've had to water since March, and I am on to my summertime habits of collecting grey water from the kitchen and warming my shower into a watering can to empty on the yard later. Some people will not understand the sense of these measures. Just run the tap! But what did Granddad's conversation revolve around, when I was a kid? Undocumented laborers, and the price of water.
ooo, I almost said a bad word. "Wetback". My grandfather would never have said anything else. It seemed like such an ordinary word at the time, that I did not even know it was a bad word until high school. It was just the word we had for the illegal laborers that came up from the southern border.  Not until we moved away to a different (though not less discriminatory or intolerant) universe did anybody say 'Hey!'.

And the goat is still here. She has not gotten away yet. 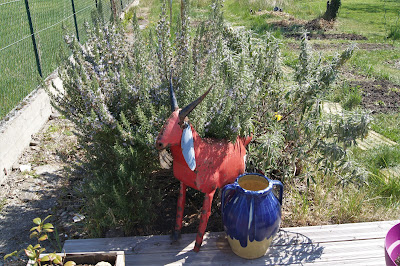