Meanwhile, out in the yard

The deck is very nice. Love the sound it makes when you walk across it. We got the table moved onto it with the help of a friend, and have thus far used it for lunching on just twice. The weather has been poor, and dining out in the yard is just not happening very often. Once it warms up, we should be out there a lot.

In preparation for many fair-weather meals to come, The Card Player bought me an early birthday present – a raspberry-colored parasol. Now that the table is not in the shade of the cherry tree, we need to make shade for it. Fix one problem (chair legs sinking into the ground) and create another (sunburned head). Parasol is still in its box in the basement, waiting for a sunny weekend.

A walnut tree sprouted in the yard. I like walnuts and would be happy to have a tree of my own. It needs to be moved, though, having decided to come up in the middle of the veg patch. Where to put it is a good question. Walnuts make cold shade, so don’t count on many veg growing under it. They also get pretty big.

I have a big yard, but it’s fairly crowded with trees already. Cut down five so far and there’s still not room for a big old walnut.

For the moment I’m going with walnut-in-a-pot. Probably should have got a bigger pot. In digging up the sprout I realized it’s probably been there not just one year like I thought, but maybe three or four. I’m frequently chopping sprouts from the plum tree right on the edge of the veg patch, and the random apples that come up from the compost, and the wild roses that keep coming back again and again. When they’re really small, who knows what they are? I did not get an A in botany. The plums are the worst, since they come up from the root system and not from seeds. Every week I’m dealing with wannabe plum trees.

Anyway, I ripped it out of there and we potted it. There was a lot of damage to the roots, but so far it’s looking ok. Perhaps I’ll let JP torture it into a sort of bonsai. He might like that. At any rate, the pot matches the parasol. 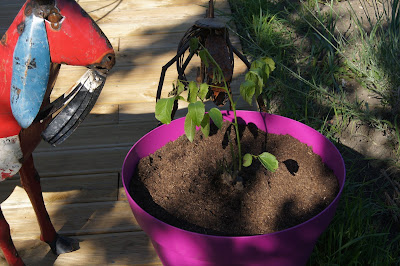 So very much to say about all the ridiculous politics going on. The impossibility of communicating with people, the dissemination of lies and how lies become truth to good-willed people who just haven’t looked any farther. So much to rail against, but who will be persuaded? The Others who need persuading don’t read this blog, and even if they did they would just persist in believing their lies, labelling me the poor misguided schnook.


I don’t have any kittens. My cats are old, though they do play with string. This really annoys me, because I knit, and because I have a considerable stash of yet-unknitted yarn that I would like to be able to keep in pretty baskets without having said baskets dumped out all over the floor, and said balls of yarn all knotted up and damaged.


And you spineless Republicans, your party has been hijacked; it’s been perverted into something unrecognizable. You’re OK with that, out of “loyalty”? To whom? Not to this country! There used to be a time when I would look at the candidates, and I’d think, well, that’s a good idea on the Rep side, and this other one is good on the Dem side: if only all the good ideas could go together but I’ll have to vote for the one with the most good stuff and hope that bipartisanship will take care of the rest. These days the GOP just makes one cringe in horror.
Ah, time to go home and see what the felines have barfed on today.
Posted by NanU at 5:02 PM 1 comment: