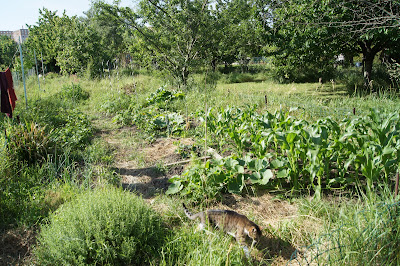 Cherry season is officially over, but the vegetable patch is finally getting going now that it's a bit warmer. 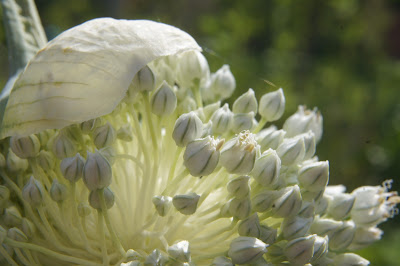 This is one of last year's leeks that I never harvested. Two of them waited out the winter and are now flowering. 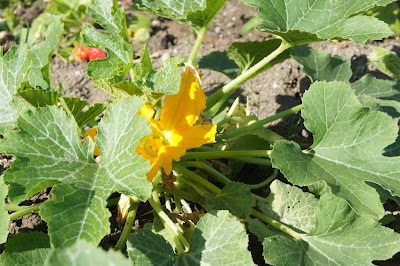 Some squash on its way. I forget if this is the sort-of-pumpkin or the zucchini. 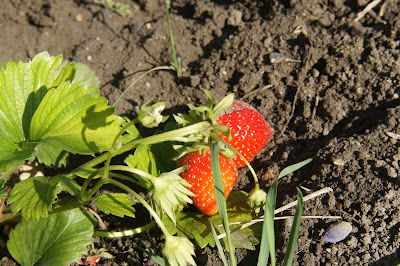 Strawberries! The plants are still very small, as I neglected to fertilize with compost before planting this year. Just wanted to get to having plants in the ground, but that's a step I'll not skip next time. I've been eating the berries one or two at a time, as they've been ripening. Got to be quick to beat the slugs!
Posted by NanU at 6:53 PM No comments:

I've been keeping an eye out for the hedgehogs in the evenings. It's been more than a week since I've seen one nosing around the edge of the lawn, or amongst the lupins. Perhaps they were just passing through on some spiny transcontinental adventure.

Yesterday I was out taming the front yard a bit (always only a bit; it would take serious work to really get it into shape, and the back yard where I can eat the fruits of my labor is so much more interesting to mess with), and I noticed a smell. It was the smell of the dead shrew left by the waste bins, only much bigger. So I looked around in the weeds for some other body, and there it was.
One of the hedgehogs! Quite dead.
They are much less cute all deflated.
I wondered what might have done it in. The cats do leave them alone. And then I remembered: a few days before noticing the first one, I saw my rose buds were utterly covered in aphids.
There are only two chemical products I use in the yard - some Roundup for the weeds that sprout in the cracks in concrete & can't be pulled, and anti-aphid stuff that I use quite sporadically. And I had sprayed the roses in the front yard, sprayed them good, just days before the hedgehogs made themselves known. I just may have done in my little insectivore buddies.
I feel awful about that. I hope the others got away.

Once it stopped raining on Sunday I went out to harvest some cherries before they all rot. Such delicate fruit - they go from not ripe to rotten in just a day when it's wet out. I got pretty soaked from shaking the water off the leaves higher up, but such is the sacrifice for cherries. My next free evening is Wednesday, and anything left by then will certainly be moldy.

At one point, I moved the ladder and provoked the shrieking of the hedgehog who was hanging out in the tall weeds along the fence. Another one!
Or maybe one I'd seen before. It's hard to tell them apart. The only way I know there are at least three of the little guys is because I saw three at once the other day. Perhaps there are thirty.
Well maybe just three. They get around. This one quit the cherry tree proximity and proceded to waddle along the edge of the mowed area to end up by the grape. Just waddled along, bold as you please. Not hiding in the weeds or anything. Took about ten minutes, so one could cover the whole yard in a day if it wanted the exercise.
Bandersnatch was out keeping me company, and Natalie came by once or twice, but neither cat paid any attention at all to the hedgehog. They must have a deal set.
Now when I look around the yard I'm likely to notice the small, grey-white, potato-shaped things nosing around in the flowers and the weeds. They're everywhere. They're taking over.
Posted by NanU at 1:13 PM 3 comments:

What have we here? 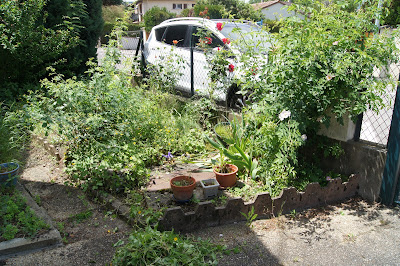 So I was out in the yard this afternoon, thinking to pull out some of the rampant weeds from the front flower patch, and I started in around the hatch to the water meter, when I heard this loud screeching-sort of sound. I though it was some large bird, hidden in the pine tree. It kept calling, and it was really close, but I couldn't spot it through the dense foliage.


Then I looked down. 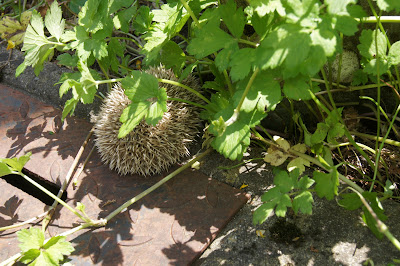 I have hedgehogs! I was practically standing on them.
They're so cuuuuuute!
And my gosh, what a racket. 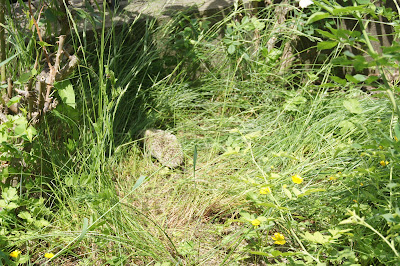 There are at least three, possibly more. They like the front yard quite a lot, it seems, which is a good enough reason for me to leave it alone. Well, I did pull out most of the vines that are beginning to strangle the roses. Can't have that. But the low-growing stuff I figured I wouldn't sweat.
Hedgehogs!
The cats were right there, and feigned not to notice the prickly little guys.

Oh, yes, the much-anticipated cherries are out. There aren't that many after all - the tree at the back has about none, and the one at the front is very lightly covered but as it's a large tree that's still 6 pots of jam already put up, and a quart of dried ones, and as many as I can gobble down before it rains tomorrow and they all explode.
Posted by NanU at 3:57 PM 4 comments: