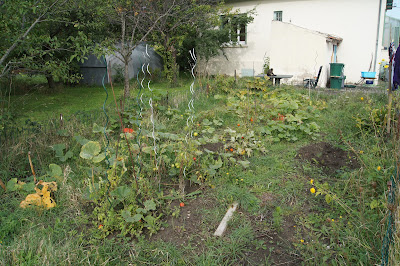 Well, it's the end of September, and autumn is upon us. The garden is about done, as you can see, except for the pumpkins, potatos, and the odd straggling tomato. Tomatos were poor this year, flavorless and dry. The potato patch is always a surprise - you never know until you dig. The plants didn't look like much. The didn't get very big, and didn't put out many flowers. A whole section didn't flower at all. But I dug up a bit of the patch, and there's gold down there. I made fried potatos with onions and sausage last week. Tonight it's potato-rabbit stew. 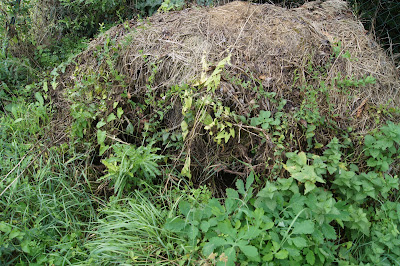 The hedgehog hasn't been sighted in three weeks now, but that's not unusual. I figured out his nest is under the compost heap at the back of the yard. There's the pile, all neglected instead of turned over like compost *should* be. You can just see the nest entrance, but it seems to me that the weeds in front have overgrown too much for the entrance to be used regularly. 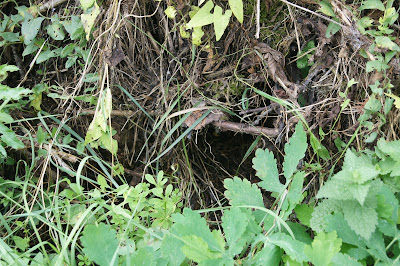 Anybody home?
No?
Perhaps they're moved on.

In the spring I do need to harvest the bottom layer of compost for the veg patch. I hope that doesn't chase them away for good.
.
Posted by NanU at 11:57 AM 1 comment:

One has to laugh (after a fashion) at our attempts to get the lab in shape for accreditation.

One of the things we have to do is establish contracts, or less formal but still written agreements, with all the different support services on which our lab depends on in the heart of a larger establishment (for example, the Human Resources, Logistics, Purchasing, and Suchlike departments).
To have such a contract, with the supporting department, however, assumes that these departments actually support us.
One wonders.
Really.
We were worried that we wouldn't have the description and proof of validation of our lab work up to snuff, given that's a big and hairy document to write. But noooo, at least we have control over what goes into the Methods Validation chapter. It's just a question of hours at the computer to get it together. It's our own administration that's the real sticking point.
.

It must be, what, three weeks already? that I finally joined the 21st century.
There was an abortive attempt last Christmas (or was it indeed the one before!) where I bought a really cheap cell phone that you feed with cards from the grocery store, thinking, Hey, I don't phone often, I have no need of one of those fancy things. It's only to take along when I go up to Paris and need to ask to my parisian friends what the door code is. And then the cheapo never even made it out of the box. Seriously! The ugly plastic bag with the object still inside is still sitting there next to the tv. I should do something about that, really.
Then I joined the Rotary Club (did I tell you about that? I should some day.), and somebody or other is always calling me. And if they can't reach me, they call again. Now, I prefer email. Phones are not my thing. I can't hear properly with them, especially not in French (today is Parentheses Friday, if you didn't know, and I'd like to note here the way we used to laugh that my granddad could hear better in Spanish, but now I understand perfectly what that means). But my email is (was!) tethered to my work computer, and I'm not always in my office, so it's an insufficient method of communication.
So the inconvenience of not having a cell increased tremendously over the summer, passing that tipping-point (which believe me is way on the side of not having a phone), and there I was in the store actually seriously looking at phones. Yeah, I'd looked at them before, but just sort of sidelong and not really interested in a long-term relationship. This time it was to Pick One Out.
I wanted a red one, but the only red ones were icky and lame.
And I figured that in this age of texting and email on phones and so forth, that the phone function may be secondary to having text in my pocket, so it's a keyboard version for me. Yes yes! from cheapo phone-only to pocket computer.
So here I am. Phone/email/Facebook/GPS/camera/fricking television if I want it.
The first couple of days I had it on constantly, checking Fb, checking how I did at bridge, useless nonsense. What I don't know how to do yet is actually answer a call. I can call back, that's clear enough. But which icon is it to pick up??? the little green phone seems to send me to my directory... Whatever. I still have the landline, so tonight (or maybe next week) I can sit around & call myself. Once I am competent to answer the phone, I'll give the number out more widely. For the moment, dropping calls from the Rotary is enough.
.
Posted by NanU at 6:29 PM 3 comments: