The return of JP

May as well say so. It's all over the bridge club anyway!

It’s not an easy thing to explain. In fact, I wouldn’t have thought it possible either. But once you’re inside the situation, you get a new perspective. Country songs start to make sense.
Perhaps it would have been better to stick to No. Only time will tell.
But there’s a lot to be said for trying to work things out. Perserverance, understanding, communication. This didn’t kill us, so we might come out stronger.
Or we might come out papering over the more threatening cracks, you say. If the foundations of trust have been so damaged, they might never be solid again. Rather than taking on water through a gaping hole and sinking in a flash, we’re leaking slowly for a gradual, more gentle shipwreck. Well. In that case at least we can hope to make landfall before drowning.

We will acquire new coffee cups, surely.
Some distance will be maintained, more time given to our independent lives. The partnership requires a rethink, a redesign, but we can do that.

I barely knew my uncle Pete.
We always lived so far away, I rarely saw my uncles and aunts and cousins when I was a kid. We never phoned or wrote letters, in either direction. That’s not true. There were cards for birthdays and Christmas. I really mean letters and calls just to talk, conversations that make you know people.
That I know about. Maybe my Dad did; they’re his relatives. Maybe he and Mom chewed over the news from Indiana from time to time. But little trickled down to the kids. Those names of people we didn’t know didn’t concern us. Perhaps names came up, but they didn’t stick, nothing to stick them to.
We’re the ones who were detached.
I did meet them all. There was the time Grandma came to visit with adolescent Aunt Minnie in tow. It was a grand occassion. We all piled into the car and drove north for hours in the rain to visit Disneyland. I’d never been there and it was finally my chance to catch up to all the kids at school who knew the place like their own backyards.
Of course, in the pouring rain, Disneyland was closed. All the way to the parking lot entrance we held to the belief that Disneyland would be open. It could not possibly be closed, in spite of the acres of empty parking lots we passed by, and the lack of lights burning cheerily in the gloom. We drove all the way up to the barracaded entrance. Closed, the Happiest Place on Earth. So we turned around and drove back home again, the young people almost crying in disappointment and frustration. The sun came back a day or two later, but we did not go back to Disneyland.
Then the time Grandma got married and we went on a road trip across the entire country to see her and Russell in their new West Virginia home. Stopping off to see all the family in Illinois & Indiana on the way, we did mingle with our cousins for a week. We picked blueberries and sat on stoops and either Darrell or our cousin Robert had to get a tetanus shot for stepping on a rusty nail.
And the time my Aunt Dorothy and her husband Kyle came to see us with their kids. My wedding, my brother’s wedding. So my Aunts Dorothy and Anna I know better than the others, then Caroline and Minnie. But my two uncles, Pete and Chuck, remain fairly theoretical. I could probably pick them out of a lineup, based more on their resemblance to my Dad than on any memory of my own.
Pete.
I knew vaguely that he had fallen ill some years ago. But I never followed up. Didn’t realize it was cancer subsequent to his exposure to Agent Orange in Vietnam. Had not known until yesterday he had been in Vietnam.


So I should really get on the ball about getting to know all these other people in my family, while I still have the chance.
Posted by NanU at 12:02 PM No comments: 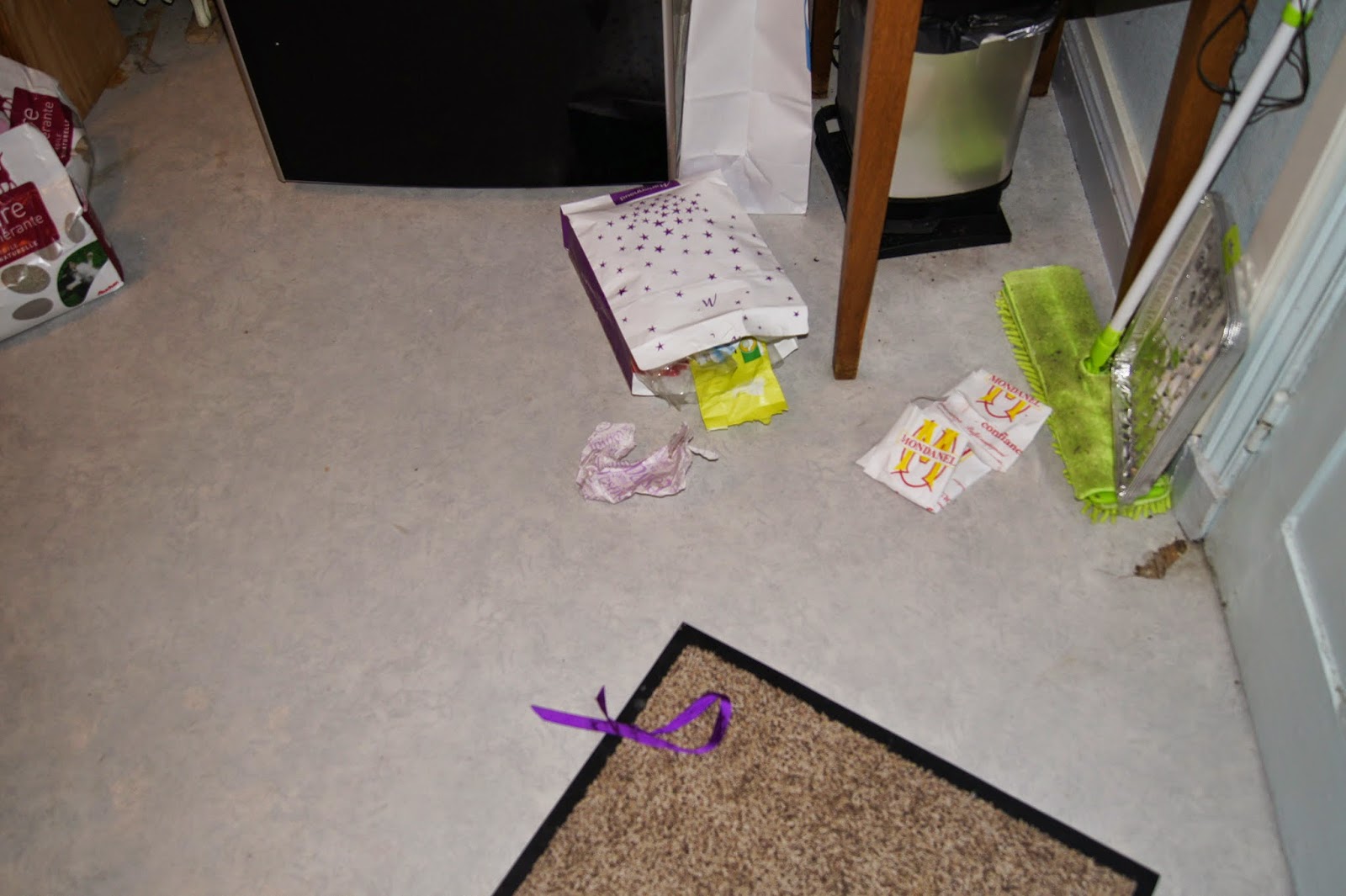 This is what happens.
You get your cats all trained not to go digging in the trash for the least bit of used butcher paper or the paper bag some buttered pastry used to be in, and then you get a new cat and you have to start all over again.
Or put the paper recycling out more often.
Like every 5 minutes.
Sometimes I think she just likes the sound of it being pushed and chased all over the kitchen floor. 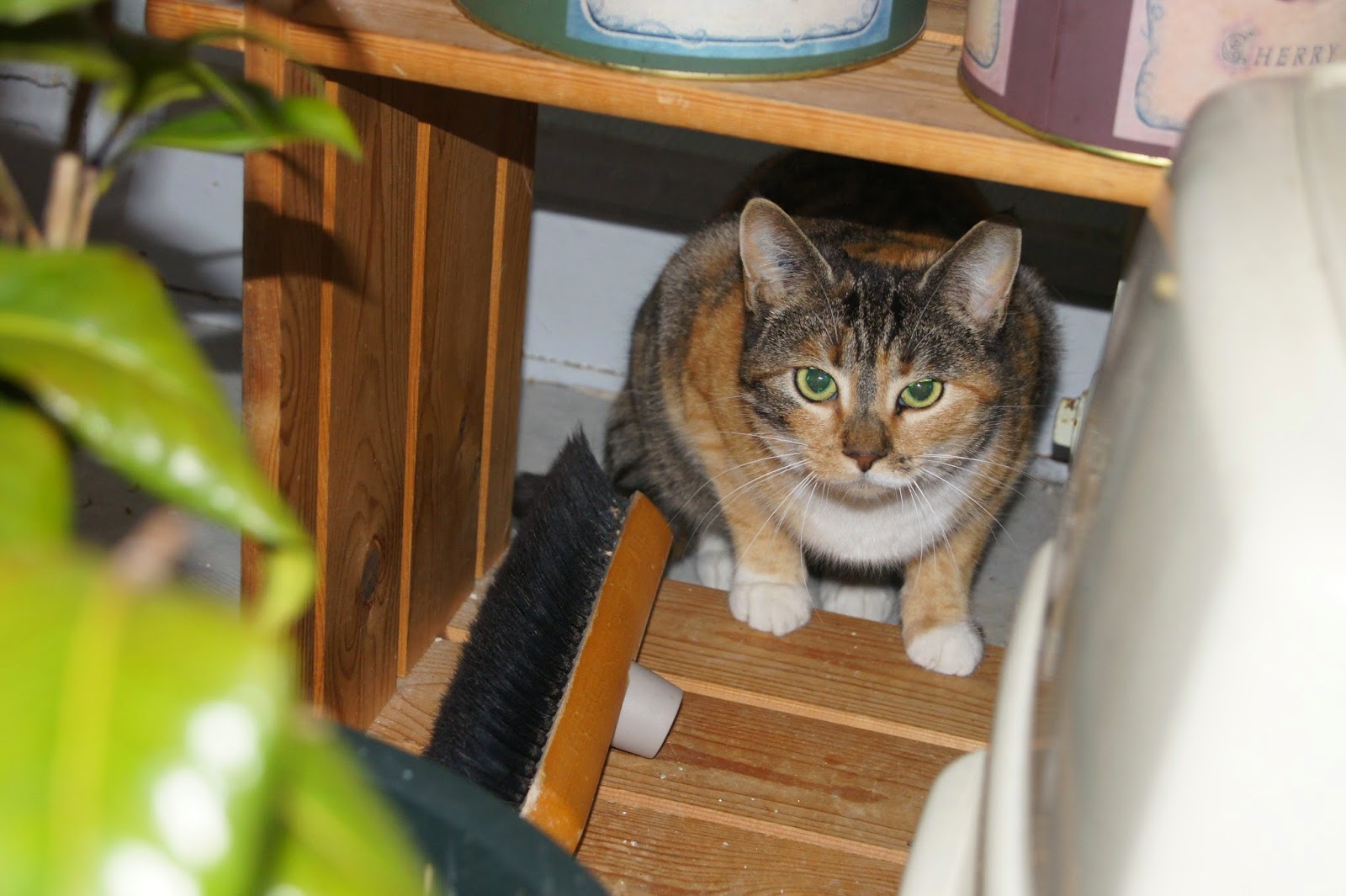 There she is! Bella.
Alright, she's not really my cat. She's gone home already, in fact. Mericia dropped her off two weeks ago, on her way to spend the holidays in England, and I just had time to snap a few last-minute pix before she came to reclaim her furry little one.
It was an interesting fortnight. Bella is sweet and cuddly, and held her own against the permanent residents of the house. No friendships forged, but nothing broken either.
I'll kind of miss having an energetic young cat running around, playing with ribbons and getting under the rugs. Mine are all middle-aged now, and while they will play with strings drawn tantalizingly across the back of the couch, they don't make their own fun anymore.
Posted by NanU at 5:17 PM No comments:

Alright.
New year, new beginning. Wash down the blackboard - all the chalk dust out and gone. Get off the couch and into the light. Hold steady. Stay zen.
And eat all the galette de roi that you can: by the end of the month the bakeries won't be making any more until next year.
Posted by NanU at 8:59 AM No comments: