Cat of the Month: Natalie.

Yes, folks, we have at last arrived at cats who do currently and really live at my house. Cats who have been digitally photographed. 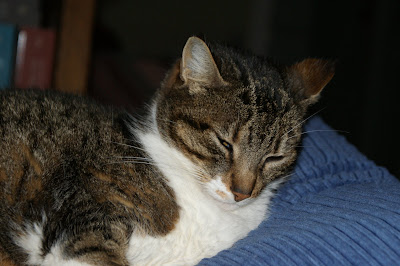 NatalieNatalieNatalie.
But, you know Natalie! She doesn’t feature quite so frequently as January’s pinup, but she’s in the blog pretty often. Usually when things involve shrews, and abandoned kidneys.
Okay, maybe there is what to say.
Natalie is a hunter.
She started off bringing in earthworms and leaving them in the kitchen. That got her the nickname Earthworm Queen for Volume 2 of Pan’s biography. Then she graduated to larger, more problematic fare. Live birds let go in the house (nasty feathers everywhere). Live but unsteady shrews that ran under the fridge. I used to have a stick to put in the gutter of the sliding door that would allow me to leave it open just cat-wide while I was out, but with Ms Natalie bringing in the wildlife I had to stop. 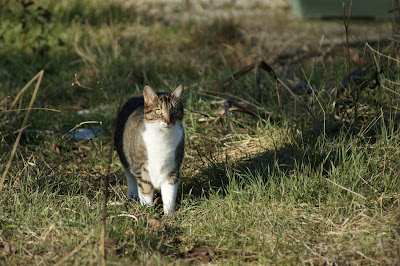 Since we moved to the house with the big yard, Natalie has been in heaven. The first month there were two and a half smallish rats left on the doorstep. Appalling, but on the good side I do think the rats have permanently given up on my basement insulation as a home. My disposal of these offerings taught Nat that leaving me stuff just isn’t worth it. I’m utterly unappreciative. Now all I get are kidneys, and the occassional entire shrew. I think Natalie forgets that she doesn’t like kidneys. She’s reminded by the first one, and she leaves the second for me. Just one.
.
Natalie is not a cat’s cat. She just doesn’t like other cats. I got her because Pan needed a companion, and at the shelter she was so sweet and affectionate I thought she’d be perfect. Well, she loves me... Thank goodness she does tolerate the others in the house, as long as they don’t try to play with her, and they offer their foreheads in submission once in a while, because she’s a terror when it comes to outside cats in our territory. Watch out!
. 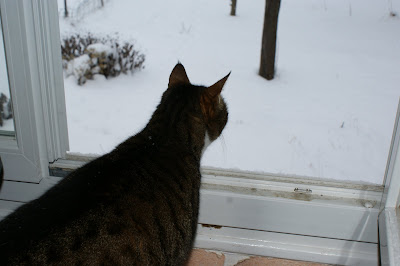 Natalie likes to change sides of the door sometime between 2 and 4 am. If she’s in she must go out, and will paw at the window for an hour if necessary. If she’s out, she’ll scratch at the front door just as long as it takes. Persistent little bugger. Now I usually don’t even try to hold out until she stops, just get up and get it over with. But when I have an early train and won’t be back for a week, we both suffer Natalie’s Not Being Allowed Out.
That's all for Cat of the Month. Stay tuned for real-time NatCat adventures!
.
Posted by NanU at 6:35 PM

Natalie knows she's Queen of the Court - quite right too :-)

awesome cool cat! i am so jealous and so are my kids!!! steven

Oh, I so know that position where you resign yourself to just getting up and giving them what they want. There's always that voice inside your head saying, It will just take a minute and then I'll be right back in my warm bed. Unfortunately, that's usually when the bladder decides it's time to be relieved.