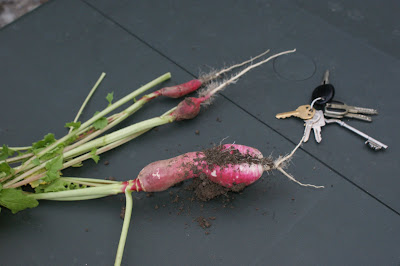 I love radishes. I planted a great many this summer, and in June and July had radish in some form every other day. Around August I was getting a bit tired of them, and in September completely stopped putting radish in my salad.
Now I'm packing up the garden for the winter, pulling up the ex-potato bed and the done tomatos and all, and I noticed that the late-planted radish patch had some pretty fabulous root veg in there. 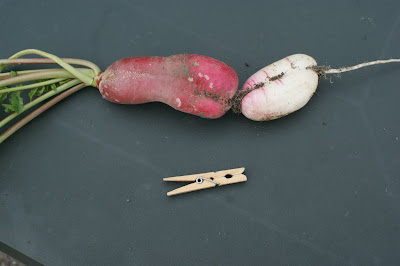 No, that's not a miniature clothespin.
I think I will still not be putting radish in my salad - these things are woody on the outside and hollow inside. Impressive, but not food! (for me, at least)
This weekend, if the wind isn't off its rocker like last weekend, I'll be having a bonfire with the wood from the branches that fell off/were trimmed from one of the plum trees. Fun! Get some ash into the veg patch while I'm at it. Last time, Bandersnatch has a frumious time rolling in the ashes and I had to deny her coming into the house all weekend.
.
Posted by NanU at 5:33 PM

I love radishes too, but can't grow them, I failed the one time I tried, anyway.

These are pretty amazing specimens, too look at, if not to eat.

For me, no matter how much abuse and neglect they get, radishes always grow. Not always edible, but there they are.

Confession ~ there are only two food items I cannot eat. Radishes and turnips. Which leave all the more for you!

you know I don't think I've ever had a radish. Whenever I do eat one, soon, hopefully, I will think of you.

You're scaring me.
They're engineered, aren't they?

I'm back a second time at your blog to leave a comment about your comment on my blog since I don't know how else to do it -- when I was writing it, I was guessing that the science pro would come back with something -- rings around the sun. Dang. Now I have to do more research.