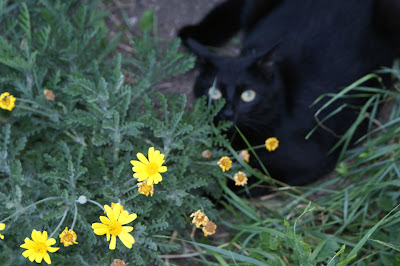 With this Cat of the Month published, it’s the end of the line. Caught up with the present time. In February, there will be no Cat of the Month. I just don’t have any more.
.
The Frumious Bandersnatch. Aka Bandercat, aka Kittybit, aka The Blob. 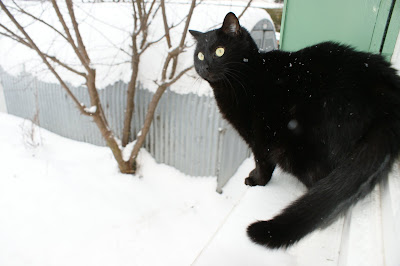 She’s so black!
She’s so fluffy! 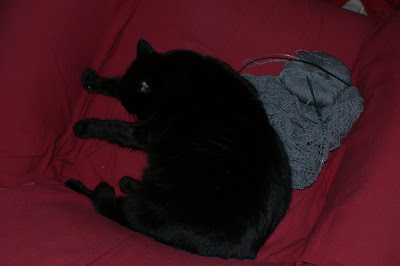 She doesn’t make noise, she sleeps peacefully at the foot of the bed, she doesn’t get into stuff.
Bandersnatch does rush for the catfood, elbowing all rivals out of the way. Even for milk, which she doesn’t particularly like. Normally Bandersnatch is a sweetheart who would never raise a paw, but get between her and the food bowls: watch out. 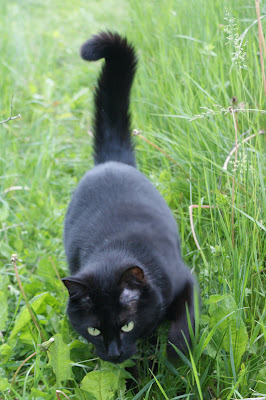 Although a frequent guest star on Pink Rabbit Abroad, where two ravenous dinosaurs dream of devouring the Mountain of Steak, there aren’t many stories about Bandersnatch. She’s just so passive. Such a blob. 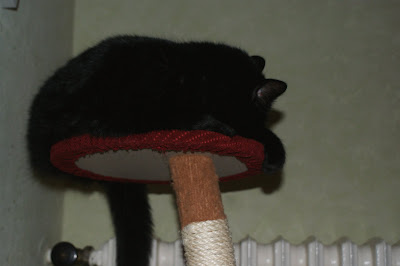 bandersnatch reminds me of one of a chain of black cats that were in my life. i remember that particular cat being chased across a field by three crows. i know they too saw steak! steven

She looks lovely against the white snow. I see nothing wrong with a blog of a kitty; she's just a good girl! :)

Yeah, she's so sweet, S-girl. She's one of my all-time favorites. I was just realizing I didn't have any stories, like the time Pandemonium fell down the light well, or the time Walter broke his leg, or Sasha and the bonker races.

How did she get her name? I love it!
We have a few blobs over here, and a few snatchers as well!
Enjoyed the photos. Too bad it's all ending.

I've always been a fan of Jabberwocky, Kat, and found therein a pretty good cat name. Don't worry, I'll be sure to blog about anything the beasts do. Just more sporadically.

Someone's got to be the blob - nothing wrong with that ;-)