The obligatory getting there. Less happening, but more time to write about it!
Elbowing my way through Paris on a Friday morning, it's such a beautiful spring day it would be a shame to go underground, though the metro would surely be faster. To favor public transport, they've put in bus corridors all over the city. My bus, however, hardly gets to use them: they've become parking strips for taxis, delivery vans, and cars just waiting, blinkers on as if that made a difference.
The stop outside Letitia and Bruno's apartment is a lane going against the flow of a one-way boulevard, and there's a moving van parked in it just before the stop. Three buses wait for a break in the oncoming traffic to go around. When my bus approaches, she stops and blasts the air horn - loud as a fire engine - until the guy lounging around (he's not actually moving anything, just waiting to) gets in and clears the road. Other buslane obstacles the driver just goes around. There's simply no gain in trying to get all of them to move. For the fine-levying traffic cops to do that (and better the fine be in cash on the spot!), not the bus driver with a load of passengers, however outraged. 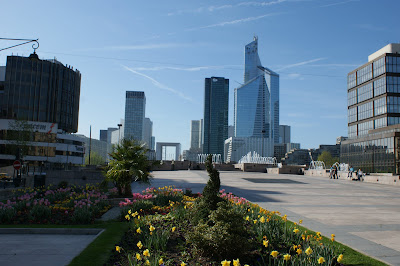 There's Paris for you.
Starbucks across from Gare St Lazare. I do love their lemon loaf, but alas they have none. What they do have is the slowest Starbuck's staff ever. More employees than people in line, but they're just not getting the American production-line service into their heads. We all want our coffee to go. We want to go with our coffee. Please take our orders. Please let us pay. And where's the half & half? Even whole milk I have to ask for at the counter, in this land of crème.
...
Once in the station, the quay for my train should be posted already, but isn't. Eventually they announce it's being cleaned and will be available shortly. An American tourist wonders aloud where the train is, and I tell him, sarcastically adding that they just announced it was being cleaned. I think he took me wrong - that my tone meant he was defective for not understanding the announcement, but really I was quite doubtful of the eventual spickety-spanness of our train. Sorry! And I was right. No room for my empty coffee cup and napkin in the overflowing trash can by my seat. 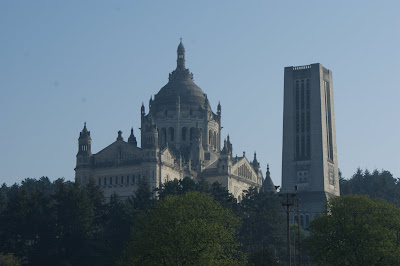 Passing through Lisieux - oh! that looks interesting! - but it'll have to wait for another trip. Only ten minutes to change for the train to the surf and turf of Deauville/Trouville. 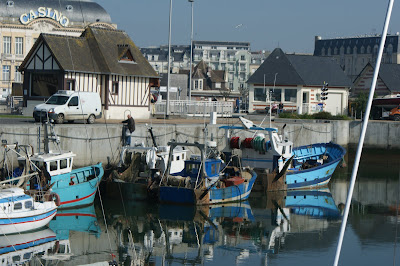 And here it is, pleasure port of the well heeled or trying to be. A rapid turn around the boutique town, a hotel room reserved, the marketplace seen, a message to Letitia I'm staying here overnight, a quick lunch, and it's off for 20km in the gentle Calvados hills and along the coast. 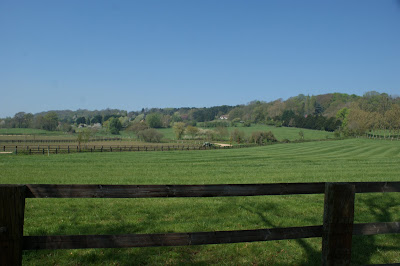 There's reason people like it here, and it's not just the racecourse and the casino, right? 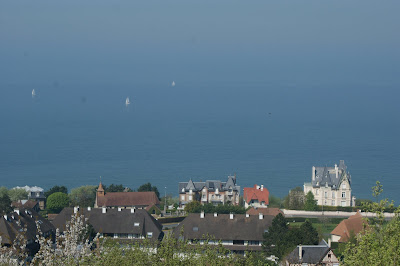 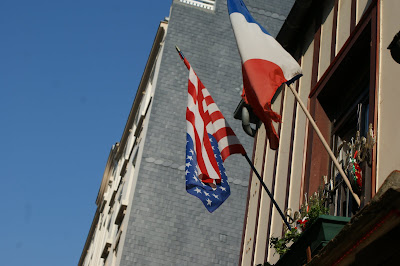 This is just so wrong. Some company actually sells American flags attached to the pole the wrong way? Or are these people making a statement of some kind? 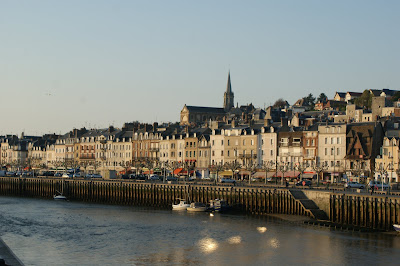 More tomorrow, or possibly the day after.
Posted by NanU at 7:13 PM

nancy - this is the essence of what is characterized as "the stutter-start". i can't wait to know what is awaiting you. steven

maybe they were cleaning the platform and not the actual train?! It's just another possibility...
Gotto love that friendly efficient parisien service! :-)